Not all “Captain Chaos” but much confusion, concern on post-Budget health issues

There’s plenty of confusion, contention and concern emerging still out of last week’s Federal Budget on health, with particular uncertainty around after hours GP services.

Here’s a quick wrap on some of the issues – complete with glossy illustration from the government’s (once far more dreary-looking) official Budget website pages. Health doesn’t get a big focus in the glitzier snapshots, but at least ‘Mum’ is a nurse by the looks.

(Please note: the original article was updated with confirmation that the After Hours review was made public only last Friday).

The much-awaited Review of after hours primary health care by Professor Claire Jackson was finally made public last Friday 15 May, six months after it was submitted to the then Health Minister Peter Dutton on 31 October 2014.

According to this Health Department FAQ guide to the review and the government’s responses, Jackson’s key findings were:

The Health Department says the government has so far accepted four of the review’s 12 recommendations:

The Commonwealth resumes responsibility for after hours funding of general practice from Medicare Locals from 1 July 2015.

A revised Practice Incentives Programme (PIP) After Hours incentive is accessible for accredited general practices from this date.

The revised PIP should:

Performance Indicators for this PIP should be outcome-focused and easily collectable.

The final design of the revised incentive should involve consultation as soon as possible with the PIP Advisory Group (PIPAG).

The After Hours GP Helpline (AHGPH) was incepted to relieve after hours pressure on regional and rural general practices (GPs) and support GP continuity of care.  However there is limited evidence that this has occurred.  Direct Commonwealth funding to the AHGPH should not continue in its current form beyond the completion of the 30 June 2015 contract, with funding reallocated to support innovative after hours services delivery locally.

A need to relieve pressure on GPs in regional and rural areas and improve the continuity of care after hours remains a priority.  Therefore population based after hours planning should identify the need for GP phone support, best linkages and application.  Innovation funding for this purpose should be available for PHNs that submit, appropriate applications, endorsed by local stakeholders.

The department says the “remaining, less time-critical recommendations are still being considered by Government.

But time is a major factor in the assurance from the Health Minister Sussan Ley that Primary Health Care Networks that will replace Medicare Locals will be paid to plan, coordinate and support population-based after hours health services, with PHN contracts still being negotiated, less than six weeks before those new arrangements needs to be made.

Hunter Medicare Local welcomed the Minister’s statements that the government is committed to see the service continue but warned:

Opposition health spokeswoman Catherine King criticised the abolition of the GP After Hours Helpline, saying over 200,000 calls were made to it last year: providing reassurance to parents and patients and helping reduce pressure on emergency departments. “Worse,” she warned, “it comes weeks before Medicare Locals are also to be wound up, taking with them their GP Access After Hours service.”

The AMA led the charge against the Federal Government’s decision to fund the new Curtin University medical school in Perth.

AMA President Brian Owler said the AMA and the Australian Medical Students’ Association (AMSA) had been opposing this proposal for many years.

“We need training places, not new medical schools,” he said. “All governments must focus on increasing prevocational and vocational training places instead of pumping more students into the system when the training pipeline is blocked.”

Owler said the decision cannot possibly be based on any medical workforce planning recommendations. It certainly can’t be informed by Health Workforce Australia, which was shut down in last year’s Budget.

The AMA President stepped up his rhetoric a little more in the media, labelling the Prime Minister Tony Abbott “Captain Chaos” over the issue. It prompted this rebuke for the language by Treasurer Joe Hockey and this analysis in The Australian noting “a new turbulence in relations with government under the presidency of Owler’. 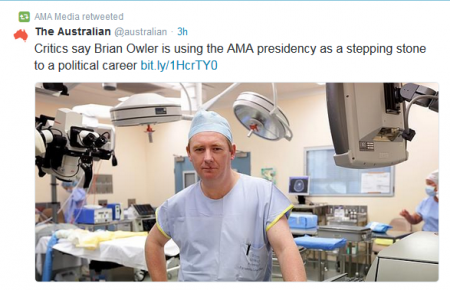 The AMA is also at odds with the Federal Government over its announcement it had reached in-principle agreement with pharamacists on the Sixth Community Pharmacy Agreement, valued at $18.9 billion investment over the next five years.

The Consumers Health Forum of Australia has however welcomed the agreement, saying Minister Ley is proposing changes that will bring significant benefits for consumers.  It said these include:

However the CHF cautioned the government against re-introducing the propsoed rise of up to $5 in the patient co-payment for a prescription and accompanying tighter safety net measures.

“Such a move would be contradictory and pose a cost barrier for many patients, particularly the chronically ill,” it said.

See the response to the agreement from the Pharmacy Guild and more detail from Minister Ley’s press conference (including comments on the WA medical school proposal).

Fairfax media today reported that the Federal Government has also axed the Healthy Kids Check for four-year-olds, to save $144 million. It quotes the Minister as saying:

“The fact that only half of all four-year-olds have used the programme after seven long years underperforming shows this was more about glossy Labor election commitments than filling a service gap in health system.”

Fairfax said that while some health policy experts have questioned the value of the Healthy Kids Check program, a study published in the Medical Journal of Australia in 2014 found it was detecting problems in about one in five children. The most common problems identified related to speech and language, followed by toilet habits, hearing, vision and behavioural issues.

In a joint statement with Speech Pathology Australia, the Royal Australian College of General Practitioners (RACGP) expressed disappointment in the decision, saying:

“Restricting this service to state based programs will limit access and further fragment care by forcing families to seek care outside their regular general practice.

“It is disappointing the Federal Government made this decision without discussion or consultation with the profession because we could have provided advice on how to improve the Healthy Kids Check.”

PrevPrevious# How the world of health and medical conferences is changing #
NextThe verdict is in: Time to better protect Australian children from toxic lead exposureNext