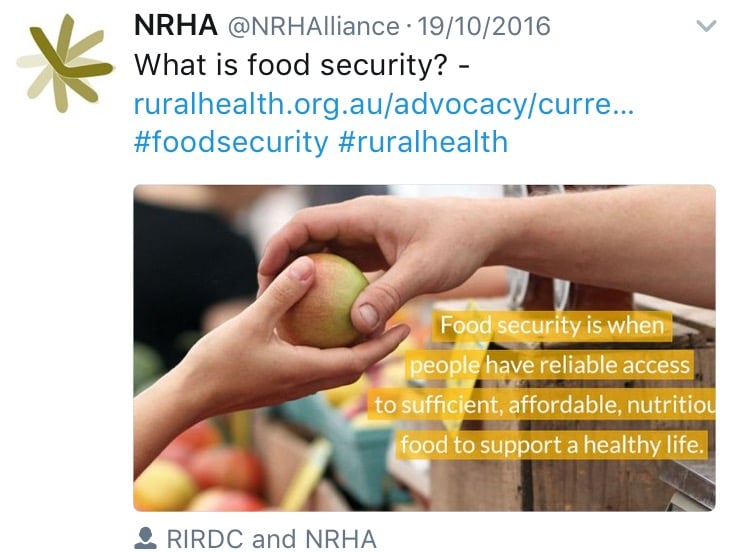 Not having enough to eat can really wreck your life

Last month saw the release of a comprehensive report on the extent to which those living in rural and remote Australia have access to affordable, healthy and nutritious food – their food security.

Like many reports, this one found that there has been a lack of research, data collection and planning in this area. We don’t know what we don’t know, and we lack a plan to fix it, particularly for remote communities.

The report, written by the National Rural Health Alliance (NRHA) for the Rural Industries Research and Development Corporation, comes up with a number of future options – for the development of a National Food Security Strategy, an agenda for research and data collection, policy initiatives and potential innovations –  that make interesting reading.

In the post below, Fiona Brooke, who led the report’s compilation as Senior Policy Advisor for the NRHA, outlines some of the background to the findings, and the reasons why this work is so important.

In a new report, Food Security and Health in Rural and Remote Australia, written for the Rural Industries Research and Development Corporation, the National Rural Health Alliance (NRHA) has explored how ongoing access to an affordable, healthy diet affects health and wellbeing across the whole of life.

In a wealthy country such as Australia, many may be surprised to know that an estimated 5-8 percent of the population do not have ongoing access to an affordable, healthy. What most people also may not realise is the impact on health and wellbeing that this can cause.

The Alliance has brought together Australian and international evidence with information on the current Australian policy settings. Three of the key facts in the report are that:

Ruben and Walker were among the first researchers to discuss the problem of malnutrition in Aboriginal children in the Top End of the Northern Territory, by examining children aged less than two years admitted to hospital with diarrhoea. They came to the conclusion that in 1995 approximately 20 per cent of Aboriginal children in the Northern Territory suffered from malnutrition.

In a 2015 Australian study, White et al found that the rates of malnutrition observed in a national sample of hospitalised children were considerably higher than the expected population rates, based on previous studies. Two key findings from their “snapshot” of a day’s admissions in a range of different hospital settings were:

The rate of malnutrition in rural and remote Australia is no doubt compounded by the cost of food – particularly in remote communities. A recent study in a remote Aboriginal community found the cost of food was from 60-68% higher than the same food in Darwin or Adelaide.

In compiling the report, the gaps in Australian research on food insecurity required us to consider of international research on the long term health effects. One of the findings of the Report was that there is a need for a broader research focus on the social and health impacts of food insecurity, including longitudinal studies.

The impact of diet in the first years of life on the future schooling outcomes for children was the subject of a study from Bangladesh. Khanam et al found that poor nutrition in childhood resulted in poor health and affected all aspects of schooling including the age at which children commenced schooling, the regularity of attendance and their achievement at school.

A Chilean longitudinal study by Ivanovic et al examined the long term impact of severe undernutrition in the first year of life on high school graduates, finding that that the long term effects of early malnutrition may impact brain development, IQ and scholastic achievement.

A Guatemalan longitudinal study followed a large cohort of low socioeconomic children, commencing in 1969. Two groups were included in the study, with one group receiving substantial nutritional supplements and the second group receiving a drink containing micronutrients but little protein.

Being able to limit, or even reverse, the health impact of food insecurity means early interventions to support access to a healthy diet in infancy will be money well spent by governments. Giving children the best start in life gives those children the opportunity to grow, develop and contribute to their community and the broader society. This can only be to the benefit of all.