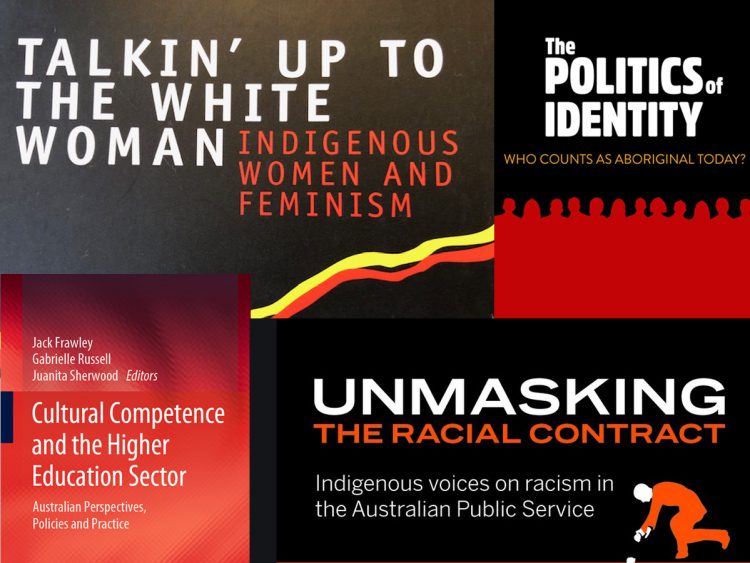 “Nothing about us, without us”: performative allyship and telling silences

Introduction by Croakey: Last Friday, we published an article, Why cultural competence is the wrong approach for white Australians. A few hours later we took the article offline, in response to comments from readers and because we had not followed our usual editorial processes in reviewing the article prior to publication.

Below, Professor Fredericks, Dr Debbie Bargallie, Senior Research Fellow with the Griffith Institute for Educational Research at Griffith University, and Professor Bronwyn Carlson, Head of the Department of Indigenous Studies at Macquarie University, highlight some of the key contributions made by Aboriginal and Torres Strait Islander scholars to the field of critical race theory, which were omitted from the article.

Twenty years after its release, Talkin Up to the White Woman by Distinguished Professor Aileen Moreton-Robinson is as vital as ever and continues to give Aboriginal people strength to speak back to discriminating and oppressive white discourses.

On 26 June 2020 an article written by Julaine Allan and Katarzyna Olcon titled ‘Why cultural competence is the wrong approach for white Australians’ was published by Croakey. Our concerns are not with Croakey (for the article was taken down within hours of it being posted), but the article itself for the reasons we explore below.

The article focused on colonialism, history, and people’s quest to learn how they can help change the impact of racism in broader society. The authors position cultural competency training as the main method through which racism is addressed and used to improve non-Indigenous interactions with Aboriginal and Torres Strait Islander people.

Within the article, Allan and Olcon cite three systematic literature reviews of cultural competency conducted in the USA, UK, and Australia, citing them as evidence that cultural competency training has had no impact on patient health outcomes or service delivery. Moreover, they argue that a focus on “culture” within such training programs equally does little to change attitudes.

While the article presented some relevant information and evidence, what is unsettling for us, as three Indigenous scholars, is that despite offering a summary of what has previously been stated, key ideas and seminal works in an Australian context and by Indigenous scholars were omitted. The works they overlooked spread across the fields of social work, nursing, medicine, psychology, education, science, law, history and a range of others.

This is what Gomeroi scholar Alison Whittaker describes as a “telling silence” that speaks to white authorship and attitudes towards Aboriginal and Torres Strait Islander lives.

As the global Black Lives Matter movement highlights the multiple ways racism is embedded in the everyday world, there has been an increase in public commentary on promoting scholarly works that address race and racism. This has been coupled with calls for allies to educate themselves. While a worthy endeavour, it has often resulted in white scholarship and authors being promoted in lieu of Indigenous writers, scholars, artists, scientists and thinkers in general.

This was brought to our attention in a tweet by Wiradjuri scholar Dr Sandy O’Sullivan who noted how two white women were being heavily promoted for their work on race and racism. As means to counter this, O’Sullivan calls for allies to look to the work of Indigenous and Black writers, generously providing a significant list of Indigenous publications under the hashtag #BlackXplaining101. 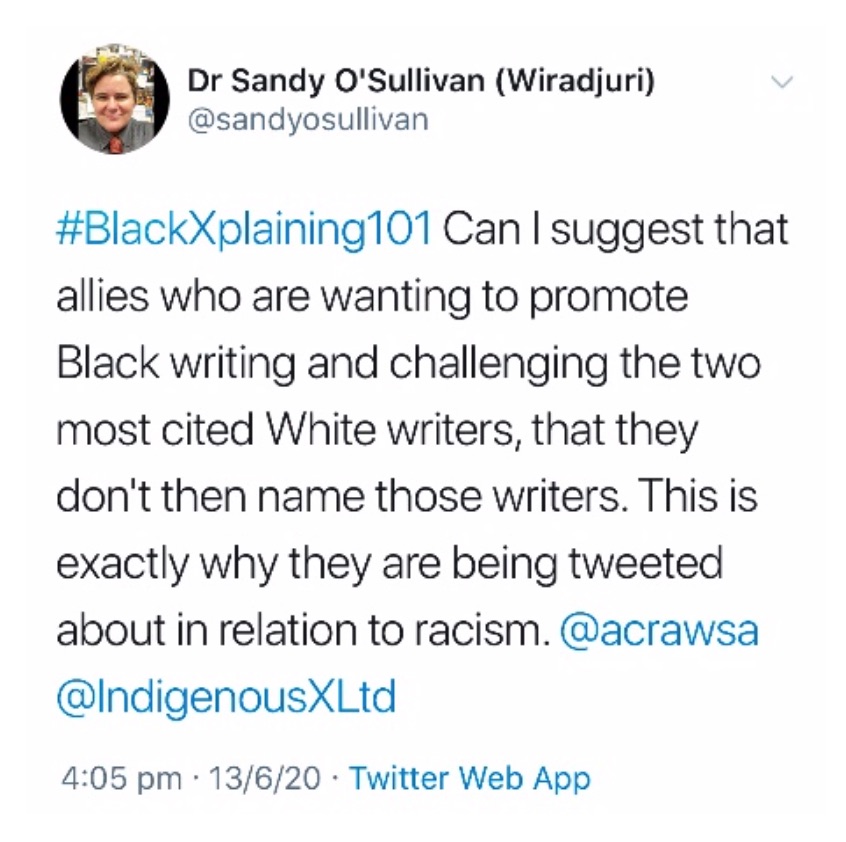 Despite the authors not naming or positioning themselves in relation to whiteness, Allan and Olcon’s work centres on and reflects such discourse. By neglecting to include the key ideas, works, efforts and agency of Indigenous scholars in relation to their contributions to cultural competency, Indigenous Studies and critical race studies, Allan and Olcon maintain the very whiteness they strive to contest.

As such, they sail along the pathway of what is sometimes referred to as “performative allyship”. Performative allyship, according to Holiday Phillips, “usually involves the ‘ally’ receiving some kind of reward — on social media, it’s that virtual pat on the back for being a ‘good person’ or ‘on the right side’”. The two authors trending on Twitter, as observed O’Sullivan, can be seen as the beneficiaries of such performative allyship as other allies tagged their work on race and racism.

We acknowledge that while Allan and Olcon may have had good intentions, they nonetheless neglected to delve deep into self-reflection and consider how whiteness and race locates itself within their own work and understandings. There are always opportunities to develop deeper realisations of how we construct, racialise and speak to and about race and racism.

We argue that competency training must expose power, whiteness and concepts of an Indigenous “other”. Participants need deeper realisations of how their understandings of such an “other” are constructed, formed and enacted within specifically “white” social settings. By revealing whiteness as a racial construct, participants can use such revelations to transform the inequitable power differentials in their work with Indigenous peoples and organisations. This is particularly applicable to health and human service provision as well as service provision in other settings.

Through our own work, we have become aware of the foundation left by Indigenous scholars such as Anning; Asmar; Bargallie; Bessarab; Bennett et al; Bond; Butler and Young; Carlson; Bodkin-Andrews and Carlson; Fredericks and Bargallie; Fredericks and Thompson; Fredericks et al; Gilbert; Kinnane, Wilks, Wilson, Hughes and Thomas; Moreton-Robinson; Sherwood and Edwards; Sherwood and Mohamed; Walter and numerous others in the field of critical race theory. This critical race scholarship spans some 40 years. It is through these works that non-Indigenous people can develop greater understandings of themselves in relation to race, racism, bias, and discrimination, drawing on their insights as means to facilitate individual and organisational change.

Though claiming that three systematic literature reviews of cultural competency training revealed no evidence of such training as having impact on patient health outcomes or service delivery, Allan and Olcon dismiss any other learnings that are potentially gained from such training. Furthermore, it positions Indigenous people as mere “clients” or “patients”, failing to recognise that we may also be colleagues, managers, cleaners and so forth. Such oversight fails to recognise the power embedded in the structures and systems that maintains the institutional bias, racism, denial, violence and discrimination that privileges white people.

We argue that cultural competency training must enable participants to interrogate their own cultural positionings and in doing so understand the pervasive nature of race and racism in Australian society and institutions. Bargallie’s work demonstrates how Aboriginal and Torres Strait Islander peoples experience racism through systems and structures in their everyday work with colleagues in large organisations.

Her work explains that racism, as both a word and topic, is primarily absent in conversations amongst non-Indigenous colleagues. This is despite racism being embedded within everyday dialogue, writings, work practices, and in ways that are rarely seen or acknowledged as “racist”. This is partly due to the lack of public racial literacy and the denial of racism in Australian society.

Moreton-Robinson’s powerful seminal work demonstrates how whiteness dominates from a position of privilege which is essentially invisible and unchallenged. Some of her recent work builds on this, showcasing how whiteness manifests in multiple settings.

Moreton-Robinson argues that as individual and structural racism work together, they must be examined in relation each other and exposed not only through Indigenous narratives and lived experiences, but critical self-reflection. This is similarly asserted in Bargallie’s work. We argue that cultural competency, cultural awareness, cultural safety, or anti-racism training must do the same.

Similar to O’Sullivan, Allan and Olcon provide a reading list where additional information may be sought and allies educate themselves. The reading list, however, is also telling as it begins with one of the very white women that O’Sullivan refers to as trending in their tweet.

Allan and Olcon’s recommendations are absent of any scholarship by Indigenous experts in any field and particularly of Aboriginal and Torres Strait Islander social workers of which there are many (for example, Bennett et al; Bessarab; Walter).

Drawing on the words of Whittaker, while perhaps trying to address a significant issue in Australia, Allan and Olcon’s article “lacks both Indigenous self-determination and settler self-reflection”. It stirs within us the need to “talk up to the white woman” and name and call out the issues.

Bodkin-Andrews, Gawaian and Bronwyn Carlson. “The legacy of racism and Indigenous Australian identity within education”. Race, Ethnicity and Education 19.4 (2014): 748-807.

Fredericks, Bronwyn. “The Need to Extend Beyond the Knowledge Gained in Cross-Cultural Awareness Training”. The Australian Journal of Indigenous Education 37.S (2008): 81-89.

Fredericks, Bronwyn and Nereda White. “Using bridges made by others as scaffolding and establishing footings for those that follow: Indigenous women in the Academy”. Australian Journal of Education 62.3 (2018): 243–255.

Fredericks, Bronwyn, Nereda White, Sandra Phillips, Tracey Bunda, Marlene Longbottom and Debbie Bargallie. “Being Ourselves, Naming Ourselves, Writing Ourselves: Indigenous Australian Women Disrupting What It IS to BE Academic Within the Academy”, in Louise, M. Thomas and Anne B. Reinertsen, eds, Academic Writing And Identity Constructions. Performativity, Space and Territory in Academic Workplaces, Switzerland, Palgrave McMillan, 2019: 75-96.

Kinnane, Stephen, Judith Wilks, Katie Wilson, Terri Hughes and Sue Thomas. Can’t Be What You Can’t See: The Transition of Aboriginal and Torres Strait Islander Students into Higher Education. Final report to the Australian Government Office for Learning and Teaching. Canberra: Office of Learning and Teaching, 2014.

Phillips, H. “Performative Allyship is deadly (Here’s what to do instead)”, 2020, https://forge.medium.com/performative-allyship-is-deadly-c900645d9f1f

Whittaker, Alison. “Not my problem: On the colonial fantasy”. Sydney Review of Books, 2019, https://sydneyreviewofbooks.com/review/maddison-colonial-fantasy/