If you’re looking for summer reading, there are plenty of suggestions below, from the worlds of fiction and non-fiction.

Croakey contributors were asked: What books have you read this year that you would recommend to this blog’s readers?

The Body Economic by David Stuckler and Sanjay Basu.

It is about the impact of the global financial crisis on health, and demonstrates that it is not the financial crisis per se that matters for peoples’ health and wellbeing but how governments respond (stimulus or austerity).

It’s a parody on where the internet, specifically social media,  might be going, and should be read tongue in cheek, but it’s a timely and well written parody, and, as one reviewer said, humour can sneak in under the door to make a point while earnestness is still hammering from outside.

It’s the story of the conflict between Selman Waxman and his PhD student Albert Schatz over who really discovered that streptomycin was a potent anti-TB antibiotic.

It’s the side of science we often don’t want to see. About class and power. Interesting read.

***
Associate Professor Peter Sainsbury, University of Sydney
1) The Rosie Project by Graeme Simsion  – very amusing tale about a frustrating but lovable university professor with Asperger’s syndrome and his search for a life partner, told from the professor’s viewpoint. Although you laugh at him and at the things he does, you can also see the logic of his actions. Will certainly be made into a film.

2) Love in a Cold Climate – a classic by Nancy Mitford. Very acerbic but very funny story of life among the aristocracy in England in the thirties. Beautifully written.

3) Cannery Row by John Steinbeck – another classic. A loving tribute to picaresque and salt of the earth characters in small town America. Again beautifully written.

Professor Tarun Weeramanthri, Chief Health Officer, WA Department of Health
The Immortal life of Henrietta Lacks, by Rebecca Skloot.  Science, research, race, ethics in one compelling and true story, of which I was previously unaware. First published in 2010, I discovered it thanks to my old Darwin book club friends.

Alison Verhoeven, AHHA
The AHHA’s Book of the Year is Making Medicare – The Politics of Universal Health Care in Australia, co-authored by the Director of AHHA’s Deeble Institute, Anne-Marie Boxall and James Gillespie.

It’s a compelling account of Australia’s long, tortuous and unconventional path towards universal health care and of the reforms that brought it into being. But it is not just about the past. It also offers a timely overview of further reforms needed to address the challenges facing our health care system: new technologies, the ageing population and the rising tide of chronic disease.

When we’re not working, we’ve also enjoyed Joshua Foer’s Moonwalking with Einstein: The Art and Science of Remembering Everything, and Hannah Kent’s Burial Rites, which although sounds like it might be health-related, is actually a terrific novel set in 19th century Iceland – just the right book to read while enjoying an Australian summer.

***
Public health nutritionist Dr Rosemary Stanton
Climate change on for Young and Old (a series of essays on the effects of climate change, including some excellent and thought provoking opinions from schoolkids. Edited by Helen Sykes).

Oil and Honey: The education of an unlikely activist, by Bill McKibben. It details what we are up against as well as how and why we need a multi-pronged effort at local through global levels if we are to have any chance of preventing dangerous climate change.

Gemma Carey, CEIPS
Health promotion and the policy process, edited by Carole Clavier and Evelyne de Leeuw. Evidence is not enough and public health professionals need to get a better understanding of the policy process so they can participate effectively in it. This book is a great reader for getting your head into the policy space.

It’s about how to make your ideas sticky, how to sell you message, how to craft stories that resonate and have impact. This is a must read for anyone trying to communicate public health messages.

It also introduces us to the villain that lurks within many communications attempts – Curse of Knowledge. Thankfully, it provides a blueprint/framework for defeating Curse too. 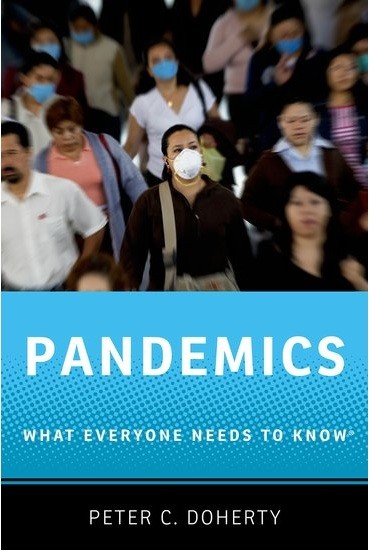 You’ve got to hand it to Peter Doherty.  Not content to share a Nobel Prize for figuring out how the immune system identifies invading viruses, he runs research programs at both St. Jude Children’s Research Hospital in Memphis, Tennessee, and the University of Melbourne. Of course he speaks hither and yon. Oh, and the former veterinarian – the only vet to win a Nobel for Medicine or Physiology — has three books under his belt and a new one in the shops.

Book One: When The Beginner’s Guide to Winning the Nobel Prize came out in 2005 I was dubious. Scientists can be notoriously bad writers, too often leaving readers behind in a dust of incomprehensible detail. Think Stephen Hawking’s A Brief History of Time. I was wrong.  Doherty’s book’s a chatty series of essays on everything from his Nobel-snaring work with Rolf Zinkernagel and science writing to the value of avoiding prestigious administrative jobs and living long enough to get the call from Stockholm.

OK, I missed Doherty’s 2008 effort, A Light History of Hot Air. But I loved last year’s Sentinel Chickens: What birds tell us about our health & the world.  When a quarantine expert first mentioned sentinel chickens to me I instantly imagined flocks of claymation chooks wearing little flak jackets and sporting binoculars as they scanned the sky for invaders. Since then I’ve had a soft spot for the disease-spotting birds, and was tickled pink to learn Doherty is a fellow fan. The book’s an entertaining and informative read about the services and insights we obtain from our feathered friends.

Now there’s PANDEMICS: What everyone needs to know. True, unlike sentinel chickens, I don’t have a soft spot for microbes. Who does? But as the possessor of a mediocre immune system I have a healthy respect for them.  So I was fascinated by Doherty’s take on the pathogens du jour: assorted influenza A strains, weaponised anthrax, Ebola, multi-drug resistant TB, HIV/AID … you know, the usual bad actors, plus a cast of lesser known villains.

While many Croakey readers will be au fait the good, the bad and the ugly of bug’dom, I’m confident that they’ll also be charmed and informed. After all, this is a broad topic. As Doherty notes, he had to pick the brains of his clinical and public health colleagues to pull together Pandemics, despite spending years with infectious diseases – in the laboratory of course.

Pandemics begins with a great introductory discussion that pulls together the main threads of the book.  Doherty does this by telling tales about the three influenza A pandemics of the 20th Century: 1918 Spanish flu (10-40 million deaths), 1957 Asian flu (1 million deaths) and the 1968 Hong Kong flu (0.5 million deaths).  He tosses in some gossipy stories about advances in medical research and international collaboration, the nasty link between disease and warfare and the role of literature and human evolution. The book’s off to a ripping start.

The guts of the book – and what sets Pandemics apart from most what-you-need-to-know books is the fact that Doherty puts the pathogens in their biological and social context. For instance, he provides a clear discussion of the immunological nuts-&-bolts behind Pandemics and their siblings: epidemics and outbreaks.

Doherty then deals with the human-microbe, well, interface. That is, how our species is unsettling the wild world with nasty repercussions for all. He explores how our cultures, technologies and soaring populations are making us sick, then counters with a discussion of ways we — individually and collectively — can take precautions to protect ourselves from serious outbreaks while not getting our knickers in a knot over unpleasant, but comparatively mild infections.

But Doherty goes further. He tackles sensitive topics head-on. I have huge time for any scientist who takes positions — evidence-based of course – on social and political issues. For instance, Doherty argues for population control by empowering women, while chiding penny-pinching, poll-driven politicians for not adequately supporting medical research and public health measures. He gives economic rationalists the flick, reminding the relaxed-and-comfortable amongst us that infectious diseases are “no respecters, of wealth, power or personal merit”.

And anyone who refuses to vaccinate their children?  Well, as the Frank Fenner said in one of his last interviews: “If you’re worried about over-population don’t vaccinate your kids”. No doubt Peter Doherty would agree.

All up, for a touch over twenty dollars Pandemics is not only a good summer read, it’s an excellent reference book for all seasons. I’m sending a copy to my tech-geek nephew. He knows lots about computer viruses and very, very little about the human variety. Very little.

This book looks at the disparity between actual and perceived risk in today’s society.  The author makes the point that we worry much more than we used to and argues that the politics of fear is having a decidedly adverse impact on our lives.

I like the book because it conveys far more articulately than I ever could the way in which our fears are completely out of touch with reality.  It is critical of the use of fear as a means of influencing societal attitudes, and puts risk into perspective in an interesting, well-informed way.  Definitely worth a read. 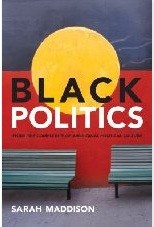 Black Politics, by Sarah Maddison (though in truth, I’m still part way through!).

Maddison describes the complexity and variety of thought in contemporary Aboriginal politics, through interviews with a range of interviews of national and local Aboriginal and Torres Strait Islander people who have been active in this space.

It makes particularly important reading right now, with Warren Mundine and Noel Pearson’s views becoming the officially accepted Aboriginal views. This book will give a much deeper and more nuanced picture, than that – and indeed is quite critical of the views of Pearson.

I recommend this book as it was a real eye opener for me – we don’t get introduced to this way of thinking at Medical School. It’s possible you all know this anyway.

So, by way of balance, I shall advise you to read a monograph that describes the work of GPs in a way often not recognised by those outside the profession – The Mystery of General Practice, by Iona Heath.

PrevPreviousIntegrating health, social and environmental thinking and practice: a wrap of #EcoHealth13 discussions
NextProfiling the journal articles and reports that packed the most useful punch in 2013Next