Now this DOES call for outrage. (And please support #JustJustice)

“Our young people do not belong in prison.”

This statement by Aboriginal and Torres Strait Islander Social Justice Commissioner Mick Gooda opens a new report, which makes a strong call for action to end the over-representation of Indigenous youth in the criminal justice system.

The report should inspire widespread outrage, according to researcher Darren Parker, a Ngunawal man and Phd Candidate at the Melbourne Law School. (The report’s recommendations are published in full at the bottom of this post).

Meanwhile, the #JustJustice campaign – which seeks to crowdfund a long-running investigation into ways to stop the over-incarceration of Aboriginal and Torres Strait Islander peoples – ends at 7pm on June 7. We have just three days to raise more than $11,000. Please support it if you can.

Be outraged at the Indigenous youth imprisonment rate! 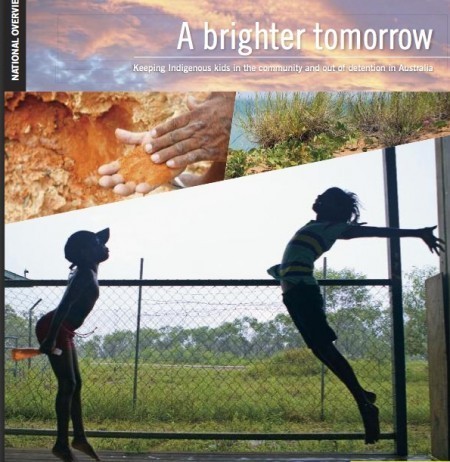 Australia is currently immersed in the ‘outrage’ of a ‘war dance’ and an imaginary ‘spear’ held by an Aboriginal footballer.

Meanwhile, back in reality, an Amnesty International report on the over-representation of Indigenous youth in the criminal justice system was published that is more rightly a source of outrage.

As Aboriginal and Torres Strait Islander Social Justice Commissioner, Mick Gooda, states: “This is a national emergency. This must change, urgently.”

The urgency for drastic action to reverse the over-representation of Indigenous young people in juvenile detention centres is immediate. If Australia neglects this, it will face losing another generation of Indigenous peoples to failed government policies, according to the Amnesty International report.

The report, Brighter Tomorrow: Keeping Kids in the Community and out of Detention in Australia, states that rates of Indigenous youth imprisonment are the highest they have been since the Royal Commission into Aboriginal deaths in custody handed down its report in 1991.

This represents 20+ years of failed policies, if not, sadly, even longer. The fact that the imprisonment rates have increased to such levels since the Royal Commission is all the more damning of the current situation in Australia.

The report states that between 2013-14, Aboriginal and Torres Strait Islander children were 26 times more likely to be imprisoned than non-Indigenous children.  26 times! A truly shocking statistic when you consider that Indigenous youth make up approximately 5% of the population of 10-17yr olds, but make up over half (59%) of youth in detention.

Many of the reasons Indigenous youth are incarcerated are preventable. Be outraged at that.

Further, the comparative effects of these rates are all the more alarming when viewed within the continuum of funding uncertainty, shortfalls and government cuts to specialised Indigenous legal services. This means that many Indigenous young people do not always get the legal assistance they require or deserve.

In the foreword of the report, the social justice commissioner tacitly recognises that even where there is underfunding, it is money being poorly directed. Additionally, current approaches to Indigenous youth encountering the criminal justice system are severely lacking.

He says: “We need an approach that starts to address the underlying causes of crime and starts to divert resources away from imprisonment and into local communities. This is a justice reinvestment approach that suggests that both early intervention and community responses are necessary to achieving long-term change.”

‘Justice reinvestment’ and ‘long-term’ approaches are certainly at the core of the report’s 16 recommendations. All of which are practical and straightforward in implementation, even in recognising the Commonwealth/State jurisdictional sphere. The implementation of the report’s recommendations would radically alter the current Indigenous youth criminal justice trajectory away from human rights catastrophe.

Critically, the importance of the recommendation should not be lost. As, most recent data indicates (Table S76b), Indigenous children make up more than 60% of all children under 12 years of age detained in Australia. That is, more than one in two, 10-11 year olds in detention are Indigenous! Be outraged at that.

Be outraged that Western Australia, Queensland and the Northern Territory have, respectively, the highest rate of over-representation of Indigenous youth in detention; the fastest growing rate of Indigenous youth detention; and the highest proportion of youth in detention who are Indigenous. That two of them were named again by the UN Committee on the Rights of the Child for substantial failures in complying with minimum international standards is perhaps more enraging.

Rather than moving in ways that work toward justice reinvestment programs as outlined in the report, both the Western Australian and Queensland governments have recently implemented laws that are more punitive in nature.

In Queensland, the law allows the courts to treat 17-year-olds like adults under the Criminal Code. Last year the Newman government enacted another law requiring that kids who turn 17 in detention with more than six months left on their sentence be transferred to an adult prison.

In Western Australia, a recent decision to toughen “three-strike” mandatory sentencing laws to allow all three strikes to be awarded concurrently could see children jailed for three months on their first court appearance.

The report also recommends including justice targets within the national ‘Closing the Gap’ strategy. Recommending that a dual target to close the gap between Indigenous and non-Indigenous Australians, in incarceration rates and rates of experienced violence. Perhaps, be outraged that there have never been any justice targets implemented at the COAG level or in the Closing the Gap strategy.

Further, the report recommends recognising foetal alcohol spectrum disorders (FASD) as a disability before the courts, and making a national commitment to a justice reinvestment approach to find community-based solutions to youth crime. Additionally, the report recommends that urgently finalising a diagnostic tool for FASD is critical in this regard. Maybe, be outraged that there isn’t even an official diagnostic tool for a medical condition that is connected with high rates of involvement in the justice system.

Or perchance, be outraged that the report recommends that Australia and its states/territories standardise and integrate all data collection. Because even now, nearly 25 years after the Royal Commission into Aboriginal Deaths in Custody, pathetically Australia still cannot standardise or integrate its own data collection!

It is is abhorrent that there are approximately 450 Indigenous children in detention across Australia every night.  Even more abhorrent is that we do very little to combat this when indeed we could. Be outraged at that! 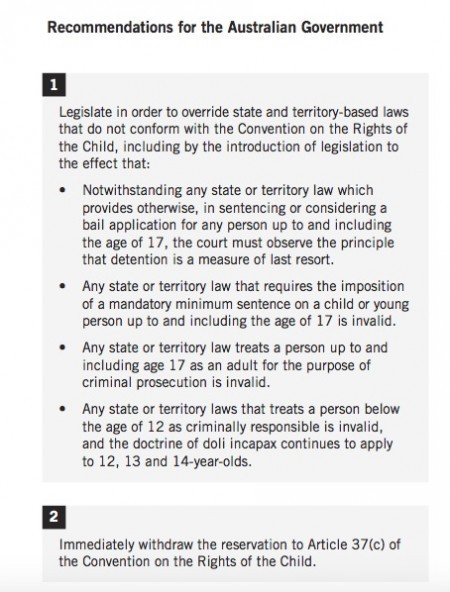 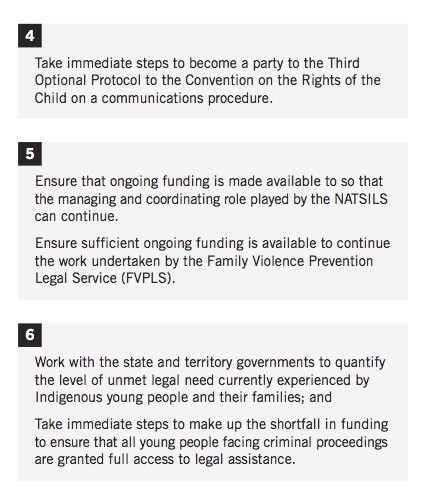 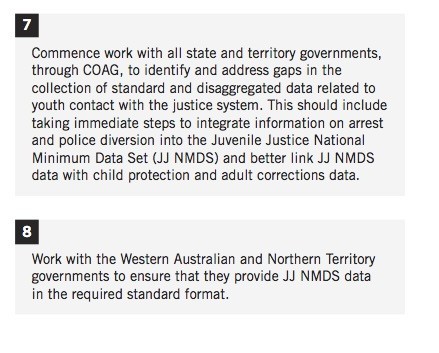 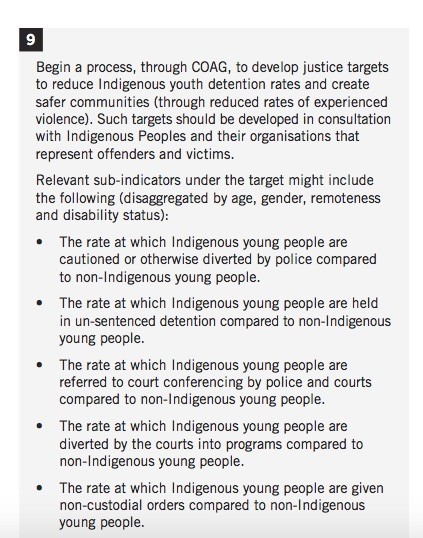 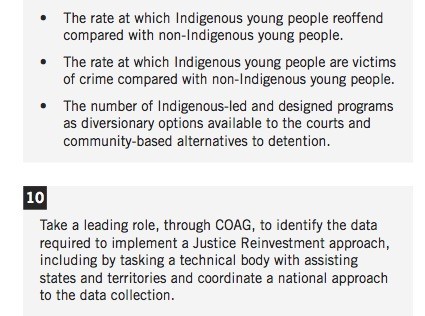 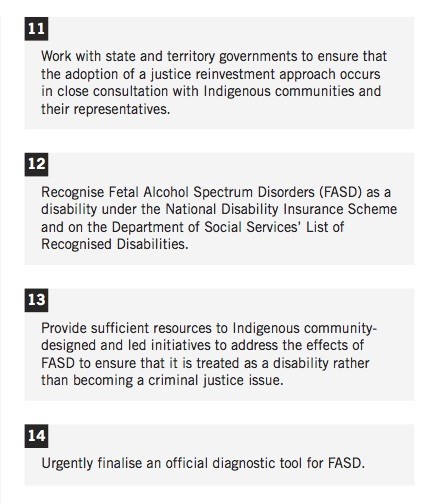 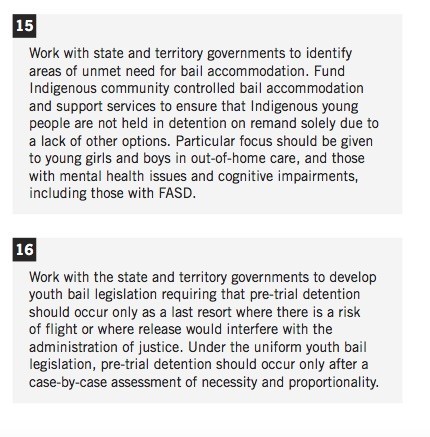