The recent NSW election has put the spotlight on the State Government’s prioritising of vested interests ahead of public health, according to Jude Page, NSW branch president of the PHAA.

Her article also suggests that a narrow focus on health care in an election health context distracts from bigger picture public health concerns – like the the NorthConnex Tunnel and WestConnex projects.

In the lead up to the NSW election, public health was put in the spotlight with a debate between NSW Health Minister Jillian Skinner, Labor’s new opposition spokesman on health Walt Secord, and Greens’ spokesman John Kaye (pictured in photo below). 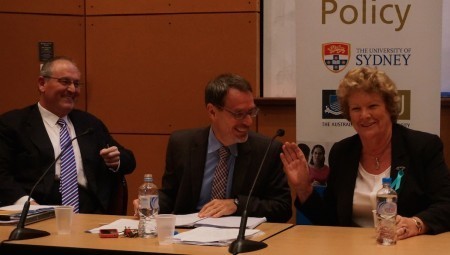 With substantial challenges facing public health some may have expected a fierce debate. Maybe it was the warm glow of fairness that is the core of Public Health; there was more unity than dissent.

Minimising the harm from Abbott’s cuts to health and education is a challenge for all parties. All agreed on striving for an effective health system with a focus on prevention and early intervention. Unity, no biffo?

After 17 years in the health portfolio, we have a Liberal Health Minister who understands the cost and social benefits of preventing illness, saving between $5-40 for every dollar of targeted investment.

Public Health Association of Australia chief executive Michael Moore said “Minister Skinner has considerable strength in an area that is usually seen as a natural area for those in left of politics to benefit from. I think this comparatively moderate Liberal government, with the sort of health leadership that Jillian Skinner has given is really narrowing the difference.”

Pollution matters
It was all going quite well until someone asked about pollution.

While health is holding the tide, providing world-class health care, other Ministries of the same Government are paving the way for new health jobs though designing polluting motorways and granting coal mine licenses. Not to mention risking food security and polluting water aqueducts though coal seam gas exploration.

So where did the candidates stand on balancing need, the health of local communities and profit?

The major parties lacked credibility here, leaving these issues to other Ministers who had little understanding or interest in the health impacts on people.

John Kaye won the crowd with his sensible declaration “if governments can’t build infrastructure without damaging the health of local communities, they shouldn’t build it. There are safer alternatives”.

If governments choose to override existing environmental health protections, what role should the Health Minister play?

The NSW AMA suggests that the Chief Health Officer make the call on such decisions.

Smart thinking and leadership is needed to provide liveable cities. Transurban, the builder of many of Sydney’s toll roads recently that Sydney will soon look like Los Angeles, with polluted congested roads and people should pay per kilometre to use toll roads.

The Public Health Association agrees. Sydney has suffered from a lack of sustainable infrastructure planning and a reliance on cars is making Sydney more polluted. Building roads increases road use and 80 per cent of air pollution is from cars and trucks.

It is clear that the public and decision makers know little about the effects of pollution. We’re used to pollution, we drive cars. It’s around us, yet no one wants to live near a polluted road – for good reason.

The World Health Organisation announced that diesel exhausts, from trucks, utes, and other diesel engines were reclassified three years ago to being substances that have definite links to cancer.

These very fine particles also called PM2.5 are small enough to get past our mouths, and into the deepest part of our lungs, where they can trigger asthma attacks, bronchitis, emphysema, heart disease and now we’ve learned cancer.

Based on scientific evidence, the WHO says diesel emissions belong in the same potentially deadly category as asbestos, arsenic and mustard gas and cause lung cancer and increase the risk of bladder cancer.

From this research, Bin Jalaludin suggests in the Medical Journal of Australia that outdoor air pollution is an important and modifiable risk factor and should be viewed in the same manner as the more traditional modifiable risk factors for cardiovascular disease such as cigarette smoking and hypertension.

We’ve been down the same road with asbestos, lead and cigarettes. Governments protected industry when there was clear evidence about the harms to humans.

Sacrificing communities
Aware of the health issues, the Liberal Government approved the NorthConnex Tunnel project, which will take cars and trucks off the busy Pennant Hills Road in northern Sydney and dump all 9km of their emissions out of smoke stacks at each end onto local communities.

Did it make local people aware of potential risks?  It said ‘it will improve air quality along Pennant Hills Road’.

The sacrificial communities that will breathe the concentrated pollution are just collateral damage. In Liberal Heartland the government could afford to lose a few thousand votes and still retain the electorates.

A larger road and tunnel project, WestConnex is planned for Inner Western Sydney, where there are far fewer Liberal voters. Toll roads are very expensive, they don’t make huge profits and homes and parks are sacrificed for cement and asphalt.

At an estimated $473 million a kilometre, what do locals think about WestConnex? The people in inner city seats of Newtown and Balmain felt both Labor and Liberal lack vision for sustainable alternatives with huge swings towards the Greens.

The highly experienced and influential Labor candidates in these seats may have arguably been more effective in reducing the health impacts of WestConnex.

In northern NSW, where Labor granted many of the coal seam gas licences and the Liberal-Nationals aren’t prepared to give up their coal royalties to protect prime agricultural farmland, the Greens also prevailed.

Importantly, if we know the harms of air pollution, how did NorthConnex pass an Environmental Impact Assessment (EIA), which must be conducted prior to approval?

What did the Environmental Protection Authority say about the NorthConnex project’s EIA? The modelling wasn’t up to scratch….for a multi billion dollar project.

What did NSW Health say about the EIA? The health impacts on local communities from pollution is unacceptable. NSW Health highlighted “an increased risk of hospitalization and mortality for residents who experience an increase in PM2.5 exposure”.

It politely directed the Department of Planning and Environment to a National Health and Medical Research Council observation from 2008 that stated: “In urban locations, it is often felt that portal emissions are not acceptable because of the localised effect of such a powerful point source of air pollutants.”

NSW Health recommended “that further consideration is given to ventilation designs, especially for scenarios with higher traffic congestion than that currently modelled, to better inform…the proposed tunnel design”.

The PHAA raised serious concerns about the health impacts of the NorthConnext project during the EIA process and with government Ministers.

The PHAA suggested that the health impacts of local communities should be considered in the project design and health impacts could be reduced by improving the design. Filtration could reduce 95% of particulate matter being released onto the community. This would cost an estimated 5 cents per car, from the estimated $4.60 toll users will pay.

What did the NSW Government tell us? They have raised the emission stacks by 5 meters, told us there are no health problems and the NorthConnex is ‘World Best standards’.

This response raises serious concerns about the Government appearing to protect the interests of business over the health of the community.

Should the public be able to judge what will happen to their taxpaying dollars? According to the NSW Government, apparently not.

The only independent review of the business case for the $14 billion plus WestConnex motorway, the biggest transport initiative in Australia, concluded “it was not able to form a view on whether the project is a worthwhile and prudent investment … for the NSW government”.

Furthermore, the NSW Government also agrees to compensate Transurban if new public transport impacts on toll road use, thus pushing up the cost of the extra public transport Sydney so badly needs.

A Productivity commission review of Victorian Infrastructure found that “Nationally poor project selection leads to highly inefficient outcomes. In such cases, investment in public infrastructure is a drain on the economy and tends to lower productivity and crowd out more efficient projects”. It estimated the investment in the East West Link project was worth about 50 cents for every dollar invested.

Importantly, the lack of co-ordinated, long-term planning of major transport projects across NSW is concerning. Disregarding the health of people affected by infrastructure and mining is unethical at best.

There has been little effort to properly evaluate whether rail networks that take drivers off the road and are arguably more effective than roads at a fraction of the cost – would be a superior option to big-ticket spending on roads.

While NSW is fortunate to have a world-class health system, there is increasing inequity, some people will benefit from being able to afford access to the health they need, healthy food and clean air.

Meanwhile, the people near the NorthConnex emission stacks and Campbelltown and Liverpool will live under a cloud of other peoples’ smog.

Without a government that puts the people before vested interests and that is able to deliver sustainable infrastructure, NSW will continue to slip down the world scale of liability, due to poor public transport and increasing pollution.

PrevPreviousPutting the spotlight on the first 1000 days, to improve children’s futures #LongRead
NextDiagnosing some important health gaps in the Intergenerational ReportNext