Belton, the Chairperson of Family Planning Welfare Association NT, suggests below that those NT politicians who voted to block even discussion of abortion law reform will be held to account at the forthcoming Territory election.

The Parliament voted 13 to 12 to NOT debate Independent Member for Goyder, Kezia Purick’s bill to reform the Medical Services Act.

The Medical Services Act is due for reform. Abortion was legalised in 1974 and the wording on termination of pregnancy has remained the same for 40 years.

Ms Purick’s bill would have enabled Territorians to ask their appropriately qualified GP for abortion tablets up to 9 weeks, visit only one doctor, put protection zones around clinics and hospitals to stop ‘righteous’ harassment of patients and staff and ensure that patients didn’t get the run around from some doctors who refuse to give information or refer women on to colleagues who can help them.

The reforms would have put the Northern Territory on par with progressive states like ACT, Tasmania and Victoria.

This is how politicians voted – according to their conscience – not their party affiliation. Those against could not bring themselves to debate women’s reproductive health, it was not a priority issue in Parliament.

Members of WHAT RU4 NT?, an expert advocacy group supporting law reform, predicted the close vote as they have lobbied these politicians for several years. 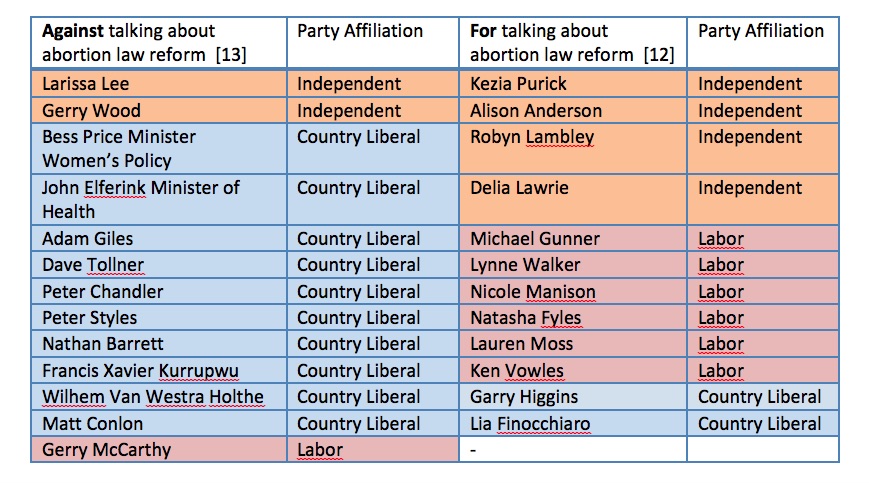 (If you have difficulty reading the table above, it can also be downloaded here.)

Ms Bess Price, Minister for Women’s Policy surely has to be the sorriest example. She has consistently not engaged in the issue, not declared an opinion in public, and did not appear to represent any Territorian women.

She took no opportunity to assure women that she was aware of the 1000 terminations that happen each year, or that 200 of those occur in Indigenous women and girls. She did not speak about the waiting lists at the two public hospital or the hundreds of women who travel interstate each year to get the reproductive health services they need.

The Minister of Health, Mr Elferink was also wilfully ignorant. He said: “I have sought advice from many people – and I talk about medical people particularly in the department (of Health) – and asked them to give me guidance…certain medical officers have counselled caution.”

He claims the legislation is rushed. Territorians wish him a quiet retirement from the fast pace of Territory politics.

The facts are that the issue of abortion law reform was presented to the CLP government in October 2013. Two CLP Ministers of Health have had it on their desks for over two years, probably enough time to know that the rest of Australia is way ahead of the Northern Territory.

An expert report, prepared for the government by an obstetrician gynaecologist, signalled in April 2014 that the Government needed to act. A second report was commissioned, but still Mr Elferink would not bring his own bill to reform the law. He had plenty of time and advice but did not act until Ms Purick in November 2015 introduced her bill to Parliament.

Is the personal political?

This bill has come about because for too long women in the Territory have been left waiting for fairness and equity.

This bill before Parliament was and is not about me. It is not about any member in this Chamber. It is about the women of the Territory and their rights and role in our community.

As I said previously, this bill is not about abortion, and in some ways it is not even about providing women alternate options for the termination of pregnancy.

This bill is about, in many ways, choice.… It makes no difference to me whether a woman continues her pregnancy or ends it. It is none of my business or that of anyone else in this Chamber.

What I care about is that the woman decides, and in making that decision she must have a full and proper range of services available to her. This is not the case at the moment.

Women are currently being forced to make a decision or not have things available to make an informed decision because the legislation does not allow it to occur.”

However, during the aborted abortion debates we did hear some personal perspectives.

Gerry Woods and Gerry McCarthy felt compelled to tell us about their personal moral position and how they manage family formation. Mercifully we did not have to hear how Nathan Barrett and his wife do or do not choose to have children.

The people of the Northern Territory are not concerned with the personal sexual lives of their Parliamentarians. They don’t care whether politicians have sex once a month, have ten kids or use rubber bands and lunch wrap to manage their fertility choices. That’s private stuff, guys, and we don’t want to know.

We respect your choices, so why not keep out of our lives? Let us decide how many kids we want and who we want to have them with by providing better reproductive health legislation?

Thirteen political representatives decided not to talk about it; they “pulled out”, so to speak. This is a clear case of political (coitus) interruptus.

The method of interruptus tends to leave a feeling of frustration and I think the issue of abortion law reform will not go away.

This year the Territory will elect a new Parliament, and the people will decide who best represents them. This bill on an important area of women’s health was not defeated because it was not debated.

• Associate Professor Suzanne Belton from Charles Darwin University has several decades of working in the health and education sectors as a clinician, teacher, and researcher in Australia and overseas. She advocates to improve sexual and reproductive health in Australia.

She is currently the Chairperson of Family Planning Welfare Association NT and past Australian representative for International Planned Parenthood Federation. She would like to acknowledge a nod to Ripper and Ryan, authors of The Role of the Withdrawal Method in the control of Abortion.