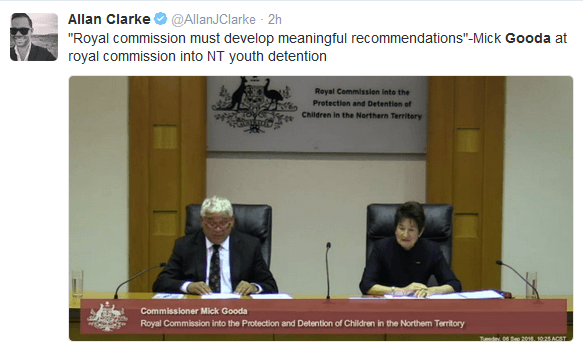 The first public sitting of the Royal Commission into the Protection and Detention of Children in the Northern Territory was held in Darwin today.

Commissioners Mick Gooda and Margaret White conducted the first Directions hearing which outlined the procedures and processes associated with conducting the Royal Commission.

Here’s a very useful recap of the day from O’Brien Solicitors who are representing Dylan Voller, whose treatment at the Don Dale juvenile detention centre helped spark the investigation.

Statements made by the Commissioners and Senior Counsel Assisting Peter Callaghan SC are available on the Royal Commission’s website. which also live streamed the hearing where there was “standing room only“, according to Guardian Australia. Hearing dates and locations will also be posted on the website.

The Commissioners have issued a Practice Guideline which outlines how the work of the Commission will be carried out to assist parties, witnesses and members of the public.

Organisations and individuals who want to share their stories with the Commision can contact it by phone on 1800 604 604, email childdetentionnt@royalcommission.gov.au, or in writing to PO Box 4215, Kingston ACT 2604.

The Royal Commission was ordered by Prime Minister Malcolm Turnbull the day after the ABC’s Four Corners published shocking footage of the treatment of young people being held at Don Dale, particularly of Dylan Voller, who was filmed in restraints and a spit hood.

At today’s hearing, Commissioner Gooda – the former Aboriginal and Torres Strait Islander Social Justice Commissioner – addressed concerns of bias that have been levelled after he tweeted, the day after the Four Corners program, that the NT Government should be sacked as a result of the revelations. He said:

“There has been some speculation that I will not bring an impartial mind to some aspects of the terms of reference. I wish to assure those people and the community that I will  look only at the evidence   and other information  given to the Commission and that nothing extraneous will affect the conclusions I reach with my co Commissioner.”

(The NT Government was swept aside at the 27 August poll, in what former Chief Minister Adam Giles conceded was a “thumping”. The Federal Government initially appointed former Northern Territory Chief Justice Brian Martin to head the Royal Commission, however he resigned within days following criticism of a lack of consultation with NT Indigenous groups and conflict of interest concerns about his past role.)

Gooda said the engagement of all parts of the Territory community, both Aboriginal and non-Aboriginal, will be critical to the success of the Royal Commission. He acknowledged that the formality of the process can be daunting to a lay person, and pledged to try to balance the need for “a culturally safe space with the rigour necessary” to address the terms of reference.

He also acknowledged that many Royal Commissions and other inquiries had already taken place that intersected with the focus of the Royal Commission, looking at institutional and out of home care, the various child protection systems in the States and Territories, the stolen generations, Aboriginal deaths in custody and child sexual abuse in Indigenous communities.

Gooda said he was aware of calls to expand the Royal Commission beyond the Northern Territory but it was bound by its terms of reference.

Ahead of the hearing, the Human Rights Law Centre, Amnesty International and the National Aboriginal and Torres Strait Islander Legal Services called on the Federal and Northern Territory Governments to take immediate action to protect young people currently in detention and not wait for the Royal Commission’s findings to ensure their safety.

In a statement, they said they have received reports that young people continue to be held in conditions amounting to solitary confinement in the High Security Unit of Don Dale.

They called on the NT Government to immediately prohibit the use of solitary confinement; introduce an independent inspector of youth detention to prevent abuse; and meaningfully engage with Aboriginal and Torres Strait Islander communities and organisations.

The groups are also calling on the Federal Government to ratify the Optional Protocol to the Convention against Torture, which Australia signed in 2009; and to properly fund Aboriginal organisations to engage with the Royal Commission. Human Rights Law Centre’s Director of Legal Advocacy, Ruth Barson, said:

“There is no reason for delaying ratification any further. The Commonwealth Government has an important leadership role to play. Ratification will ensure proper and independent mechanisms are in place to prevent the mistreatment of people in detention.”

“The Commonwealth Government must adequately fund Aboriginal organisations to engage with the Royal Commission. This will ensure affected Aboriginal people, organisations, communities and children are able to have their voices heard.”