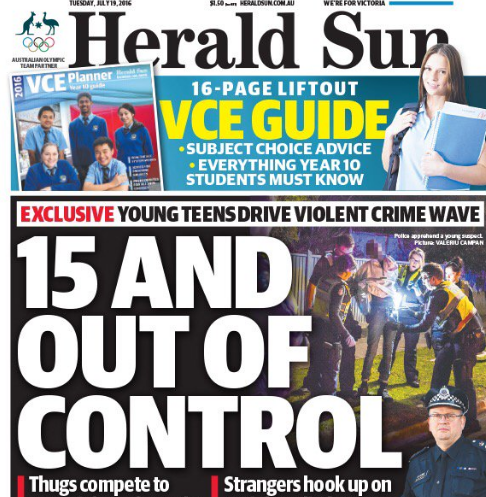 Meanwhile, Victoria has seen dramatic media headlines, talk of the need for vigilante-style groups, and demands for tougher responses to “lawless thugs” in the wake of a high profile number of violent break-ins and car-jackings by young people in Melbourne.

We have to recognise the kind of mistreatment that we watched with distress from the Northern Territory shows us the potential consequence of an overly simplistic, punitive approach to youth crime. It shows us what can happen when we demonise young offenders and ignore what causes them to offend.

The stories about the abuse of children in custody in the Northern Territory are devastating. The footage aired last Monday night showed children being tear-gassed without cause, a child stripped naked and held down by multiple adult men, and the same child left hooded and restrained for hours in the kind of contraptions we associate with Guantanamo Bay. These images have shocked us to the core, and rightly so.

Here in Victoria, we have had several months of media focus on young offenders involved in serious crime. This coverage and the incidents described have resulted in significant community alarm. We have heard reports of neighbourhood groups gathering to keep watch for “young thugs” and sports stores in parts of Melbourne selling out of baseball bats as concerned citizens prepared to take justice into their own hands. Meanwhile news headlines, talkback radio and letters pages have been filled with descriptions of the teenage “monsters” responsible for these crimes and calls for a tougher, harsher approach to young offenders.

We have to connect these two sets of stories. We have to recognise the kind of mistreatment that we watched with distress from the Northern Territory shows us the potential consequence of an overly simplistic, punitive approach to youth crime. It shows us what can happen when we demonise young offenders and ignore what causes them to offend.

A simplistic approach to youth crime focuses on how we feel in response to the crimes committed. This is understandable. Many of the incidents we have heard about in recent months are serious, violent incidents with long-term impact on the victims. That is important and we have to respond to the severity of the incidents and their impact. We also have to focus on what will actually stop this behaviour, rather than being driven exclusively by desire for retribution and punishment.

The evidence shows that locking kids up actually increases the likelihood they’ll go on to commit more serious offences, in turn entrenching them in a possible lifetime of crime.

A harsh, punitive approach to the young offenders we detain is also counterproductive. This week we saw evidence of the Northern Territory’s hard line approach to young offenders. The Northern Territory also has the highest youth offending rate in the country. A tough approach doesn’t stop kids from offending in the first place and it certainly doesn’t stop them reoffending after they leave custody.

This is because a tough approach doesn’t address the reasons young people are getting involved in crime in the first place. Two-thirds of children in Victorian youth justice centres are known to child protection, one third have mental health issues and we’re 12 times more likely to lock up Koori children than non-Koori children.

The bottom line is many of these children have themselves already been victims of the worst society has to throw at them. When they offend, we need to tackle the causes and support them to turn around, not compound these causes by exposing them to more abuse.

We know nine out of 10 Koori children in out-of-home care are traumatised by family violence. High figures also apply for non-Koori kids. Too many make their way into the criminal justice system. These children need the right services and supports to recover from the trauma they have lived through.

We need to invest more in diversionary programs. For those kids who do end up in custody, we need to use that opportunity to make sure they do not return.

We have to make sure time in custody is focused on rehabilitation. That principle underpins the approach to youth justice in this state and is enshrined in legislation. Correspondingly Victoria has always had, and still has, one of the lowest youth offending rates in the country.

Thankfully, Victoria’s youth custody system does not feature the brutalities we have seen in footage from the Northern Territory. Nonetheless, independent scrutiny of closed environments where children are held is always important.

Independent oversight bodies play a critical role in monitoring youth custody, calling out abuse when they see it, and recommending action to improve the system.

In Victoria, the Commission for Children and Young People provides that scrutiny. Established in 2013 as an independent body with a mandate that includes youth justice, the Commission’s capacity to monitor youth justice was strengthened earlier this year when the Victorian Government passed legislation to ensure we have visibility of all serious incidents in youth custody.

As independent Commissioners, we are proud to work in a state that values transparency in the way we treat our most vulnerable.

Using our mandate, we run a program of community visitors who speak to children and young people in youth custody and report on their treatment, conduct ongoing monitoring activities and hold exit interviews with children leaving custody. The Commission has recently initiated a systemic inquiry into the use of isolation, separation and lockdowns in youth justice centres in Victoria and we are also inquiring into an incident of restraint causing injury to a child.

The same transparency is needed for children across Australia. The Prime Minister’s quick action on a Royal Commission into the Northern Territory custody issues is to be applauded, but it will not be effective if the recommendations are not acted upon. Our counterpart in the Northern Territory reported publicly on youth justice abuses in September 2015, long before the footage aired on Monday night. In 1991 the Royal Commission into Aboriginal Deaths in Custody handed down recommendations many of which – 25 years later – have not been funded and implemented. Political will and community concern are vital in driving change.

This week we have seen Australians’ reaction to the brutality exposed in the media. This has resulted in the establishment of a royal commission. Community sentiment makes a difference.

We need to continue to express our disgust when we learn of abuse against children and young people and to speak up for those who do not have a voice. We also need to remember that a purely punitive, tough-on-crime response to youth offending can lead to unacceptable and shocking mistreatment of children, as well as being ineffective in making our community safer.

You can read more than 75 #JustJustice articles published to date here.

PrevPreviousOn submarines and health insurers
NextMinor parties and Independents in the Senate: a guideNext