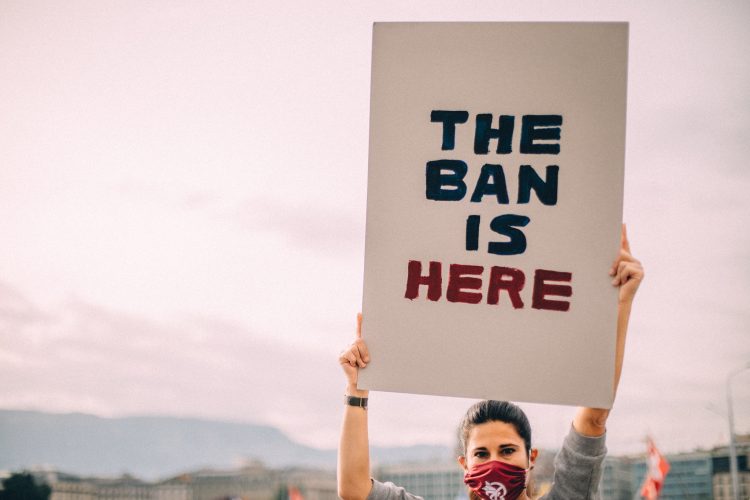 The Treaty on the Prohibition of Nuclear Weapons (TPNW) comes into force this Friday. Photo courtesy of the International Campaign to Abolish Nuclear Weapons.

As the Treaty on the Prohibition of Nuclear Weapons (TPNW) comes into force later this week, Dr Sue Wareham of the Medical Association for Prevention of War outlines the local and global implications. And, she calls on the Federal Government to make an explicit declaration that nuclear weapons must never be used again under any circumstances.

Here’s a good news story about health to kick off 2021. It’s not about vaccines (despite their critical importance), but about the only weapons that threaten all of us and the environment we depend on: nuclear weapons.

On Friday 22 January, the Treaty on the Prohibition of Nuclear Weapons (TPNW), or nuclear weapons ban treaty, will legally come into effect. From that date, nuclear weapons – and every aspect of their existence including their development, testing, production, transfer, use and even possession – will be illegal under international law.

This is a huge achievement, and celebrations will be held around the globe, including in Australia.

The legal prohibition stemmed from the health and humanitarian impacts of the weapons. They incinerate cities, kill, maim, burn and irradiate humans by the million, and destroy just about everything that health professionals need in the event of disaster. Their use could well trigger a nuclear winter that reduces food crops to starvation levels. By any measure, that’s an unconscionable affront to the healing professions.

Similarly, the momentum that led to the ban treaty was driven by health and humanitarian organisations and practitioners, in collaboration with progressive governments.

The message of prevention, especially of catastrophes for which there would be little that health professionals could do in response, was key, and remains so.

The ban treaty is an especially proud achievement for health professionals in Australia, where in 2007 the Medical Association for Prevention of War (MAPW) initiated the International Campaign to Abolish Nuclear Weapons (ICAN), which played a leading role in the achievement of the Treaty.

The ban treaty is far from a symbolic victory; the implications are huge, even without all nations – including those with the weapons – yet coming on board. 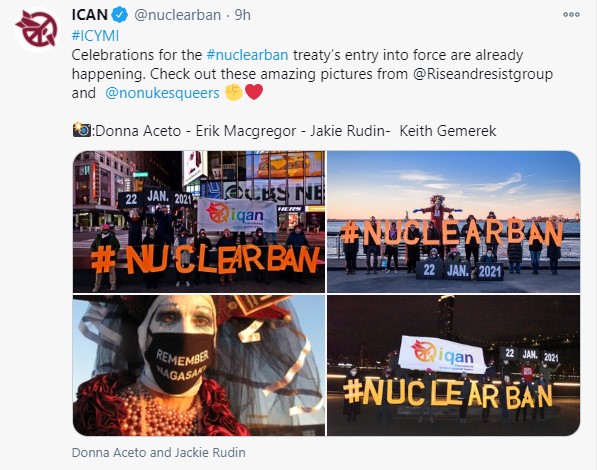 Nuclear weapons and those nations that possess or promote them will now be associated with illegality, which provides strong political leverage with which to press for abolition of the weapons.

This has certainly been the experience with the prohibition by treaty of other unacceptable weapons systems such as chemical and biological weapons, landmines, and cluster bombs.

Pressure will be brought to bear on financial, academic and other institutions that receive funding from, or invest in, the companies that make the weapons, to dissociate themselves from the purveyors of illegal goods; this has already begun (see, for example, here, here, and here) and will increase.

There are big implications for Australia. Our country does not possess nuclear weapons, but our military policies consistently promote the possibility of US nuclear weapons being used on our behalf, in accordance with so-called “extended nuclear deterrence” policy.

For this reason, Australia opposes the Treaty, and Australian governments have refused to declare that nuclear weapons must never be used again under any circumstances.

If there were a similar refusal to forswear the unleashing of, say, a virulent virus or poison gas on whole populations, such refusal would rightly be treated with outrage. And yet, the possible incineration of millions of innocent people remains national policy.

This is not only morally and medically repugnant, but such implicit threats of nuclear terror will now be, as of 22 January, illegal under international law.

The ban treaty comes none too soon. The Bulletin of the Atomic Scientists warned in January 2020 of the undermining of “cooperative, science- and law-based approaches to managing the most urgent threats to humanity”, and that “civilisation-ending nuclear war – whether started by design, blunder, or simple miscommunication – is a genuine possibility”.

The risk of nuclear war was assessed as higher than it’s ever been. If any further evidence were needed of the perilous state in which humanity exists, we were reminded recently that the US nuclear arsenal can be launched by one person, the president, regardless of whether that person happens to be an unhinged narcissist. 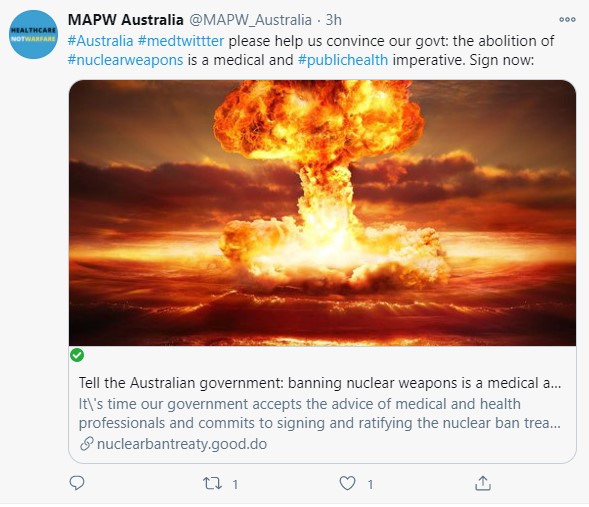 Australia’s policy must change. There must be an explicit declaration that nuclear weapons must never be used again under any circumstances. And there must be a commitment to the urgent abolition of these weapons as the only way to ensure this.

Preventive health demands nothing less, and the Treaty on the Prohibition of Nuclear Weapons is the only global initiative that is leading us towards these goals. Australia must sign and ratify it.

MAPW is calling on the Health Minister Greg Hunt to declare that:

Readers are encouraged to join the call; you can do so here. It will be delivered to the Minister on 22 January, the day the TPNW comes into force. It will also be sent to the Shadow Health Minister Chris Bowen. Pleasingly, ALP policy is to support the TPNW when in government; that commitment must remain solid.

Since the first – and, thus far, the only – use of nuclear weapons in war in 1945, health professionals have played leading roles in the quest for their elimination. This critically important role continues. We have the weight of medical authority, moral authority and now unequivocal legal authority with which to exert political pressure.

Dr Sue Wareham OAM is President of the Medical Association for Prevention of War, and board member, ICAN (the International Campaign to Abolish Nuclear Weapons) Australia.

As UN nuclear ban treaty enters into force, time for Australia to address its role and history

PrevPreviousNew report on health promotion – from #HealthReimagined. Download your free copy
NextTime to tackle obesity, another threat to global health and wellbeingNext