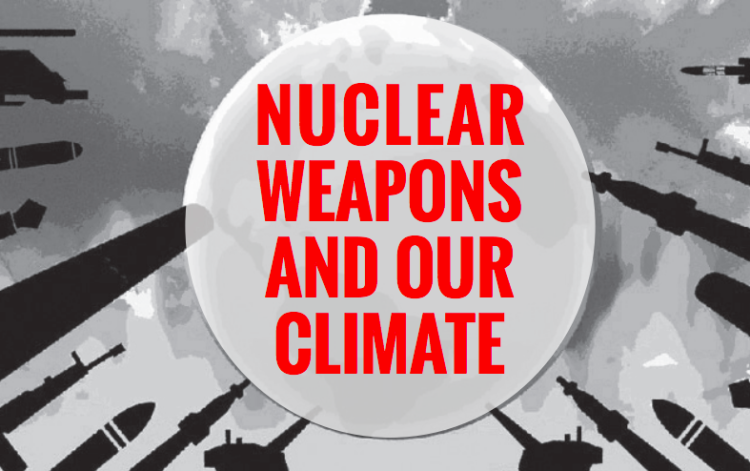 The International Campaign to Abolish Nuclear Weapons (ICAN) report, Nuclear weapons and our climate, paints in horrific strokes how a “limited” nuclear war would ignite massive firestorms that blanketed the entire globe in smoke, would “cool, dry and darken the world” for more than two decades and put two billion people at risk of starvation.

It’s a timely report given renewed efforts to promote nuclear power as the answer to the climate crisis.

In it Ruff asks:

What effect would nuclear war have on the climate? What has nuclear power generation got to do with nuclear proliferation? How could the massive amounts of radioactivity inside nuclear reactors, fuel and waste storages cause radiological contamination akin to nuclear weapons? And could nuclear facilities themselves be turned into weapons?”

Ruff is founding chair of the International Campaign for the Abolition of Nuclear Weapons (ICAN), the Australian born global initiative which won the 2017 Nobel Peace Prize.

This article is published as part of the Covering Climate Now initiative, putting the spotlight on the climate crisis in the leadup to Tuesday’s UN Climate Action Summit.

Croakey readers can also check out this impassioned 90-second speech on the existential twin threats of climate chaos and nuclear weapons from young ICAN supporter Mungo Sweeney, who was awarded the Victorian Parliament Prize (Years 7-9) for setting out this vision.

Most of us now understand how crucial to human and planetary health is a stable and hospitable climate. However too few of us are aware that the most acute, immediate danger to our climate comes from nuclear weapons.

Less than 0.5% of the global nuclear arsenal, targeted on cities in just one region, would ignite massive firestorms, lofting millions of tons of smoke high into the atmosphere.

This smoke would blanket the entire globe, and cool, dry and darken the world beneath for more than two decades. But it would heat the upper atmosphere more than 50°C, and rapidly deplete the ozone protecting us from harmful ultraviolet radiation.

100 Hiroshima size bombs – 0.1% of the global nuclear arsenal’s explosive power – for example in a war between India and Pakistan, would produce over 5 million tons of smoke, cooling average surface temperatures by 1.5°C, with much greater declines of 5-8°C over continents.

The resulting sustained decline in food production worldwide would put 2 billion people at risk of starvation. The combined current arsenals of India and Pakistan – the world’s most rapidly growing – number 270-290 nuclear weapons.

New studies, to be published in coming weeks, show that a nuclear war between India and Pakistan could kill more than 75 million people directly and drop global temperature 4o C.

Launch of Russian and US long-range nuclear weapons would plummet global temperatures 10°C, a severe abrupt ice age that would in all probability end human, and much other, life.

The only reliable way to prevent nuclear war is to eliminate nuclear weapons before they are otherwise inevitably used again.

Risks of a climate-stressed world

… after nuclear war, human induced global warming is the greatest threat to human life on the planet.”

Military establishments worldwide assess that global warming is a pre-eminent and accelerating threat to security that amplifies other threats.

The US intelligence community annual assessment provided to Congress on 29 January 2019 warned that climate change and environmental degradation increase stress on communities around the world and intensify global instability and the likelihood of conflict, increasing the danger of nuclear war.

The number of violent conflicts worldwide which involve at least one state outside the area of direct conflict, has increased sharply, from no more than 6 per year in the two decades before 2010, to 20 per year by 2017.

Growing food and water insecurity and other stresses exacerbated by climate change are helping drive this upsurge, and the highest ever number of people forcibly displaced worldwide – reaching 70.8 million in 2018.

The 1977 Ranger Uranium Environmental Inquiry recognised that nuclear power contributes to an increased risk of nuclear war, and that “this is the most serious hazard associated with the industry.”

Uranium enrichment plants can produce both reactor grade and weapons grade uranium. Currently 14 nations have them.

Laser enrichment technology initially developed in Australia could make enriching uranium more compact and concealable. Highly enriched uranium (HEU) is one of the two fissile materials used for nuclear weapons. The other is plutonium, inevitably produced inside reactors, which can be extracted from spent nuclear fuel.

South Africa, Pakistan and North Korea primarily used the HEU route to build weapons; India and Israel primarily used plutonium. All used facilities and fuel that were ostensibly for peaceful purposes. France and the UK used reactors which also produced electricity to produce plutonium and tritium for nuclear weapons.

US nuclear weapons on average contain 4 kg of plutonium and 12 kg of HEU. Current global stockpiles of fissile materials – 1340 tons of HEU and 520 tons of separated plutonium – could build around 200,000 nuclear weapons.

Thus ending production of fissile materials, keeping current stocks extremely securely, preferably under international control, and eliminating them wherever possible will be crucial to achieving and sustaining a world free of nuclear weapons.

Climate disruption and nuclear war demand win-win solutions. Nuclear power as a claimed climate friendly energy source is a lose-lose proposition. As noted in 2010 by the Board of the Bulletin of the Atomic Scientists, “Nuclear war is a terrible trade for slowing the pace of climate change.”

As the costs of nuclear power have risen to more than twice that of either wind or solar power with storage, motivations to maintain civilian nuclear infrastructure and workforce expertise in order to support nuclear weapons programs has become increasingly obvious in France, Russia, UK and US.

Nuclear reactors and their spent fuel pools contain large amounts of radioactivity which is more long-lived than that produced by nuclear weapons. Both require continuous cooling. Spent fuel pools have no containment other than a simple roof.

In 1981 nuclear physicist and Nobel Peace Laureate Joseph Rotblat issued a stark warning about the risks to the security of nuclear reactors.

What happened in Fukushima because of poor design and a large earthquake and tsunami could equally happen because of commandos disrupting the power or cooling water supply for reactors and/or spent fuel pools long enough to cause meltdown or explosions.

Cyberattack, or electricity supply disruption and equipment failure caused by the electromagnetic pulse (EMP) of a single high altitude nuclear explosion could simultaneously disrupt nuclear reactors across a continent.

Attacks on nuclear reactors have taken place: between Iran and Iraq during their 1980-8 war, Israeli airstrikes destroying nuclear reactors under construction in Iraq (1981) and Syria (2007), the South African ANC attack on the Koeberg nuclear power plant, 1991 US attacks on Iraqi nuclear facilities and Iraq firing Scud missiles at Israel’s Dimona nuclear reactor.

Disruption of these could cause severe and extensive radioactive contamination requiring long-term evacuation of large areas.

Out of the global heating frying pan…

The links between nuclear weapons, nuclear reactors, and the materials that power both are deep and inextricable.

Out of the global heating frying pan and into the fire of radioactive incineration, nuclear ice age and famine is a lose-lose dance with extinction.

A healthy and sustainable future for all life on Earth requires that we rapidly transition to renewable energy and net zero greenhouse emissions, and prohibit and eliminate nuclear weapons, with the utmost urgency demanded.

The best available path forward on nuclear weapons is the historic UN Treaty on the Prohibition of Nuclear Weapons. All nations should join and implement it without further delay.

Declaration: Croakey editor Marie McInerney is a former Board member of ICAN Australia.