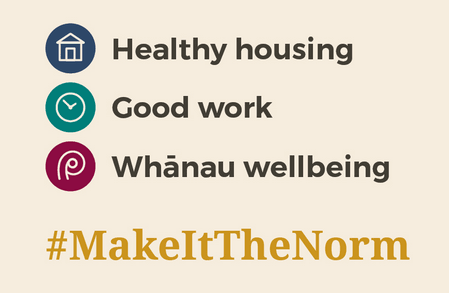 New Zealand Labour leader Jacinda Ardern today laid out plans for her first 100 days in office if she can deliver a Labour-led Government after the September 23 national poll, saying families, education and the environment would be top priorities.

As this Guardian report outlines, Ardern has experienced an astonishing surge in popularity since taking over on 1 August. She has increased her party’s polling results by 19 points in just over a month and put new life into the campaign and policy environment ahead of the poll which the Nationals Government led by Prime Minister Bill English had been expected to easily win. You can read his election campaign launch speech here.

Ahead of the poll, the Royal Australasian College of Physicians (RACP) has launched an election statement calling on all parties o make health equity the norm by setting policies that address the social determinants of health and wellbeing. It urges action on unhealthy housing, insecure and precarious work and mental health.

In the post below, RACP NZ President Dr Jonathan Christiansen outlines the main priorities being pursued in its nonpartisan #MakeItTheNorm campaign and spotlights case studies that  illustrate the concerns.

See also this focus on health snapshot from the New Zealand Herald.

The Royal Australasian College of Physicians (RACP) recently launched an election statement calling on New Zealand politicians to make health equity the norm by setting policies that address the social determinants of health and wellbeing. This statement has attracted broad support across the health sector and ongoing national media coverage in New Zealand.

As physicians and paediatricians we care for patients struggling with preventable illness every day. We know that unhealthy housing, insecure and precarious work and poor mental health directly impact our patients’ health and wellbeing. Too often we treat illness knowing our patients are returning to social situations that will perpetuate poor health.

The fact that unacceptable levels of child poverty and shocking housing conditions have become ‘normalised’ in our society needs to change.

Inequities in health outcomes will persist unless such stark social inequities are urgently addressed. Taking action on the social determinants of health needs a whole-of-society response led by government, and such action is overwhelmingly supported by the evidence.

We want policy-makers to make health equity the norm to improve health outcomes for the most vulnerable people in our communities.

The #MakeItTheNorm campaign is non-partisan. We are seeking to influence baseline policies that impact the health and wellbeing of our communities and support health equity long term, rather than which political party or coalition has the right to govern post-election.

In developing our position and recommendations, we have reviewed the evidence and drawn on the first-hand experiences of our doctors working at the clinical coalface, to develop case studies that tell the stories of real life patients managing multiple, preventable health concerns that are exacerbated by their housing, work and family struggles.

All characters have interactions with the health system: from inpatient paediatrics, to a youth clinic, to primary care. We spotlight six members of a whānau (family) who represent ages and stages across the life course, from a toddler to an older woman, and illustrate the complexity, interaction and affect between housing, work and whānau wellbeing.

Our case study whānau can be found in any town or city in New Zealand, living in a privately rented house. The house is overcrowded: high prices for rent, redundancy and separation means that 12 members of an extended whānau are living together in a three bedroom house, with teenage children living in a garage. 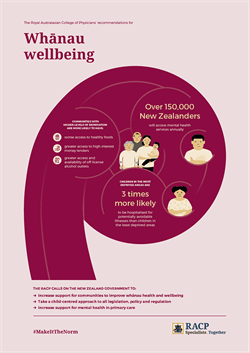 Amy has been admitted to the Paediatrics ward for intravenous antibiotic treatment of suspected Staphylococcus aureus infection (cellulitis) resulting from her existing dermatitis. Amy lives with her mother, her siblings, and extended whānau in a rented house. She shares a mattress in the living room with her sisters, with the children sharing blankets, pillows and sheets. Amy also shares a towel with her sisters, which increases her susceptibility to infections.

During the winter, Amy, her mother and cousins sleep in the living room and warm it with a small fan heater. The house has one bathroom with a shower but no bath, which means that Amy is unable to use the bath oils recommended by her GP to treat her inflamed dermatitis. The treatment is not funded by PHARMAC*, and is too expensive for Amy’s mother to purchase without a prescription.

Amy is overweight for her age and height, and she has symptoms of obstructive sleep apnoea, which causes her to snore and breathe heavily during sleep, disturbing her siblings. She has trouble concentrating at school as she is tired from poor quality sleep, as well as itchy from eczema. Amy is a frequent target for teasing and bullying from other children due to her condition. As Amy tells us, there are no computers or books available to assist Amy or other children in the whānau with their learning and homework, and there is no quiet place to study.

‘It’s itchy and sore and red. It’s hard to sleep in hospital because the eczema is all over my back and my knees – there’s no way to sleep so it doesn’t hurt. It’s on my face too, and in the morning there are flakes of skin on my pillow. The eczema is feels hot and puffy. Yellow-green pus oozes out of the sores on my arms. When the eczema gets bad I cry because it hurts so much.

‘Kids at school make fun of me when I have eczema on my face. They call me names and I cry. I don’t want to go to school. At school I am always tired, and my skin itches under my clothes. I can’t focus on what the teacher is saying, and I can’t understand the work. We don’t have any books or a computer where we stay.’

Brian is a 48 year old male with a history of chronic obstructive pulmonary disease (COPD). He is a heavy smoker of more than 30 years. Brian was made redundant from his position as a machinist in a factory when the company decided to shift production overseas. He has been out of fulltime employment for two years since his redundancy. His COPD symptoms have worsened since the redundancy, and he is experiencing symptoms of depression.

Brian’s respiratory physician notices Brian’s persistent low mood during several clinic appointments and comments on it in follow-up notes sent to his GP. When meeting with Brian, the GP suggests counselling, offering a referral. The GP also mentions Brian could consider antidepressant medication. Brian’s GP asks him about his alcohol intake and Brian states that he drinks most days to self-medicate. He frequently will drink alone as a way to pass the time and get out of the house.

‘I feel pretty down most of the time, especially as I can’t provide for my family in the way that I used to – the dole isn’t much to go on these days. I had an appointment with the doctor at the hospital for my breathing and she asked me how I was doing – she knew about the redundancy. I thought I was going to burst into tears, the question took me by surprise. The GP asked me lots of questions about how I’m coping since the factory closed, and suggested I think about going on some medication, and that I talk to a counsellor.

I haven’t done anything about it yet – I don’t know if that is something I want to do right now. I would rather have a few drinks, and not think about that sort of stuff. At least when I’ve had a few it’s easier not to get stuck in it. I’ll drink most days – have done since I lost my job. At home or down the pub, doesn’t really matter. Alcohol is pretty easy to get around here.’

Doctors are increasingly seeing repeat admissions for preventable illnesses, especially in children and older people, caused by systemic social inequities. It’s futile to treat illness and make patients well, only to send people right back to the same conditions contributing to poor health. This daily experience of clinical futility erodes the passion and dedication of all physicians and paediatricians, but especially of our doctors in training. Some trainees are so disheartened as to step away from medicine and seek other opportunities where they perceive they can really make a healthy difference.

Loss of excellent future doctors from our training programs will only exacerbate poor health outcomes for our most vulnerable people. Without action to address social inequities that impact on health, the current inequities in health outcomes will persist. 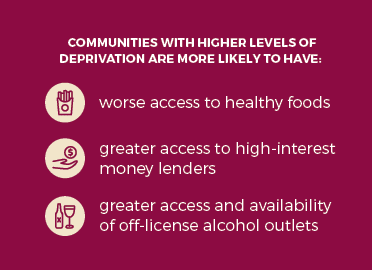 Health equity for all

The RACP recognises health as multidimensional, encompassing more than treating illness and disease.

As NZ President I am proud to lead our College’s NZ Election Statement and our call for action. Former Prime Minister Norman Kirk said: “People don’t want much – just somewhere to live, something to do, someone to love and something to hope for.”

Where people live, how they spend their time, and who they live with and support shapes people’s health. Health equity is achieved when the conditions in which people grow, live, work and age support health and wellbeing. Systems, structures, policies and programs may be organised and designed to enable health and wellbeing, but this is only possible when people do not experience barriers to access which in turn are the result of compounded systemic injustice which is, simply put, unfair.

The evidence overwhelmingly supports action on the social determinants of health through a whole-of-society response: central and local government, communities, non-government organisations and industry can work together to support health and wellbeing for all members of our society.

Dr Jonathan Christiansen is a general cardiologist with a particular interest in non-invasive imaging of the heart.

About The Royal Australasian College of Physicians (RACP):

The RACP trains, educates and advocates on behalf of almost 2,000 physicians and paediatricians and close to 1,000 trainees in New Zealand. With a total membership of almost 25,000 Fellows and trainees, the RACP is the largest medical college in Australasia. The RACP trains physicians, often referred to as specialists, in more than 33 medical specialities. Beyond the drive for medical excellence, the RACP is committed to developing health and social policies which bring vital improvements to the wellbeing of patients.

* PHARMAC is the New Zealand government agency that decides which pharmaceuticals to publicly fund in New Zealand. PHARMAC makes choices about District Health Boards’ (DHBs) spending on vaccines, community and cancer and other hospital medicines.

PrevPreviousSome big questions about life and death: challenging “conveyer belt” of Western medicine and wishing for a loving end
NextMaggie Beer calls for “revolution” in quality of food in aged care, hospitals and palliative careNext