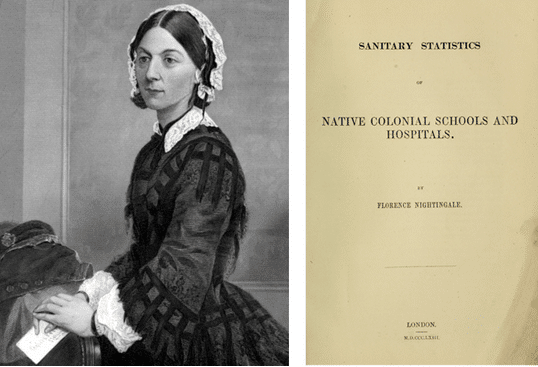 There is heightened awareness this year around International Nurses Day, held each year on 12 May to honour the “lady with the lamp”, with the 2020 event marking the 200th anniversary of Florence Nightingale’s birth.

However, as part of Croakey’s ongoing Acknowledgement series examining harms caused by health systems and professionals, New Zealand Nurses Organisation co-chairs Grant Brookes and kaiwhakahaere Kerri Nuku say that many nurses, in Aotearoa/New Zealand and beyond, find Florence Nightingale’s statements on colonisation and the fate of Indigenous people a “dangerous legacy”.

For this reason, they write, NZNO’s board of directors will celebrate other nurses and models of health on International Nurses Day this year.

Their article was first published in Kai Tiaki Nursing New Zealand and is republished here with permission.

Dr Janine Mohamed, now CEO of the Lowitja Institute and former CEO of the Congress of Aboriginal and Torres Strait Islander Nurses and Midwives (CATSINaM), has urged in many speeches for Australian nurses and midwives to honestly interrogate the legend around Nightingale, “the world’s most famous nurse”, to acknowledge the harms caused by colonial views towards Indigenous people.

Her CATSINaM successor Mel Robinson last year also shared her concerns with Croakey about the continued veneration of Nightingale in the three year Nursing Now campaign.

It’s surely testament to the huge significance of Florence Nightingale in the development of our profession that 200 years after her birth, she continues to stimulate debate.

On the one hand, her contributions to raising the status of nursing, establishing formal training and applying statistical methods in sanitary reform are celebrated to this day.

But the historical figures we choose to venerate say a lot about who we are. And the legacy Florence Nightingale left for us is a mixed one – especially here in the South Pacific. It’s right that her legacy should be open to scrutiny.

For decades, feminist nurses in New Zealand have been uneasy about Nightingale’s insistence that “to be a good Nurse one must be a good woman”. Her instructions to nurses (dutifully reprinted in Kai Tiaki, 63 years later) told us to always display the “higher or holier” womanly virtues of forbearance and endurance, and that we must “above all” obey the male doctors.

Nurse leaders in Aotearoa have long understood how Nightingale’s opposition to registration and higher education for nurses undermined our professional autonomy and fostered the eventual dominance of the medical model of health.

In the end, however, it was Nightingale’s troubling role in colonisation which led the NZNO Board of Directors to decide that on International Nurses Day 2020, we’ll be celebrating our Indigenous and home-grown nurses instead.

It’s a little-known fact about Florence Nightingale that she was a close advisor to the Governor of New Zealand, Sir George Grey, during his second term in office from 1861-68. She also advised colonial authorities in Australia and elsewhere.

The collected letters and reports she sent to Grey and others, published in 2004, reveal a long-hidden side of her legacy.

It is now known that Nightingale supported the alienation of Māori land, in order to force migration to European settlements and to bring contact with what she termed, “the inestimable blessings of Christian civilisation”.

“The object should be to draw them gradually into better habits and gradually to civilise them”, she said, in her Note on the New Zealand Depopulation Question (Ed: see reference sources below).

To those who objected, and said that “provision of land should be made for the exclusive use of the existing tribes” in the colonies, she replied: “this by itself would be simply preserving their barbarism for the sake of preserving their lives”.

Perhaps her most disturbing advice, in the present circumstances, was her dismissal of reports about outbreaks of infectious diseases among indigenous communities following contact with Europeans.

“People assert that they always have influenza after a boat comes to them from the mainland”, she wrote, in a letter to the Colonial Office in London. “But, after all, is it a fact?

“Diseases and eclipses used to stand as effects to causes, in semi-scientific observations of the Middle Ages. It is the usual error of quarantine reasoning”, she concluded.

Nightingale advised that efforts to support the heath of indigenous people should focus elsewhere.

Her 1863 report on Sanitary Statistics of Native Colonial Schools and Hospitals, produced at the suggestion of Governor Grey, explained the high rates of child mortality using the then-discredited “miasma theory”.

“Within or near the tropics the miasmatic class of diseases occasions most of the mortality at the earlier periods of life.”

In her Note on the New Zealand Depopulation Question, Nightingale attributed the prevalence of “chest diseases” among Māori to “the introduction of pigs, as an article of food.”

Running through all of her colonial writings is the idea that population decline was due to inherent defects of Indigenous people themselves, when compared to superior Europeans.

Excessive consumption of pork was responsible for the “bad habits, filth, laziness, skin diseases and a tendency to worms and scrofula” which she believed were characteristic of the Māori people (and also of the Irish).

“Incivilisation, with its inherent diseases, when brought into contact with civilisation, without adopting specific precautions for preserving health, will always carry with it a large increase in mortality”, she said.

“The decaying races are chiefly in Australia, New Zealand, Canada and perhaps in certain parts of South Africa. They appear to consist chiefly of tribes which have never been civilised enough or had force of character enough to form fixed settlements or to build towns.”

“These aboriginal populations… appear to be far more susceptible to the operations of causes of disease arising out of imperfect civilisation than are civilised men (meaning by “civilised” men who can live in a city or village without cutting each other’s throat).”

“As for the Australians, in their present state, very few of the human race are lower in the scale of civilisation than these poor people.”

Faced with such frank expressions of racism, Nightingale’s defenders argue that she was a product of her time and that whatever her faults, her priority was the health of indigenous people.

Yet other public figures of the time were able to see more clearly. A select committee report from the Legislative Council of Victoria in 1858-59 found that, “The great and almost unprecedented reduction in the number of the aborigines is to be attributed to the general occupation of the country by the white population.”

Nightingale rejected this conclusion, arguing that decline is “not a universal law when savages come into contact with civilisation.”

Her criticism of the report suggests where her priorities really lay: “I hope the time is not far off when such a stigma as it affixes to the empire might be wiped away.”

Or as she put it elsewhere, “This question of the fate of aboriginal populations is one closely concerning our national honour.”

Here in Aotearoa, Nightingale’s upper class paternalism and her White Supremacist views were inculcated in many (though not all) of our early nurses.

These attitudes were then carried across the South Pacific, as the New Zealand Department of Health assumed responsibility for nursing services firstly in the Cook Islands in 1903, then in Western Samoa and Niue in 1920 and later in Fiji and Tonga.

Nightingale’s colonial legacy in the region re-surfaced in 2018, in a debate at the South Pacific Nurses Forum (SPNF) in Rarotonga. Indigenous nurses expressed their pain that the global Nursing Now campaign planned to celebrate the bicentenary of her birth.

A resolution, moved by NZNO and seconded by the Fiji Nursing Association, was passed unanimously, “To recommend and request that two representatives from SPNF representing indigenous nurses be appointed on to the Board of Nursing Now Global Campaign.”

On behalf of the SPNF Steering Committee, we wrote to the Board of Nursing Now in early 2019. We explained that, “Florence Nightingale wrote about our Indigenous peoples in the South Pacific in a racist, paternalistic and patronising way.

“The continued veneration of Florence Nightingale in the Nursing Now campaign is therefore disrespectful and painful. It continues to highlight for our Indigenous nurses that their traditional knowledge and ways of being and doing are not being respected. Raising her as the beacon for nursing globally causes trauma and re-ignites the history and pain of colonisation.

“It was in order to address these issues of Eurocentrism that we had lobbied to gain two seats on the Nursing Now Board.”

Our request was declined – coincidentally, around the same time as the Waitangi Tribunal released its landmark report on the WAI 2575 claim.

“The severity and persistence of health inequity Māori continue to experience indicates the health system is institutionally racist,” said the Tribunal, “and that this, including the personal racism and stereotyping that occurs in the primary care sector, particularly impacts on Māori.”

As nursing leaders in 2020, we see Aotearoa’s most pressing health issue to be health equity. The persistent and systemic health inequities have been 200 years in the making. Our health inequities will continue if we insist on being wilfully blind to their existence, or fail to acknowledge their origins.

For these reasons, the decision for us and for the NZNO Board was obvious. Celebrating Florence doesn’t fit with our vision. Instead, in the Year of the Nurse and the Midwife, we are choosing to celebrate those who move us forward to a bicultural future of equity for all.

PrevPreviousCOVID-19 has lessons for journalists covering the climate crisis
NextWhat will winter and COVID19 mean for rural and remote communities? CroakeyVOICES investigatesNext