On breaking down the barriers between health and legal issues: insights from @fionalander as @wepublichealth

In the chair last week at @wepublichealth, doctor and lawyer Dr Fiona Lander generated a lot of interest in the connections and crossover of legal and health issues, particularly for disadvantaged people.

Fiona is currently working at Austin Health and Corrs Chambers Westgarth and on secondment with the Advocacy-Health Alliance Network at Justice Connect, assisting with the establishment of partnerships between healthcare and legal services.

She previously worked for 2 years with the United Nations Special Rapporteur on Health in Mumbai, India, and with the health law and human rights team at WHO, Geneva – which also informed some very timely and interesting discussions during her time at @wepublichealth as reports emerged about the death and injury toll to asylum-seekers at the Manus Island detention centre. Fiona also conducts research and provides public health and human rights consulting services to NGOs and international organisations, and lectures at the Copenhagen School of Global Health. She tweets as @fionalander.

Below – with some tweets embedded but many others in text versions – are some of the highlights of her conversations last week about the Advocacy-Health Alliance Network, as well as a selection of tweets from her #askWPH session on the intersection between (in)justice and health.

Fiona opened by explaining that the Advocacy-Health Alliance model involves provision of legal services to patients within healthcare settings and are based on the successful Medical Legal Partnership model, which originated in the USA.

The Advocacy-Health Alliance model in Australia is similar to the US model, but broader – advocacy does not only involve lawyers!

Similarly, we don’t want to adopt only a medical model: Advocacy-Health Alliances are intended to involve ALL healthcare professionals.

An Advocacy-Health Alliance can take many forms, but involves three core elements: firstly, delivery of legal/advocacy services to patients.

Secondly, Advocacy-Health Alliances aim to change institutions by educating health and legal practitioners and enabling them to collaborate.

There are, she said, a number of Advocacy-Health Alliances in Victoria that do incredible work in tackling the social determinants of health.

Inner Melbourne Community Legal run an amazing outreach program at the Royal Women’s Hospital, called “Acting on the Warning Signs“, which aims to identify and intervene early in cases of family violence and to train healthcare professionals to identify and refer women with legal issues to the legal clinic.

Women experiencing family violence can confidentially visit a lawyer at Royal Women’s Hospital without fear of reprisals from their partner.

Another brilliant Advocacy-Health Alliance that operates in Victoria is the First Step Legal Service, co-located with the First Step program, that provides a unique, truly multi-disciplinary service to people dependent on drugs or alcohol.

Through First Step, patients have access to doctors, counsellors, mental health nurses – just about everything you need to kick addiction

However, the First Step founders realised that this wasn’t enough: many patients had legal issues which threatened their recovery.

First Step realised that early intervention by a lawyer, as soon as patients received criminal charges, kept them on track & aided recovery

So, the First Step Legal Service was established, to provide legal assistance to patients recovering from addiction.

The aim of the First Step Legal Service is to support clients, and to present matters that should mitigate their sentence to the court.

This ensures that any court sentence furthers the process of rehabilitation and increases the prospect of the client re-engaging in society.

Here’s a taste of the feedback the discussion was generating:

Of course, it is not a surprise that persistent disadvantage is associated with legal problems – but the survey uncovered more than this. It found:

Which prompted this exchange: 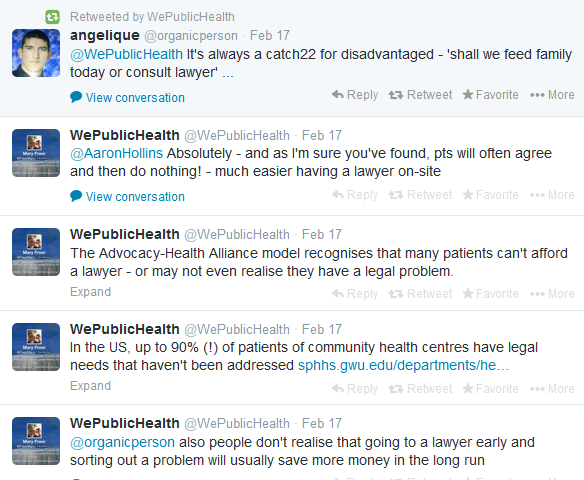 Fiona noted there are a number of AHAs in Victoria, including a great new project in Bendigo. Various medical and legal services have been co-located in Victoria for decades, for example at West Heidelberg/Banyule. BUT AHAs are not limited to Victoria, with a new partnership soon to be launched in Redfern in Sydney. She noted:

She then looked at specific clinical areas, saying one in which many legal issues arise is cancer treatment and palliative care.

Lawyers can play an important role. Cancer patients have particular non-medical needs: these have been written about more here. Patients receiving any kind of palliative care often need assistance with advance directives, wills and other end-of-life decision-making

Another great Advocacy-Health Alliance is the Baker & McKenzie pro bono legal clinic at Peter MacCallum Cancer Centre. Social workers at Peter Mac found cancer patients were not seeking legal help as they were too ill or weren’t aware assistance was available.

This presentation talks about the lessons Peter Mac and Baker & McKenzie learned in establishing the legal clinic.

After the clinic started, lawyers and healthcare workers realised a major problem for cancer patients was early access to superannuation. Baker & McKenzie/Peter Mac successfully lobbied for superannuation regime changes to remove penalty fees and ensure access for their clients.

For their legal clinic, @PeterMac_News received an ACHS award for outstanding achievement in non-clinic service

83% of cancer patients reported that legal services helped to reduce their worries and stress, and 51% reported a positive financial effec

In an #AskWPH session, Fiona also provided great discussion and plenty of resources on the links between (in)justice and health:

The NT has claimed its mandatory alcohol rehab program as a win – but it has raised real concerns.

‘It’s impossible out there. There’s no work for us. All my friends drink and alcohol is so readily available…’

If we are going to get serious about the #SDOH, we need to look at employment, lack of opportunities in rural/remote areas, etc.

Public health practitioners should also be concerned about #alcohol #mandatory #treatment in the NT.

Some great resources at @SmartJusticeAus explain the alternatives to imprisonment, and the benefits of early intervention.

Many people are pushing the concept of smarter justice, recognising that disadvantage leads to incarceration.

Exactly the same problems exist in the health and justice systems! More needs to be spent on prevention of crime, rather than punishment.

Public health practitioners are well aware that it is hard to push spending towards preventive rather than curative strategies.

There needs to be better recognition of the links between #SDOH and incarceration. If we address #SDOH, we address both crime AND health.

Public health practitioners are uniquely placed to point out that the goal of deterrence is really not met in the presence of addiction.

The four main goals of the criminal justice system are: deterrence, protection of the public, punishment and rehabilitation/reform.

The public health community needs to become aware that massive rates of incarceration are NOT achieving these goals, & are causing ill-health.

The problem is that it is easier (&politically popular) to build more prisons and jail more people than address the causes of these issues.

Our high incarceration rates are all related to the same issues that cause ill-health: the social determinants of health.

Indigenous Australians make up >1/4 of our prison population: this has been described as a “social policy disaster“.

Imprisonment not only often fails to stop reoffending: it is expensive, inefficient and detrimental to health.

1/3 of prisoners who continue to inject drugs in prison contract hepatitis C; they then pose a health risk on release.

The @WHO recommends NSPs in prisons to prevent spread of bloodborne viruses in prison, & post-release in community.

Until recently there have been no needle & syringe programs in Australian prisons; the ACT announced a trial in 2012.

The lack of NSPs is partially b/c in 1991 a NSW prison officer was stabbed w/ a needle, contracted HIV & died of AIDS.

The NSW incident of an attack using a needle (and subsequent HIV contraction) is the only known case in the world in which this has occurred.

Prisoner health is typically poor: 4/5 are smokers, 7/10 recently used drugs, 1/3 have a chronic condition.Less than 20% completed school, and more than 50% were unemployed at the time of their imprisonment

And finally, some thoughts from others: