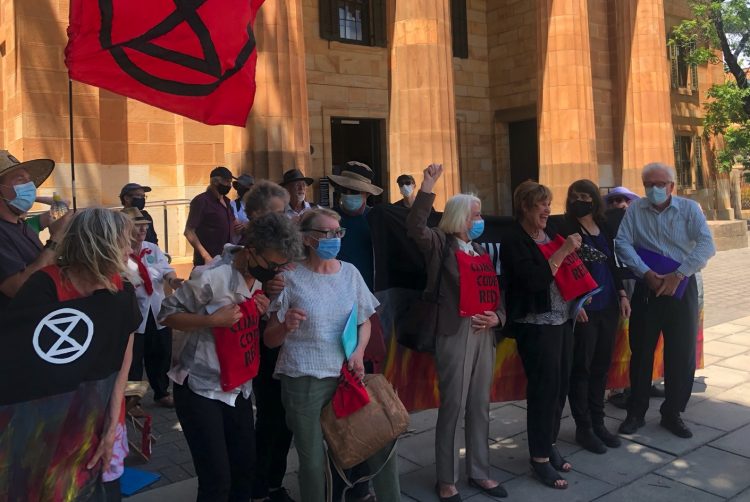 On breaking the law, for the greater good

Last Friday, he and other members of the group appeared in court, expecting to face a large fine and a conviction. Below, Laris shares some of the comments that he presented to the magistrate.

What has made me – a normally law abiding citizen – decide to break the law, together with seven other members of Extinction Rebellion, and glue ourselves and prams to Adelaide’s busiest street, blocking morning peak hour traffic on October 20?

I did this because I fear for the future of my daughter, grandchildren and great nieces and nephews. Mainly I was driven by desperation that our politicians are missing in action in the fight against climate change. Our action took place in the immediate lead up to the COP 26 meeting in Glasgow.

All my training and experience in public health tells me that the global warming and subsequent climate change we face are going to be very unhealthy for all inhabitants of planet earth. The health of our beautiful blue planet itself will be under threat.

Our group of eight were arrested and held in custody on the day. Last Friday we faced court and anticipated a large fine (blocking traffic carries a maximum penalty of $2000) and a conviction. We pleaded guilty and had each spent many hours preparing our plea to the court.

Magistrate David McLeod heard that the action was planned to minimise inconvenience but to make a strong statement of concern to government about the dangers of climate change and its impact on future generations.

Despite the police prosecutor calling for convictions and a deterrent penalty to prevent similar actions, Magistrate McLeod determined that no convictions were to be recorded and that the accused were to be released without further penalty beyond the hours they had already spent locked up in the city watch house.

Supporters of Extinction Rebellion say this amounts to endorsement by the court of the right to non-violent civil disobedience.

The following is an extract from the court submission I made:

I acknowledge that my action did inconvenience some motorists, I apologise for this. I contend, however, that this extent of inconvenience pales into insignificance compared to the consequences of continued inaction to address the likely impacts on many, many more people of continuing and worsening climate change and its impacts of health and wellbeing and that the impact of my actions may in some small way help to build momentum to reverse government inaction and to alleviate those impacts. While I do not intend to re-offend, I do believe that non-violent civil disobedience can be a legitimate form of democratic expression.

My reasons for committing this offence are twofold: There is unequivocal evidence firstly that the effects of climate change  are likely to threaten the viability of human and other life as we know it – if serious action is not taken urgently  to stop the growth and ultimately to curtail the use of fossil fuels. Furthermore, current action by the Australian and other governments is inadequate to avoid catastrophic outcomes in the lifetimes of children born today.

Secondly, I have personal reasons for highlighting the need for urgent action on the climate emergency. In May this year a group of children went to the Federal Court of Australia accusing  Environment Minister Sussan Ley of failing to show a duty of care to future generations by approving new coal mines. In his judgement Justice Bromberg said the evidence presented to the court showed the potential harm the children could face due to global heating “may fairly be described as catastrophic”. By the time my daughter is my age and my grandchildren and great nieces and nephews are in their 40s and 50s Adelaide is likely to be already experiencing summer daytime temperatures in excess of 50 degrees. That is not compatible with human life continuing as we know it. Crops will fail. Water supplies will falter. I owe it to my child, my grandchildren , great nieces and nephews their descendants and to all their contemporaries to do what I can to prevent such a grim scenario.

I became involved with Extinction Rebellion in 2019 because it was increasingly evident that the Australian Government showed no intention of responding to what is clearly a climate emergency that threatens to undermine the systems that support human (and other life) health and wellbeing on this planet, within the lifetime of my child and her children. The warnings from scientists have been so loud, so serious and so consistent that I could not in good conscience stand by and do nothing.

The last time I was involved in civil disobedience was nearly 40 years ago in 1982. I altered a cigarette advertising bill board from “Marlborough Country” into “Cancer Country” as part of an international campaign to get cigarette advertising banned. Since then the national rate of cigarette smoking has halved and the burden of disease from lung cancer and emphysema has fallen and thousands of lives have been saved as a result.

The civil disobedience practice used by Extinction Rebellion has a long and proud tradition. Its philosophical roots lie deep in western thought: Cicero, Thomas Aquinas, John Locke, Thomas Jefferson and Henry David Thoreau – all sought to justify conduct by virtue of its harmony with some antecedent superhuman moral law. The tradition continued with the campaign to abolish slavery,  the suffragettes struggle for the vote to women, Ghandi’s salt march and the US civil rights campaign of Dr Martin Luther King.

The principle of civil disobedience has achieved some standing in international law through the war crime trials at Nuremberg, Germany, after World War II which affirmed the principle that individuals may, under certain circumstances, be held accountable for failure to break the laws of their country. Given that the Australian Government has shown little inclination to acknowledge or to address the climate crisis, my aim in taking part in this action was to draw public attention to the seriousness of the current emergency and the urgent requirement for stronger Government action .

I have, this year, retired from working, most recently in medical professional regulation. I will be 71-years-old on 21 December. I hold a bachelor degree in social work and a master’s degree in public health. I have, at various times, been a member of the Medical Board of South Australia, a member of the inaugural national Medical Board of Australia, the board of the Queen Elizabeth Hospital, the Board of the Conservation Council of South Australia, the Policy Council of the South Australian Council of Social Service and Chair of the Health Consumers Alliance of South Australia. I am a member of the Public Health Association of Australia and the South-East Asia and Pacific regional deputy representation  of the Global Peoples Health Movement. In my most recent professional role I have been involved in reviewing and determining regulatory action for medical practitioners who have been  the subject of complaints by members of the public to ensure ongoing public safety.

I ask that your Honour consider my actions as arising from a sense of social duty and a commitment to public health and to the wellbeing of future generations. I have already been detained in the City Watchhouse for around three hours. I ask that no conviction be recorded against me and that any penalty imposed by this court reflect my sincere intention to act for the public good.

While I can’t be sure of the motivation of the Magistrate, it is entirely possible that he sees the importance of civil disobedience to letting our political leaders know that we are living through a climate crisis that is going to have accelerating impacts on human and planet wellbeing and which threats the very viability of human life on earth.

Civil disobedience is a call to action on the most pressing issue for 21st century health. As a public health action, it is akin to John Snow taking the handle off the cholera-infected water pump!

Consider taking public health action yourself by supporting Extinction Rebellion, becoming an Extinction Rebel yourself and joining the long and time-honoured tradition of passive civil  disobedience.

It is the very least we can offer our children and all those yet to be born: a healthy liveable planet.

See other articles at Croakey by Paul Laris.