Dr Lisa Schubert, a lecturer in nutrition in the School of Population Health at the University of Queensland, has been active on social media this week, sharing the news and community views in the wake of widely reported comments by TV presenter David Koch about public breast feeding

She compiled this Storify, for example, which brings together mainstream media, online media and community members’ comments.

In the article below, Schubert calls for leadership to ensure “a safe supportive environment for all breastfeeding mothers”.

She also suggests the public health community could be more proactive in engaging with the potential of social media, for example, by integrating it into participatory action projects.

The mother, her boobs, Kochie and the backlash

Last week a Queensland mother, Liana Webster, attending the Bribie Island Aquatic Leisure Centre with her three young children, was asked to relocate from the pool’s edge because staff found her breastfeeding indiscreet. She ended up cutting short the family outing by leaving the pool, and was refused a refund of the entrance fee.

Commenting on this incident on the Sunrise morning show last Friday, the host, David Koch, expressed his opinion that the pool staff were justified in asking the mother to relocate. He thought that “breastfeeding mums should respect their environment” and that they should be “a bit classy” when it comes to where and when they breastfeed.

As a consequence of the initial incident and the subsequent comments made by Koch on the Sunrise program, breastfeeding flash mobs (I much prefer this to ‘nurse- in’) have been staged outside the Chanel 7 Sydney studios, at the Bribie Island Aquatic Leisure Centre, and in Perth.

It is disappointing to hear these views aired on Australian television, and especially by a high profile television presenter, for these views are not in step with current community standards, are sexist and send negative messages about a healthy practice that benefits the whole community.

The black and white of breastfeeding

Breastfeeding is a public health issue. Breast milk is perfectly designed to meet the individual nutritional and immunological needs of infants, and the act of breastfeeding confers additional benefits to infants and their mothers. It’s environmentally friendly. It’s inexpensive. Yet, even when most Australian women initiate breastfeeding, we have a fairly average breastfeeding report card.

The most up-to-date data on breastfeeding rates in Australia is available from Growing Up in Australia: The Longitudinal Study of Australian Children (LSAC). This study reveals that, in 2004, 92 per cent of children were breastfed at birth. However, that figure fell steadily from month to month with 56% infants being fully breastfed at 3 months and 14% at 6 months.

After 6 months, the age at which the NHMRC recommends solid foods be introduced into a baby’s diet, breastfeeding rates continue to decline, with 28% children receiving some breast milk at 12 months, 9% of 18 months and 5% at 2 years.

On the legal side of the issue, Australian women have the right to breastfeed in public wherever and whenever they please. To ask them to stop is to act unlawfully under the Sex Discrimination Act (1984).

Breastfeeding. It’s as simple as….

The reasons for less than desirable breastfeeding rates by Australian women are complex. To start with, take the ready availability of manufactured breast milk substitutes, particularly when the way these are promoted and consequently perceived in many circles as ‘the norm’ is taken into consideration.

As a consequence breastfeeding is largely invisible. If that’s not discreet, I don’t know what is.

You may associate flash mobs with synchronised dancing in public places, but flash mobs are increasingly being used to make political points.

The organiser of one such event, Claire Jones-Hughes said: “The flash mob modus operandi fits perfectly with breastfeeding. A large group of mums feeding together creates an extraordinary sight. It’s the most obvious way to show support, sitting side by side feeding our children.”

Since then, similar events have been reported in China (to promote natural births over Caesarean sections and breastfeeding over infant formula), Malaysia where over 60% of the population are Muslims (to demand more nursing rooms in shopping malls and public places), and Singapore  (organised to promote breastfeeding in public, and to raise public awareness that breastfeeding is a natural act that should be accepted and encouraged).

The organisers of these events readily admitted that social media played an important role in sharing the story and promoting the event. Facebook and Twitter give individuals immediate access to a much larger audience than previously possible, facilitate coordination of events and promote publicity. It goes some of the way to democratise debates, when you don’t have to have your own television program to air your opinion.

The public health community is beginning to understand the power of social media, but we have a way to go. We are starting to think about How To Use Social Media Platforms To Amplify Public Health Messages, and we have seen public health message videos go viral (see the fabulous Dumb Ways to Die campaign), but the potential for communities to be empowered by amplifying their voices and concerns to shape agendas, by integrating social media into participatory action projects, is not yet commonplace.

The Australian National Breastfeeding Strategy (2010-2015) spells it out in the first sentence of their vision statement: Australia is a nation in which breastfeeding is protected, promoted, supported and valued by the whole of society. This is obviously about more than the delivery of the best maternity health services possible (although that would be a nice start).

We need leaders to advocate cultural change on a number of levels. We need to be celebrating breastfeeding and treating all mothers with respect. We need to make public places and events, and workplaces and employment schedules baby and breast feeding friendly, and we need to let those with attitudes out of step with contemporary community standards know that enough is enough.

A safe supportive environment for all breastfeeding mothers is the foundation upon which healthy infant feeding practices are built. Thank you to all the breastfeeding flash mobbers for reminding us of this.

And, as a footnote, the Ryan Gosling meme doesn’t hurt. 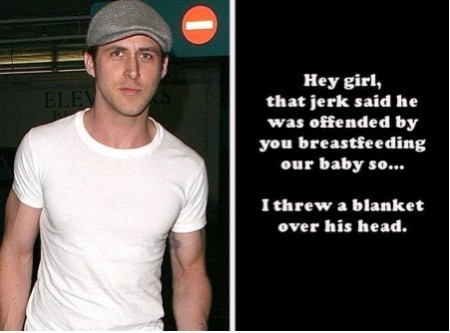 Can someone throw a blanket over Koch’s head on behalf of all breastfeeding mothers?

• Dr Lisa Schubert is a lecturer in nutrition in the School of Population Health at The University of Queensland. She is active in research investigating the social dimensions of nutrition, including breastfeeding.

PS from Croakey: And here’s an example from Pinterest of breastfeeding advocacy online. 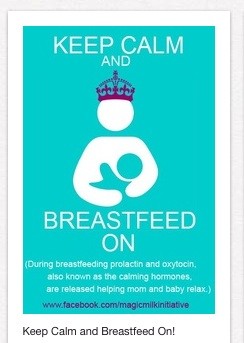