On Craig Kelly, misinformation and a view from the clinical frontlines

Introduction by Croakey: Liberal backbencher and prolific Facebook poster Craig Kelly continues to publish misinformation about public health issues, including COVID-19 and climate change, as well as to attack the ABC and others who question his claims.

On 8 February he posted about a BBC report on climate change that quoted Mark Carney, the United Nations envoy for climate action and finance and formerly Bank of England governor and the head of the Bank of Canada.

It’s just another scare campaign designed to hand more power to the global elites and the big wbankers [sic].”

Kelly’s page has almost 81,000 followers. While some commentators, including Michelle Grattan, have questioned whether his views on COVID-19 have much influence with the public, Dr Tim Senior, a general practitioner working in Aboriginal health in NSW, says Kelly’s actions are making the work of clinicians more difficult.

“Should I have the vaccine?”

Many of my patients have been asking this over the last few weeks. Lots of people want to have this discussion. One or two people have said they definitely don ‘t want it, mainly concerned about safety. Most people are up for a discussion, and expect me to know about the vaccine options.

I can have these discussions because it’s a basic part of the job of being a GP. Throughout the pandemic, we’ve had to keep up to date, for the public health prevention of social distancing, hand sanitisation, wearing masks.

We’ve had to keep abreast of public health orders, being careful in discussion of the most appropriate orders not to undermine public confidence.

We’ve prepared for conversations with our patients who have caught COVID – fortunately, not too often in Australia – about the best available treatment, and symptoms that suggest hospital care is needed. Our hospital colleagues have had these conversations with patients and their families.

We do this all the time, across many illnesses. Sitting with patients and their families, who feel unwell and vulnerable, we don’t have the opportunity of just making things up. We need the evidence about the safety and effectiveness of the treatments we offer to have discussions about these, to allow patients to make decisions for themselves.

In a sense, Prime Minister Scott Morrison is right when he says about Craig Kelly’s misinformation page on Facebook, “Craig Kelly is not my doctor, and he’s not yours” to Laura Tingle. Craig Kelly will never have to have these conversations or make these decisions.

But this is disingenuous. I am not Scott Morrison’s doctor either, and neither are many thousands of other doctors across Australia, but the information they give out is still trustworthy. This comment is the medical equivalent of “I don’t hold a hose, mate,” that only front-line individual interactions matter.

There’s a denial that policy matters, or even that there might be room for policy. (To be fair, this was Scott Morrison’s election platform, which can be summarised as “I drink beer and wear hats, not like those boring policy wonks on the other side.”) It’s not that they don’t do policy, it’s that this explicit lack of admitting to policy allows actual policies of climate inaction, decreasing social security and engaging in culture wars.

Which brings us back to Craig Kelly. Despite the reported “dressing down,” he’s still posting misinformation to Facebook, which the Prime Minister says is fine because it’s not about vaccination.

Craig Kelly doesn’t have to sit down with anyone worried about COVID. He will never have to provide advice, or discuss the pros and cons to someone about the risks of heart disease or their immunosuppression. He will never have to make a decision as to whether the evidence is strong enough to get a benefit from an intervention, knowing there will be risks.

None of these should be partisan right/left issues, or part of the culture wars. (I can’t really believe I even have to write a sentence like that!)

The discussions I have with my patients rely on trust. We have to trust that the ethical processes of research mean that studies are done fairly and written up accurately, and peer reviewed appropriately (not always the case!). We rely on the Therapeutic Goods Administration and Australian Technical Advisory Group on Immunisations to assess the evidence and make appropriate recommendations.

And, most visibly, we rely on politicians and the political system to make these decisions fairly for the common good. It is this that Craig Kelly undermines by spending his time posting misinformation. It is this that Scott Morrison undermines when he allows Kelly to continue posting it.

Courage in this case is not claiming Kelly’s right of free speech to say nonsensical things – any fool with a keyboard can do that. Courage would be to say it’s more important to have consistent public messaging about the evidence than it is to court the votes of those tempted by conspiracy theories.

Courage would be admitting to posting nonsense. And real courage would be the feeling of vulnerability that many patients and families feel in the face of COVID, and being able to sit and hear their fears, and answer their questions honestly.

I think it’s too much to hope for, though. Unlike health professionals, there’s no enforceable code of conduct for backbenchers, and the ministerial code of conduct never seems to be enforced. There’s no ethical expectation to “Do no harm.”

We’ll continue to do our work while Craig Kelly and the PM make it harder for all of us.

Dr Tim Senior is a GP working in NSW and a contributing editor at Croakey. Follow on Twitter: @timsenior

For further reading and analysis

• NPR: WHO Is Fighting False COVID Info On Social Media. How’s That Going? 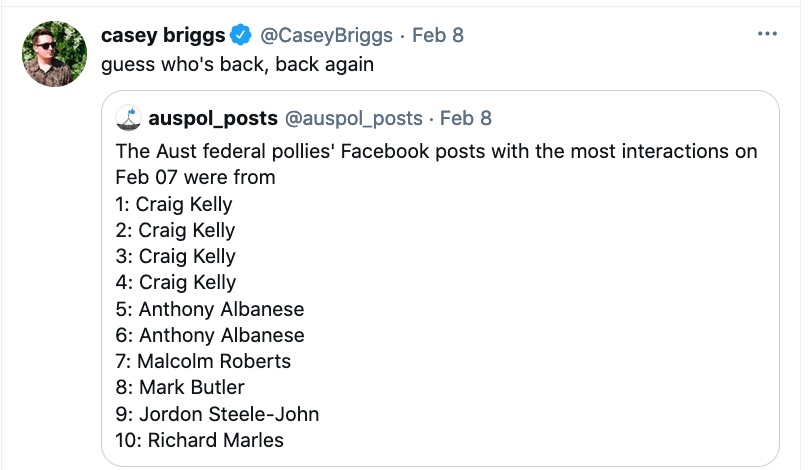