On election eve, some health matters for Queensland voters

Whatever the outcome of the Queensland election, the predicted large swing to Labor – and away from the austerity politics of the Liberal National Party – will have national ramifications.

That’s the asessement of sociologist and political analyst Dr Mark Bahnisch (who has also been tweeting for @WePublicHealth this week) in his election-eve wrap for The Monthly (also more from him at The Guardian  and on Radio National’s Late Night Live.)

For those Queenslanders whose vote may rest on health concerns, Croakey contributors were to address these questions:

What is your advice to voters at the forthcoming Queensland election?  What health issues should they consider when making their choice (you may wish to distinguish between public health and health service/system issues)?

Ginny Barbour, PLOS medicine editorial director
Voters should look for parties with policies that prioritise prevention of diseases and encouragement of healthy lifestyles and that don’t just focus on big ticket items such as expensive tertiary referral centres. Such policies need to look beyond the short term and include commitments to investing in urban and rural infrastructure that enable healthy living.

Amanda Lee, Professor, School of Public Health and Social Work & School of Exercise and Nutrition Sciences, QUT
The most important public health issue confronting Queensland is preventive health, which is critical to increase the sustainability of our current ‘ill-health’ system.

As AMAQ has also identified, addressing obesity is the health priority in Queensland. Poor diet, specifically, is now the number one preventable risk factor contributing to the burden of disease in Australia. It is the key driver of our spiralling rates of chronic disease, such as type 2 diabetes, cardiovascular disease and some cancers, and of the enormous treatment costs associated with these conditions.

Shortly after being elected in 2012, the Newman Government decimated preventive health throughout the state. This was done partly in an attempt to shift responsibilities to the Commonwealth; an attempt which failed miserably with the dismantling of the Australian National Preventive Health Agency and preventive health partnership funding by the Abbott government.

The 160 preventive health specialists who lost their jobs in Queensland were providing effective services. Their work had helped slow the increasing rate of obesity particularly among children, and increase intake of fruit and vegetables, breast feeding duration and physical activity participation throughout the state.

Queensland urgently needs reinstatement of these effective services and, most importantly, for this work to be supported by evidenced-based policy actions to improve our unhealthy, obesogenic environments to help ‘make the healthiest choices the easiest choices.’

They have a choice between a Premier who downgrades key prevention and community programs and thinks the only “frontline” health workers are those who spend 75% of their time with patients – and an Opposition leader who seems to think putting $1.4m over four years into two walking programs is a prevention policy.

Alison Verhoeven, AHHA
While there has been some discussion about improved waiting lists, funding for rural hospitals and staffing, much of the health debate during the Queensland election campaign has focused on Commonwealth issues such as co-payments.

The LNP has also committed to reducing waiting times for elective surgery through its Waiting Time Guarantee.

While the LNP has shied away from commentary on the copayments, the ALP has provided strong support for Medicare and bulkbilling.

While timely access to clinical care is important, getting the balance right between investment in acute care and investment in primary care, evidence-based prevention and early intervention programs is critical in order to maximise the health of the population and the sustainability of the healthcare system.

Whatever the outcome of the election, Queensland voters must hope that their next government will work effectively with the Commonwealth government, clinicians and consumers to ensure achievement of this balance.

Clive Aspin, a Maori health researcher and a Co-Director of ATRIO Consulting
When the Newman government came to power, they set about cutting funding to health services, including HIV services. Meanwhile, Queensland has seen significant increases in people testing positive for HIV, with this putting pressure on under resourced HIV services.

The incoming government needs to not only re-instate funding to HIV services but substantially increase funding to ensure adequate support for people living with HIV as well as prevention programs for people at risk of HIV. The Labor government has promised to do this if elected. The LNP would be well advised to do the same if re-elected.

Linda Shields, Professor of Nursing – Tropical Health, James Cook University
Ask if the targets are being met at all cost, in other words, at the expense of quality of care, with nurses being burnt out from having too many sick people being pushed through beds to meet the targets.

Nurses talk about three or four patients being admitted to one bed in one day – that means that patients will stay in one place for about four hours .

Public health nutritionst Dr Rosemary Stanton
I’d recommend Queensland voters consider the huge cuts that have occurred in health programs that were in place and which were helping to reduce risk factors for problems such as type 2 diabetes and obesity.

Ask your local MP if he/she will re-instate many of the valuable community health programs that were axed.

Peter Parry, child & adolescent psychiatrist, senior lecturer, University of Queensland
Voters in Qld should in my personal opinion reflect on the core issue in the 2014 public sector senior medical officers’ dispute with the current State Government.

While there were industrial issues (which the doctors gave some ground on), it was the serious undermining of the doctor-patient relationship that most upset the doctors.  The original contracts that were imposed upon senior medical officers put the doctors’ duty towards the “profitability” of the health system before the medical ethical imperative that doctors advocate for patient interests.  This was combined with removal of unfair dismissal protections.

The implication was that non-medical managers could effectively decide patient care decisions and doctors who protested on medical grounds could face dismissal.

The bitter protracted dispute led to the government backing down on these clauses.  That the government would act in this fashion is something voters should think about on polling day, many of us doctors certainly will be.

(Note from Croakey: For more on this issue, see The Guardian’s article quoting the Newman government’s former assistant health minister Dr Chris Davis, who said the LNP’s touted health policy achievements are a cover for privatisation which benefits party donors.)

• The Australian Health Promotion Association and the Qld branch of the PHAA have compiled an election overview and policy analysis.

• In a strong critique of the governance of the Newman Government, Tony Fitzgerald says: “The Government’s casual allocation of benefits to supporters and donors was unfortunately reflected in its cavalier attitude to donation laws and its blatant nepotism…”

• Fitzgerald’s concerns about the erosion of accountability, transparency and democracy in Queensland are shared by other prominent community leaders.

• Prominent Murri academic, community worker and advocate Professor Gracelyn Smallwood has criticised both major political parties in the run up to the state election.

• FARE on: How do the parties’ alcohol policies compare? 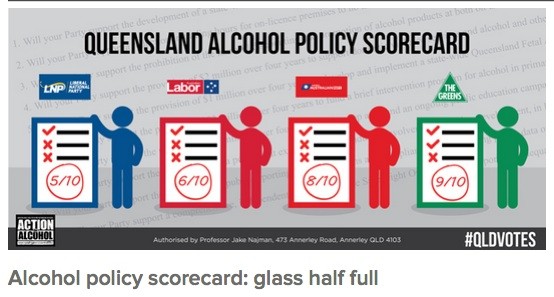 • Queensland Nurses’ Union statement: “All major political parties except the LNP have united to put Queensland patients and staff first this state election.” 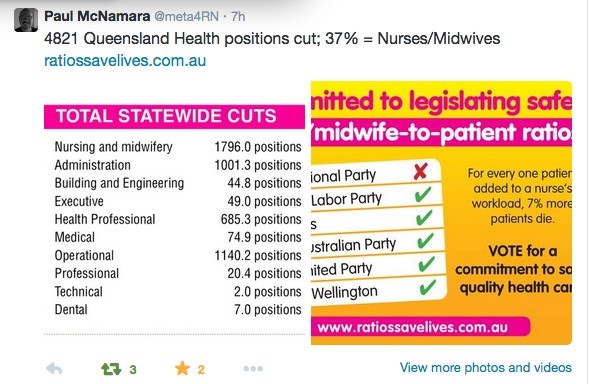 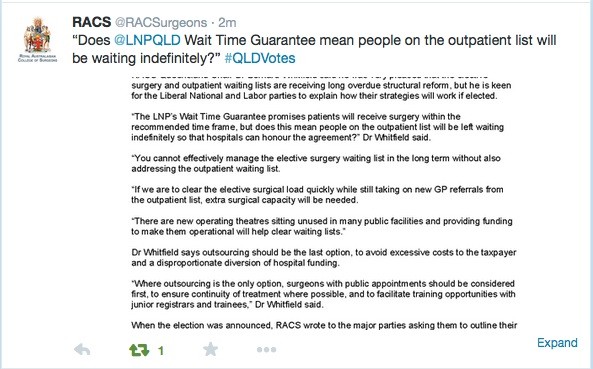 • Election analyses from media outlets, including ABC, The Guardian and the Brisbane Times.

Please add any other links to articles etc that may be of use/interest for Croakey readers in the comments section.

Mark Bahnisch concludes his article at The Monthly thus:

“A week that began with the roar of Greeks rejecting austerity politics may indeed end with an echo across Australia. How faint or how loud that echo will be is the question.”

***
You can track Croakey’s coverage of the Queensland election here.