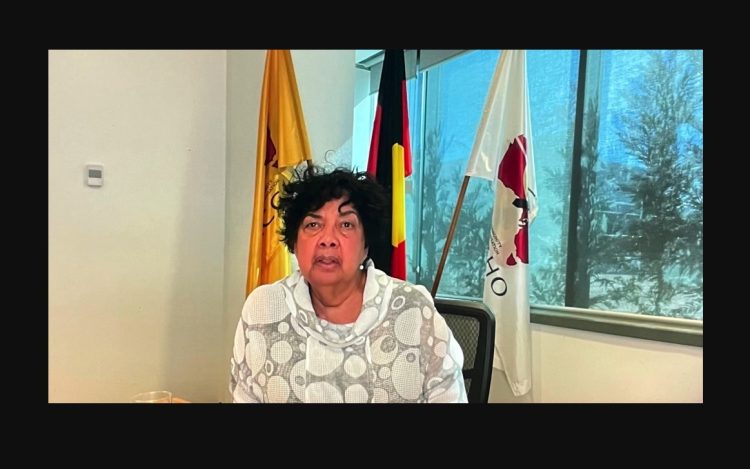 In her acceptance speech, published below, Casey describes the “boom and bust” history of policy affecting Aboriginal and Torres Strait Islander people, the leadership provided by the commununity-controlled sector, and the imperative for comprehensive primary healthcare to address poverty and other social determinants of health.

She also outlines the sector’s “strong and proactive” role in the pandemic response, enabled by its “longevity, connectedness and resilience”.

I’ll begin by acknowledging the traditional custodians of the Ngunnawal Namburi country where I am today. I am a Tagalaka Traditional Owner from North Queensland and I pay my respects to Elders past, present and emerging; and thank them for their continuing efforts in protecting and nurturing our land and culture.

To everyone joining this award session today, wherever you are, let’s take a moment together and acknowledge the rich heritage of where we live, work and gather.

I am deeply honoured to be given this award.

Sidney Sax occupied a unique niche in the Australian Health Care System from 1973 to the late 1980s. This was a period of transformational change at the Commonwealth Government level and it would be of no surprise that Sidney Sax was a trusted adviser of the Whitlam, Fraser and Hawke governments.

In his review of Sidney Sax’s book, “Health Care Choices and the Public Purse”, R M Douglas notes that the book begins with two assumptions: that society has responsibilities for those who are sick and disabled, and that modern civilisation creates or contributes to many problems that are beyond our capacity to solve as individuals or through our families.

He warns against another dismantling of universal health insurance. He believes that the experience between 1976 and 1983 is a warning to ever committed libertarians, and that the strife engendered, and the associated system disruptions would be intolerable by both consumers and the majority of healthcare providers.

Sax did not think we had much to learn from the Americans. He thought that the chances of achieving an efficiently integrated system would be greatly improved by removing the division of responsibility between Commonwealth and State governments and I couldn’t agree more. He did warn not to holds one’s breath while waiting for this to occur.

It is interesting to note that it took decades for governments to progress many of the areas Sax had identified for action. But for me this is not new. There were many gains made in the eighties that were lost in the following decade.

Buoyed by the Whitlam Government’s transformative legislative reforms, particularly the Racial Discrimination Act 1975 (Cth) and the development of the Northern Territory Land Rights Bill subsequently enacted by Fraser’s conservative government, our Aboriginal and Torres Strait Islander peoples were optimistic of furthering the pursuit of recognition and self-determination into the eighties.

The outcomes our Indigenous peoples were seeking were aligned; recognition through national land rights, a treaty and formal structures that would ensure Indigenous people had direct access to government and the leadership in the development and implementation of policies and programs.

However, the widely held descriptions of the eighties being the decade of boom and bust also held true for Indigenous affairs. The capriciousness of Australian politics continued the dispossession of our Aboriginal and Torres Strait Islander peoples.

The state of mind of Aboriginal and Torres Strait Islander peoples went from one of elation to feelings of utter betrayal by the then Labor Government. Hawke’s commitment to negotiate a treaty was reduced to a process of reconciliation and national land rights legislation was abandoned. This was followed by the Howard’s Government decision to dismantle ATSIC.

While Sax was pursuing the reduction of socioeconomic inequalities and increased emphasis on the management of chronic disease, Aboriginal and Torres Strait Islanders were establishing NAIHO which is now known as NACCHO and our first Aboriginal Community Controlled Health Service, the Redfern Aboriginal Medical Service which is celebrating its fiftieth anniversary this year.

Both the need and the strong desire by our Aboriginal and Torres Strait Islander peoples to pursue culturally safe healthcare for our communities has resulted in there being some 143 Aboriginal and Torres Strait Islander Community Controlled health services across Australia delivering around three million episodes of care per year through 550 clinics and outreach services.

Our sector is the third largest employer of Aboriginal and Torres Strait Islander peoples.

In my view it is this longevity, connectedness and resilience that has enabled the strong and proactive response to the COVID-19 pandemic.

Australia’s COVID-19 story is one you might know well. However, you may not know the full story of the community-controlled sector’s response.

Our sector mobilised quickly. Because we knew we had to.

Already in January 2020, Apunipima in Northern Queensland was preparing a response to protect Aboriginal and Torres Strait islander peoples in that region.

In early March, at NACCHO, we convened a meeting in Canberra which included CEOs and Aboriginal Doctors from several of our Community Controlled Health Services, Affiliate CEOS and Public Health Medical Officers to get our heads around this new virus.

The Commonwealth joined this meeting and subsequently established the Aboriginal and Torres Strait Islander Advisory Group on COVID-19 and included State and Territory government officials. As Deputy CEO of NACCHO, I continue to co-chair this Advisory Group with Dr Lucas de Toca from the Commonwealth Department of Health. It links to the Communicable Diseases Network of Australia and reports to the Australian Health Protection Principal Committee.

From that day to this, the sector was out on the ground informing communities about the facts.

We advocated early with the Territory Land Councils for border closures and protective biosecurity measures to keep our communities safe.

Working out how to get medications to people in quarantine, and we introduced daily health monitoring systems for anyone at high risk.

While the sector was busy responding on the ground, we were also front-and-centre in national pandemic policy. Our sector ensured:

This was a fantastic effort and it worked.

In 2021, however, a new variant of COVID-19 and the deeply embedded social determinants of health have taken their toll. This year, there have been four Aboriginal people that we are aware of who have died because of COVID. Notwithstanding this battle against the COVID pandemic, now in its eighteenth month, our sector continues to deal with the challenges thrown at us.

The most significant enabler in our response nationally has been the recognition by the Commonwealth Government of the Aboriginal Community Controlled Health Sector as a key plank in the health architecture of Australia delivering primary healthcare and in particular for the response to COVID.

The Government is allocating vaccines direct to our Aboriginal Health Services and at the last count, 177 clinics in the sector were delivering the vaccine across the country and had ordered over 300,000 doses of vaccine since the start of the rollout.

As of 13 September 2021, 131,092 (22.18%) Aboriginal and Torres Strait Islander people are fully vaccinated and in excess of $29m has been provided to NACCHO to fund ACCHOs and other Indigenous organisations to assist them with the response and vaccine roll out.

What is important however, is it was granted in a way that allowed flexibility thereby enabling the programs to be designed to meet the needs of the community at the local level.

This partnership with Government must continue if Australia is to reduce the burden of disease for Indigenous Australians, which is 2.3 times that of other Australians and in remote areas six times.

We can’t rely on the whim of whoever is in government and individuals, and to this end NACCHO and other members of the Coalition of Peak Indigenous Organisations will assiduously pursue the implementation of the National Agreement on Closing the Gap. And how can we not, given the challenges we still face.

Cancer is now the leading cause of death for Aboriginal and Torres Strait Islander peoples. We have a higher rate of cancer diagnosis and are approximately 40 percent more likely to die from cancer than non-Indigenous Australians.

Other significant challenges for our sector in meeting the health needs of Aboriginal and Torres Strait Islander peoples include mental health and suicide, road safety fatalities and non-communicable diseases like heart disease.

Mental health and suicide affects us everyday. Eleven percent of presentations at emergency departments across the country are Aboriginal and Torres Strait Islander people yet we are only three percent of the population. And in 2010, suicide was 2.6 times more likely to be the cause of death than for non-Indigenous Australians. It is significantly higher for males under 25 years of age.

The number of Aboriginal and Torres Strait Islander people involved in road accidents and fatalities is disproportionately high. We are 2.7 times more likely to die, and 1.4 times more likely to suffer serious injury because of a motor vehicle crash compared to other Australians.

We are delivering primary healthcare that others only dream of.

Continuity of care in community-controlled services decreases rates of hospitalization. Communities direct us. Communities trust us.

Very recently, a planned transition of a remote primary healthcare service from government management to community control increased utilisation of primary healthcare by 408 percent. This transition accelerated immunisation rates. It reduced the proportion of low-birth weight babies to less than 10 percent of the entire birth cohort. It increased employment of qualified Aboriginal and Torres Strait Islander people.

To wrap up, I will finish with a few words that I have heard about Dr Sidney Sax.

It was said that behind his unassuming manner lay a ‘fierce radical’.

With foresight, he identified the need for strategic action on:

He recognised that considerable effort is required to bring everyone together to row in the same direction for the public’s health.

In accepting this Sidney Sax medal, I would like to recognise the amazing work of the Aboriginal and Torres Strait peoples past and present who are part of our community-controlled health sector. Our services were established out of a need for our people to have not only access to healthcare but also care that is culturally safe. Our sector is fiercely radical too. Our model is an act of self-determination.

One of the participants at a recent consultation session on the development of a core services framework, which articulates our model of comprehensive primary health stated:

To call yourself a comprehensive primary healthcare service, you need more than a ‘sick care service’.

You also need to be public health advocates to garner action on poverty and overcrowding. You must invest in communities, develop leaders and reclaim community empowerment, you must look to act on social determinants of health as well.”

• See the list of other award winners announced at the conference. 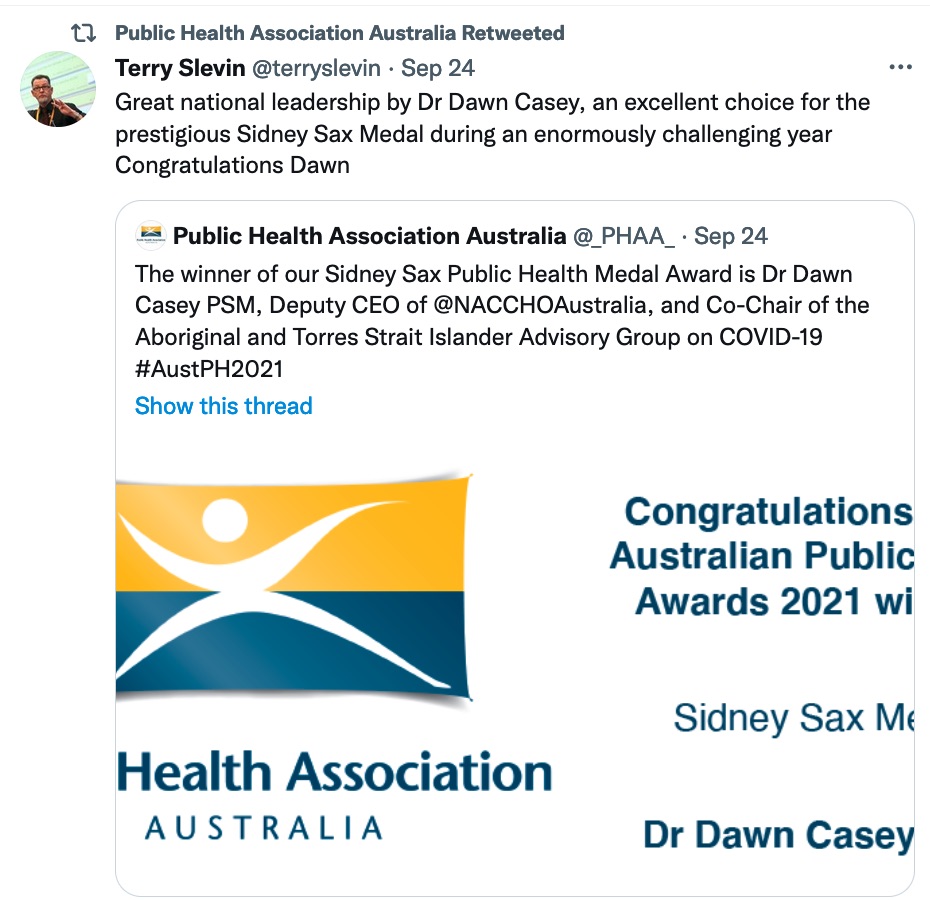