On health reform in England, and Mr Magoo

(Update on March 1: Links to more reading have been added to the bottom of the post).

Huge amounts of media space are being consumed by furore over the NHS reforms in England (though I haven’t seen much coverage in Australia).

According to the official summary of The Health and Social Care Bill 2010-12, the reforms will create an independent NHS Board, promote patient choice, and reduce NHS administration costs, by:

• increasing GPs’ powers to commission services on behalf of their patients

• strengthening the role of the Care Quality Commission

• developing Monitor, the body that currently regulates NHS foundation trusts, into an economic regulator to oversee aspects of access and competition in the NHS

• cutting the number of health bodies to help meet the Government’s commitment to cut NHS administration costs by a third, including abolishing Primary Care Trusts and Strategic Health Authorities.

You can get some sense of the extent of  concerns from this recent joint editorial by the editors of the BMJ, Health Service Journal, and Nursing Times, describing the reforms as divisive and destructive. The resulting upheaval “has been unnecessary, poorly conceived, badly communicated, and a dangerous distraction at a time when the NHS is required to make unprecedented savings”.

“Worse, it has destabilised and damaged one of this country’s greatest achievements: a system that embodies social justice and has delivered widespread patient satisfaction, public support, and value for money. We must make sure that nothing like this ever happens again.”

The editors say a lesson from “this debacle” is that sustainable reform requires politicians to be clear about the problem they are trying to solve: “A recurrent and justified criticism of these changes has been their failure to express a clear rationale. We also need clarity on the methods proposed to solve the problem.”

Meanwhile, Australian health policy expert Professor Stephen Leeder writes below that he has been reminded of the cartoon world of Mr Magoo. 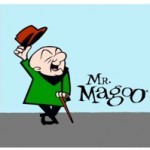 I am old enough to remember cartoons of Mr Magoo, the endearing short-sighted and well-intentioned buffoon who (if it had been possible) would have driven his car over the arch of the Sydney Harbour Bridge rather than use the roadway.  Always his adventures ended with him chortling in mock triumph, “You’ve done it again, Magoo!”

There is a story of an older man driving on the wrong side of a freeway, observed by a news helicopter that transmitted the message to radio and, freakishly, the man’s wife heard it and phoned him. “There’s a person driving down the wrong side of the freeway!” she told him. “That’s true!” he replied, “But there’s more than one of them!”

The British prime minister, Mr David Cameron, ably assisted by his health secretary  Mr Andrew Lansley, are of the Magoo mould. They have proposed legislation radically changing the English (not Welsh, Northern Ireland or Scottish) NHS.

The Bill, which emphasises enhanced privatised competition in the search for efficiency, is now ringing alarm bells everywhere.  Most of the royal colleges are up in arms about it, calling for its rejection in the House of Lords.

“In spite of being offered £60bn of public funds, GPs have voted against the reforms,” writes Philip Stephens in the Financial Times.

The enabling document runs to several hundred pages and many able minds have wilted trying to understand it, including that of the notable commentator Martin McKee from the London School of Hygiene.  On balance, McKee thinks the legislation is a disaster.  The politics are convoluted. Mr Cameron and his minister appear to driving on, despite the flow of oncoming traffic.

More from the 13 February edition of the Financial Times (hardly a Fabian tract):

“Good policy can make for bad politics. Useful reforms often invite short-term unpopularity. Sometimes the dynamics are the other way round. Bad policy courts instant popular acclaim…David Cameron and Nick Clegg have pulled off a rare feat. The coalition government’s National Health Service reforms unite bad policy with worse politics. They foreshadow a costly bureaucratic upheaval and the fragmentation of health provision. They also promise to bury Mr Cameron’s political ambition to prove the Tories can be trusted with the NHS.

When Mr Lansley first unveiled his plan he failed to address a basic question: what was the problem this bureaucratic convulsion was designed to solve? The question still remains unanswered. The health secretary admits he could have achieved 90 per cent of his objectives without any legislation.

During the next few weeks the legislation will suffer a mauling in the House of Lords. Andrew Lansley [the health minister] has been obliged to submit more than 100 amendments to his own bill. Many more changes will be voted through against the health secretary’s wishes. Mr Cameron, though, is battening down the hatches. Downing Street’s calculation is that once the bill becomes law – albeit in emasculated form – the fuss will die down. The prime minister is making a mistake. The real problems will start with implementation.

The NHS needs modernising. A bigger say for clinicians, local accountability and more choice are among the things that would make it more responsive to patients. Britain should be spending more on primary care and less on hospital beds. It needs fewer general hospitals and more centres of specialist excellence. Health and social provision require seamless integration. There is a place for competition.

Some of these elements are found in Mr Lansley’s blueprint. They are buried, though, in the organisational upheaval.”

What a mess, Magoo!  As Hillary Clinton discovered, and Barack Obama rediscovered, it is easy to stir the bees with serious health reform proposals.  Stings are plentiful and the honey is scarce.

• Stephen Leeder is Director of the Menzies Centre for Health Policy at the University of Sydney and Chair of the Western Sydney Local Health District. He has a new Better Health blog, and will likely be writing more on the NHS reforms there.

• Which health and medical organisations support the reforms? Not many, concludes this analysis by a Fact Checking Project of Channel 4 News.

• A tongue in cheek guide to understanding the terminology of the reforms (perhaps equally useful for understanding health reform jargon in Australia?)  The definition of Outcomes, for example, is: (collective noun) greater profits for private health providers.

• A damning analysis in The Guardian which says: “NHS services are being withdrawn in an unannounced, piecemeal and unaccountable way.”

• A former chief executive of the NHS calls the reforms “a mess”, reports The Independent.

PrevPreviousRestructuring of Queensland Health: a step in the right direction
NextA survey on workplace safety that may be of interest to health professionals, teachers and police officers working in rural and remote areasNext