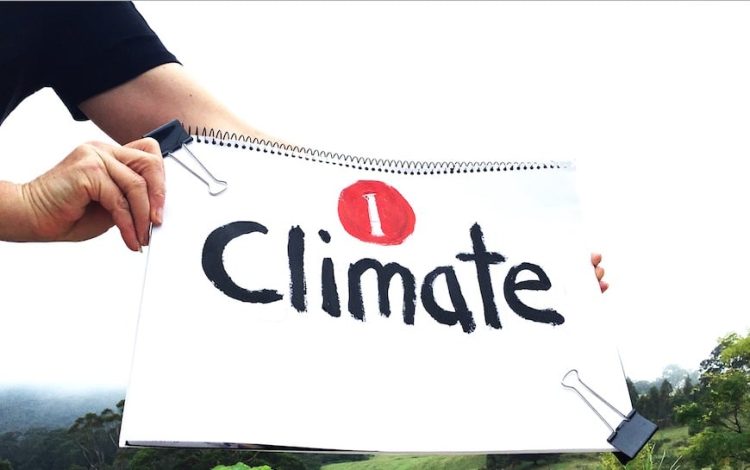 Finishing 2017 with a focus on climate and health

The wide-ranging health impacts of climate change – including increases in heat-related deaths and increased health costs – are acknowledged in the ALP’s Climate Action Plan, released today.

The plan (covered by Fairfax and at The Conversation, and welcomed by the Business Council of Australia) includes an emissions trading scheme, and commitments to a 45 per cent emissions reduction on 2005 levels by 2030, and to renewables supplying 50 per cent of electricity by then.

Read the analysis and reactions below.

Welcome, but more needed
Statement by the Doctors for the Environment Australia (DEA)

DEA welcomes Labor’s policy to tackle climate change, but urge more robust action to reduce the numbers of Australians who are likely to get sick and to die as a result of rising temperatures.

The Labor policy is a step in the right direction and is better than anything we have on the table right now. DEA applauds the commitment to the Renewable Energy Target of 50% by 2030, which will both reduce green house emissions and the air pollution that damages the health of thousands of Australians by facilitating the transition from coal.

It also supports the Federal Fund to assist communities in the transition from coal to clean energy. The Fund will help prevent the health hazards of unemployment, as well as provide important expertise to states which have lacked the know-how to manage the transition to a renewable economy.

However DEA laments Labor’s policies make no mention that new coalmines will not be approved.

Coal is a major contributor to climate change, whose effects we are already seeing through extreme weather events such as heat waves and devastating bushfires. Pollution from coal burning causes cardiovascular, respiratory and neurological diseases, as well as lung cancers and contributes to the reduced life expectancy of residents in coal-producing areas.

Furthermore Labor’s policies ignore the increasing emissions from unconventional gas developments.  The methane released from these methods is a potent greenhouse gas with many times the global warming impact of carbon dioxide.  Many of the toxic substances used in the mining process are unknown and studies overseas suggest there are possible health repercussions on communities near these mines.

“The health impacts of climate change are already evident, and will increasingly be felt in GP surgeries and emergency rooms across the nation,” says DEA spokesperson Dr David Shearman.

“Higher temperatures will increase emergency department attendances for heart attacks in adults, and fever, gastroenteritis, and asthma in children .”

DEA warns that even at an additional 0.85 degrees of average warming — where we are today — our health systems are being tested.  In the Queensland floods of 2011, over 17,000 tetanus/diphtheria vaccines were distributed to reduce the risk of disease and Queensland Health information line answered 54,881 calls from flood-affected areas.

“Climate change poses a real and significant threat to our health. If climate change is not controlled, it may well wipe out many of the medical advances the world has seen in the last 100 years.

“We call on our elected representatives at this crucial point of history to treat climate change with the seriousness it deserves. Gambling with our health is unconscionable.” 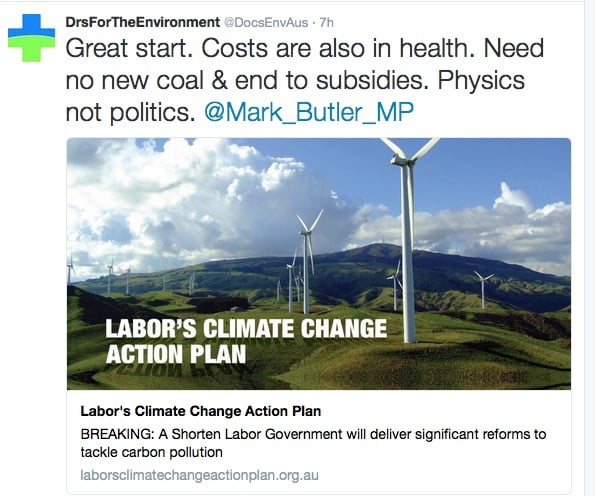 The emission reduction targets and the focus on a more orderly transition to clean energy announced by the ALP today are important steps towards credible climate policy, said The Climate Institute.

“The ALP’s stronger pollution reduction commitments would set Australia on a path toward the internationally agreed and bipartisan supported goal to limit global warming to 1.5-2°C,” said John Connor, CEO of The Climate Institute.

In its ‘Climate Change Action Plan’ the ALP has committed to reduce Australia’s net emissions by 45 per cent below 2005 levels by 2030 and to zero by 2050. The government aims for only a 26-28 per cent reduction by 2030 and, though it backs the objective, is yet to set a timeline to achieve net zero emissions.

The Climate Change Authority recommended a 45-65 per cent reduction of 2005 emissions by 2030 for Australia to help avoid 2°C warming. But the commitment by Australia and other countries in Paris to pursue efforts to avoid 1.5°C warming means 45 per cent is the floor, not the ceiling, of credibility.

”Our emissions are increasing, clean energy investment is struggling and our power sector is dominated by an ageing coal-burning power fleet. If we don’t start catching up, the need for more dramatic action will become more and more likely.”

Recent analysis of policies for the electricity sector by The Climate Institute found that continuing weak action now increases the risk of shocks to prices, jobs and energy security. These could be avoided with an earlier and more orderly transition from coal power to clean energy.

“We need a policy package that replaces high-polluting coal power with clean energy, and supports communities and workers through this transition. The ALP’s policy takes an important step in this direction,” Connor said.

“For this transition to be consistent with our climate commitments, all existing coal burning power stations need to be replaced with clean energy over the next 20 years.”

Connor said The Climate Institute welcomed the ALP’s recognition that carbon pricing is a necessary but not sufficient part of the policy toolbox.

“Over the next 18 months, both the government and the ALP are setting up reviews to integrate climate and energy policies. The ALP’s plan is an advance over existing policies, but is far from complete. The government is yet to develop a plan to clean up the electricity sector and meet its Paris commitments to limiting warming to 1.5-2°C,” he said.

“Without a credible plan for net zero emissions Australia doesn’t have a plan for the future, both major parties have much more to do, but the ALP has taken important steps today.”

Coalition’s scare campaign is not credible

This must-read from Lenore Taylor at The Guardian, critiques the Government’s attacks on the policy, and includes this memorable concluding punch:

And the barren, stupid climate wars and dumb fact-free scare campaigns are a guaranteed recipe for a terrible economic and environmental failure.

“The recent signing of the Paris CoP agreement in New York was backed by calls for more rapid and concerted action to reduce damaging climate change. Labor has responded by proposing a much-needed acceleration of Australia’s emissions reductions to 45 per cent by 2030 via two essential mechanisms: placing a price on carbon through an Emissions Trading Scheme (ETS), and regulating to achieve 50 per cent renewable electricity by 2030.

However, unless there is bipartisan support for an ETS and for renewables, then this certainty will be thrown into disarray. The Coalition and Labor need to work together – not in opposition – otherwise Australia faces international isolation and economic disadvantage by being left behind in this global challenge.”

“The Labor Party climate change action plan provides a comprehensive approach to reducing greenhouse gas emissions so that Australia can play a significant role in meeting the global targets agreed in Paris in December last year.

But Labor’s plan is completely absent of any elements on adaptation – it has only one side of the climate change equation. Climate adaptation is another string to the innovation bow and it will bring major economic, social and environmental advantages if done well.

To acknowledge the need for climate adaptation does not undermine the positive options in Labor’s Plan for reducing emissions. It is simply a practical and pragmatic response to the realities of change as it unfolds.

A comprehensive climate change plan that delivers fully to the national interest will have both sides of the climate change equation: emission reduction and adaptation.”

“Labor has provided a comprehensive statement of policy intent. There is now a chance for a serious contest of ideas and proposals, with quite some detail on the table early in the election campaign. Let’s hope that climate change policy will stop being a political football between the two major parties.

The plan’s focus on electricity sector transition is well taken. At ANU we have contributed to this debate, and our proposal for a market-based mechanism for exit of coal-fired power stations is taken up in the policy.

Fifty per cent renewables by 2030 is possible but would require massive investment. The big open question is what a Labor government would do to get there. This would be left for a review. The government has also announced a climate change policy review for 2017 – perhaps another sign of a gradual convergence at least on some issues.”

The plan includes some fresh thinking, such as the idea for an industry-funded mechanism for the retirement of existing coal-fired generators.

Labor has signalled that their approach would have a quite heavy reliance on emissions offsets, both international and local. There is a good reason why offsets are cheap: they can be of low quality. It would be preferable to move to a system with a more limited role for offsets.

Australia’s climate policy has been politicised and messy. Hopefully a transition to emissions trading is an idea that can win support from all sides of politics.”

“The electricity sector is properly the main focus since it is the largest emissions sector – and will grow to 60 per cent of emissions as cars are electrified and gas heating is displaced by electric-driven heat pumps. Wind and photovoltaics (PV) constitute one quarter each of new generation capacity installed worldwide each year, and constitute all new Australian generation capacity. Costs are now the same as for new-build gas and coal power stations.

The ALP goal of 50 per cent renewable electricity by 2030 is unambitious – current deployment rates of about one gigawatt (GW) per year each of wind and photovoltaics gets us there. Doubling the current deployment rate to two GW per year each gets us to 80 per cent renewable electricity – and a halving of total greenhouse gas emissions.