On our doorstep: the health crisis in PNG

(Update: you can now watch his presentation here).

Macdonald, a GP, described the work of an organisation he founded in 2000, Australian Doctors International,  in providing health care to some of the most remote parts of PNG.

As he reminded us, PNG is our nearest neighbour – being only five kilometres from the closest Australian territory – and yet many of its people suffer appalling health problems and lack access to the most basic of services.

He showed a distressing series of photos of patients with leprosy, TB, typhoid, and terrible burns, and described the difficulty of sourcing drugs and treatments.

“Our doctors and health workers are seeing leprosy in children as young as five but we can’t get access to drugs,” he said.

“All the indicators are appalling from infant mortality through to maternal mortality. Malaria is rife. TB is out of control, particularly multiple drug resistant TB, and also HIV is the highest rate in the Pacific.”

ADI volunteers were finding up to eight cases of leprosy per patrol in remote parts of PNG’s western province, he added.

ADI recruits volunteer doctors and health service managers to go on “supervised integrated health patrols” into remote areas for three to four weeks at a time.

These involve gruelling treks, long journeys by boats, and being dropped into remote areas by helicopters. Often the volunteers are working in rain and muddy conditions, and subsisting on sago.

Interestingly, women account for about three-quarters of the doctors who volunteer with ADI. Most have general practice backgrounds. They need to be fit.

Macdonald said PNG’s health services were crippled by corruption at all levels of government: local, provincial and national. Many health facilities were decrepit, had no power, staff morale was at rock bottom and staff were often not paid.

To date, ADI has mainly worked in the Western Province but is about to expand its operations into the New Ireland Province. ADI also services thousands of West Papuan refugees who receive little or no PNG government assistance.

Macdonald said that many people from the South Fly area in the Western Province, where there were no doctors at all for 60,000 people, travel to the Torres Strait Islands to access health services.

He is frustrated by the lack of Australian Government support for ADI’s work.

“We’ve had no support from the Australian Government although we’ve met them on a number of times,” he said, later adding that it was “nothing short of a scandal how AusAid distributes its money”.

Macdonald clearly is putting his political retirement to good use. As well as his overseas work, he is contracted to the Northern Territory Department of Health to provide locum medical services to remote Indigenous communities. 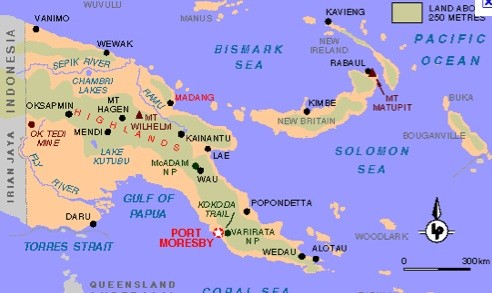 PrevPreviousWhat do you want to know about rural health?
NextAre “experts” part of the problem when it comes to breastfeeding?Next