On #QldVotes and a shrinking public health sector

The World Health Organization has urged nations to strengthen the capacity of their public health workforces, as one of a raft of recommendations aimed at reducing the toll of noncommunicable diseases.

However, the recommendation, in the WHO’s latest report on noncommunicable diseases, must sound rather hollow for those who have followed the shrinkage of the public health sector in Queensland in recent years.

As Queenslanders head to the polls, it is timely to reflect upon “the current perilous state of public health and prevention”, says Dr Helen Vidgen, National Co-convenor of the Public Health Association of Australia’s Food and Nutrition Special Interest Group, and a former Director of Public Health Nutrition in Queensland Health.

(Note: for an interesting critique of the WHO report, see this article by US public health nutritionist Professor Marion Nestle looking at what’s missing from the nine voluntary global targets, as reproduced at the bottom of this post).

The election of Campbell Newman’s Government in Queensland in 2012 led to what one public health expert described at the time as “the greatest dismantling of public and preventative health services in recent Australian history”.

Since then, we’ve also seen a significant dismantling of public and preventative health efforts nationally, under the direction of the Federal Abbott Government. Of particular concern is the demise of the National Partnership Agreement on Preventative Health, together with the closure of Australian National Preventative Health Agency.

As Queenslanders head to the polls again, it is timely to reflect upon the current perilous state of public health and prevention.

The LNP slashed the state-funded public health nutrition workforce in Queensland, in the face of strong opposition from public health experts.

A study reported last year that there was round a 90% reduction in the state-funded nutrition prevention workforce between 2009 and 2013, from around 137 to just 14.  Most significantly, all Aboriginal and Torres Strait Islander nutrition positions and regional workforce were lost. These Health workers reached communities around the State and responded to local needs.

In addition, there has been a disinvestment in the work itself, which included work with local groups and communities to support healthy eating such as working with local stores in remote communities to improve the availability of fresh fruit and vegetables, and state-wide and national work such as monitoring and surveillance of food systems and eating habits and expert advice on the nutrition implications of changes to food law.

The absence of this work is unlikely to be felt within a 3-year political term, but has important implications for health beyond this.

In a presentation at the Health Media Club in 2013, Health Minister Lawrence Springborg stated that this work would be picked up by other sectors. However, two years later there is little evidence that this has or can happen in the absence of government funding.

The National Health and Hospitals Reform recommendations, which both levels of government refer to as the reason for this disinvestment, identifies prevention as a priority across the health continuum, but in reality it is no-one’s as federal and state governments shift responsibility to each other.

For the first time, diet is now the leading risk factor contributing to Australia’s Burden of Disease.

The recent Queensland Plan and Queensland Chief Health Officer’s report identify nutrition and overweight and obesity as a priority health issue for Queenslanders.

So far, the Queensland Department of Health’s response to this plan predominantly lists projects that were funded by the now defunct National Partnership Agreement on Preventative Health. There is little evidence of new money or state specific money going to address this priority health issue.

A letter from my local LNP member this week stated that the LNP will employ an extra 464 health practitioners if elected.

It is unclear who these people will be and what aspect of health they will be contributing towards.  However, re-investment in a qualified nutrition workforce focusing on prevention would appear to be a healthy choice.

***
You can track Croakey’s coverage of the Queensland election here.

From the WHO Global Status Report on Noncommunicable diseases 2014: 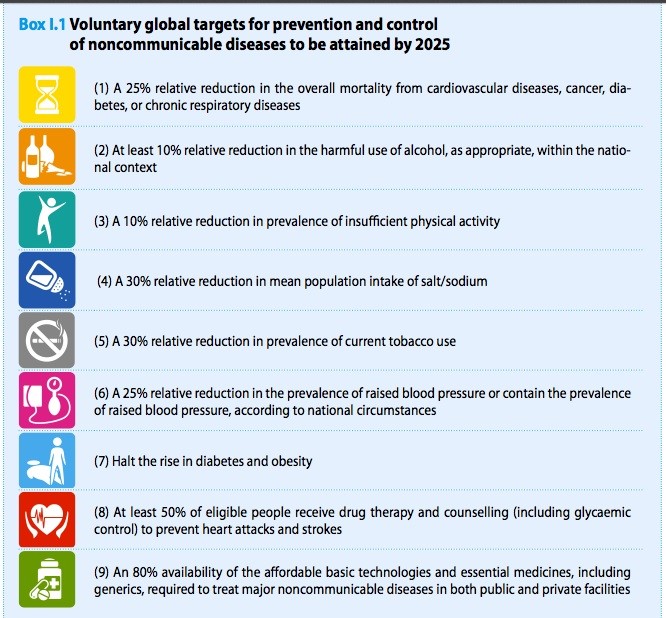 PrevPreviousA refresher course: why health reform is needed (attention: Minister Ley)
NextDeclaring a Day of #CroakeyThanks – readership grew in 2014Next