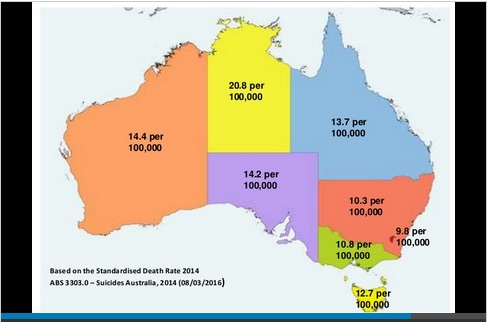 On the complexities and challenges of communications around suicide deaths

Over the last decade, there has been a profound shift in how the statistics about suicide deaths are reported, according to Marc Bryant, Manager of the Mindframe National Media Initiative at the Hunter Institute of Mental Health.

In the wake of this week’s release of the latest national data on suicide deaths (summarised here), he examines some of the complexities confronting those involved in communications in this space, whether in advocacy, journalism or wider public debate.

On Tuesday 8th March at 11.30am the Australian Bureau of Statistics (ABS) released the ABS Causes of death data for 2014. This includes data for suicide deaths.

At 11.31 am a team of staff based at the Hunter Institute of Mental Health were working on the data, to analyse the trends as quickly as possible to support accurate information getting to the media and the suicide prevention sector, under the Mindframe National Media Initiative.

At 11.35 am a first ‘dial-in’ teleconference briefing for media was held and at 11.50am, a more detailed briefing and discussion with communication leads for health, mental health and suicide prevention organisations commenced.

A decade ago, the ABS would release the suicide deaths data with relatively little attention from either the media or the sector. This was probably due in part to the fact that at that time official suicide rates were coming down and generally “good news is not news.”

The Mindframe team would work over the next 24-48 hours to review the statistics and update information on the website to ensure media had access to the most up-to-date figures to assist them with the recommendation to “ensure accuracy.”

Fast-forward a decade, the issue of suicide is one with which the community is engaged and which media report on regularly. Our news-cycle is now 24/7, digital and fast – with a thirst for information as it comes to hand, rather than waiting for the evening news or tomorrow’s edition of the paper.

In addition, our major mental health and suicide prevention organisations now have at least one communication professional (many have large media and communication teams) to help generate and respond to media.

As a national program tasked to work with the media and the mental health and suicide prevention sectors about the way we report and portray suicide and mental illness, we can no longer wait 24 to 48 hours to respond to new information.

Whilst Mindframe’s core business remains the development and dissemination of evidence-based resources, supported by education and training and building partnerships across sectors, it has been increasingly called on to proactively support emerging national and regional issues behind the scenes.

Working with national advisory groups, there has been an increasing request for the program to be proactive with its communications, especially in relation to big national and global events (such as the death of a celebrity) as well as the release of new information – including coronial recommendations and new statistics.

This can include briefing journalists and editors, sending reminders via email and social media about recommendations for reporting suicide and providing lists to supporting resources (including those in the sector that may be able to assist with comments and the best support services to add to articles and programs).

It also means often being available after hours and on the weekend when news stories break, to try and get reminders to journalists through social media. In fact, 2014 (the year of the current statistics release) was a particularly important one with some high profile celebrity suicides – including the death of Robin William, which was leading news globally, with impacts felt here in Australia.

Ultimately, the role of Mindframe is to remind all of those involved in communicating about suicide of the best way to limit risk to those vulnerable to suicide, while reporting on a specific case of suicide or reporting (or advocating) for the issue more broadly.

Reminding people of the recommendations at the point of increased activity is an important way to reinforce the ongoing and more long-term approaches taken by the program.

The ABS release this year came at a time when the suicide prevention sector (and the community) is disappointed, and at times angry, about the speed of promised reforms to the way suicide prevention is funded and coordinated. They also came at a time when many communities have been devastated by the impact of suicide, including the reported death of a 10-year-old girl in the Kimberley and concerns about the rates of suicide in men of working age. 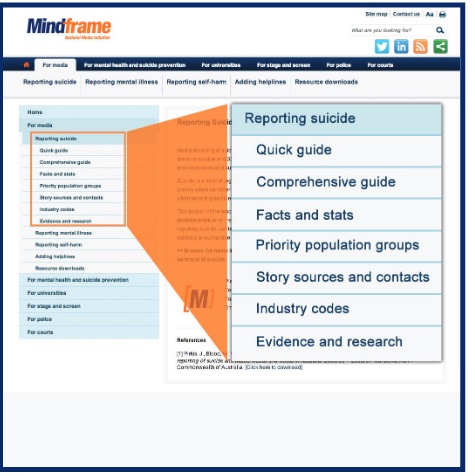 For the most part, media are doing their job in a very emotionally charged environment. They are covering the issue, but generally removing the things that are been most associated with increased risk – including details about method of suicide and the inclusion of help-seeking information to almost every story filed.

It should be noted that for 18 years, Australia has provided education and training for the media via Mindframe, a world leading initiative highlighted in 2014 by the World Health Organization. An independent media monitoring study released in 2010 showed major improvements in Australian media in terms of quality as well as a two fold increase in the number of reports.

But it is also a challenging time for journalists, who want to cover the issue well but who are responding to, and working with, a sector that is frustrated and angry. As part of the sector ourselves, we know how they feel. Nobody who works in suicide prevention, or who cares about suicide prevention, ever wants to see rates going in the wrong direction. Because behind rates and numbers are individuals lost too soon and a wave of grief among families, friends and whole communities.

While the Hunter Institute of Mental Health may have its own views on suicide prevention, the staff who work on the Mindframe program need to remain a consistent (and at times unwavering) source of information and advice for media and the suicide prevention sector. It is not always an easy thing to do when you are asking people to reflect on how they are doing their work, and sometimes reminding them of things they may not want to hear. But at the end of the day, all of the sectors we work with want and need consistency from our national media strategy.

Suicide is not the same as advocacy for other public health issues, such as smoking cessation and reducing car accidents, which have no reported evidence linking the way it is reported to possible harms. With suicide, the evidence is different. The way media report suicide can make a difference to our rates of suicide.

But it is not as clear-cut as a decision to report or not report. While there is clear evidence about the risks of reporting individual deaths by suicide in certain ways, there is generally less evidence currently available about the impacts of broader coverage on the issue of suicide.

Where evidence is less clear, there is a need to be considered in the way we approach public communication. There is also a need for thoughtful planning about media messaging at national, state and local levels, and there should be rigorous testing of messages for their impacts.

At a time when there appears to be little ‘good news’ to report, is there still a place for messages of hope – potentially using the voice of those who have lived through a suicide attempt?

Is there a way to advocate for more resources, without sending the message that nothing has been happening and nothing is working (as that is not the case across the board). And at the very least, can we ensure the community get accurate information about the groups at highest risk, where the increases have been seen (as they have not been across the board).

A summary of key trends for the 2014 data is outlined here for those who may have missed it, with trends represented on the Mindframe website and also in the Hunter Institute of Mental Health’s SlideShare.

Suicide accounted for 1.9% of deaths from all causes in 2014. In males 2.8% of all deaths were attributed to suicide, while the rate for females was 0.9%

Aboriginal and Torres Strait Islander peoples are almost twice more likely to die by suicide than non-Indigenous people and there were 143 deaths due to suicide (102 male, 41 female)

In 2014, suicide accounted for 5.2% of all Indigenous deaths compared to 1.8% for non-Indigenous people.

Given the national media coverage which has occurred this week about the death of a 10-year-old girl in WA, Croakey has asked Mindframe to provide some reflections about the challenges and potential impacts of covering suicide in Indigenous communities. Before making any commentary about the reporting, the Mindframe team will identify and work with advisors to the program from the Indigenous media and Indigenous health sectors to provide some reflections in a separate piece to be published at a future date. The Hunter Institute of Mental Health and the author of this article would like to pay our respects to and acknowledge all of those who have been impacted by suicide, including those who have been affected by reports and discussions this week. These are challenging issues for the media, the health sector and indeed the community.

PrevPreviousBook reviews: recommended reading on climate change, and new ways of working
NextAn invitation to join a “Twit-a-thon Hour of Power” this Thursday, marking 10 years of the Close the Gap campaignNext