On the demise of the COAG Reform Council, who will hold governments accountable for health outcomes? 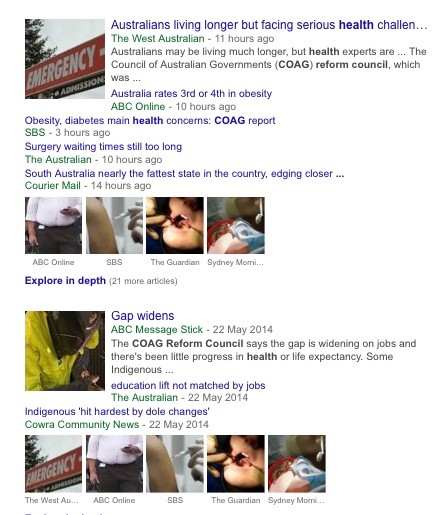 While the health stats in the COAG Reform Council’s final health report are hitting the headlines today (including at Croakey),perhaps one of the more important aspects of the story is that this is the last such report.

Like so many other agencies involved in reporting health and healthcare performance, the COAG Reform Council has been axed.

As Senate Estimates hearings made clear, it is far from clear how the Federal Government’s plans for a new super-agency, the Health Performance and Productivity Commission, will take effect.

Merging organisations such as the Australian Institute of Health and Welfare, the National Health Performance Authority, the Independent Hospital Pricing Authority, and the Australian Commission on Safety and Quality in Health Care  would be no simple task at the best of times.

But this may be the worst of times, given the wrecking ball that the federal budget has put through federal/state relations, and given the multiple jurisdictions and stakeholders involved in these organisations who will need to be part of negotiations towards the new agency.

Yet the drastic changes in health policy and funding announced in the federal budget mean it is critical that we have strong, independent mechanisms for keeping tabs on the impact of policies upon the community’s health, and upon the performance of healthcare.

The Consumers Health Forum has put out a statement arguing that this final COAG Reform Council report demonstrates why the Government should think twice about axing the Council.

“The Government’s plan to terminate the COAG Reform Council will remove an important body, which independent of federal, state and territory governments, has provided an authoritative checklist on how our health system is performing,” said the CHF’s CEO, Adam Stankevicius.

“Such public measures do appear to have spurred important improvements in areas like hospital readmissions and the fall in potentially preventable hospitalisations. But they also show that elective surgery waiting times, particularly in NSW, have deteriorated.

“These insights into the state of the health system provide important measures by which consumers, practitioners and governments can judge performance and work for improvements. To stop the publication of these details would be a triumph of the bean counters over properly informed voters.”

Given the importance of strengthening efforts to improve the health and wellbeing of Aboriginal and Torres Strait Islander peoples, the lack of clarity around who will report in future on “Closing the Gap” efforts is particularly alarming.

“We are still unsure who will perform the ‘Closing the Gap’ reporting going forward,” was the response when I asked the Council about this.

Meanwhile, thanks to Council Chair John Brumby for contributing to this online Q and A with Croakey.

Q: What role has the COAG Reform Council played in monitoring progress in national health reform efforts?  What have been the key reports and the most important findings?

The council has been the independent umpire for two types of agreements.

Our core work has been reporting whether governments have made progress toward achieving the outcomes that are agreed under the National Healthcare Agreement.

Our National Healthcare Agreement reports have evolved over 5 years to provide a greater focus on change in results over time. These reports have identified a number of key results about health in Australia:

Some of our other key findings are about what is not known:

In our first reports, there were substantial limits on the availability of data about rural and regional health outcomes—only this year, for the first time, have we been able to quantify the differences in life expectancy between Australians in major cities and rural areas. We have started to see this improve, and this progress has been a direct result of our council’s recommendations to COAG.

Q: What evidence is there that the Council’s reporting has had an impact, whether on policy or practice?

The COAG Reform Council has played an important role as an independent umpire. We have reported regularly and publicly on the performance of Australian governments in achieving the outcomes that they agreed to at COAG.

The outcomes and reforms agreed at COAG have resulted in Australians smoking less and living longer, more young people completing Year 12, a better-skilled workforce, more people with disability getting the help they need, better opportunities for indigenous Australians and billions added to our economy through productivity improvements and business savings.

The COAG Reform Council reported independently of any one government, on how specifically those governments have performed. The council’s role ensured unbiased accountability, and is important to the good governance of our federation.

Q: Looking to the future, what does the Council identify as the major challenges for reporting and accountability of health reform?

The COAG Reform Council’s final report on healthcare reform shows that over five years governments have delivered impressive progress in key areas like life expectancy, smoking and child deaths. This shows what can be achieved by governments working together.

However, there are key areas of concern that have arisen. Chief among these is obesity and type 2 diabetes. Obesity has increased dramatically, which might portend a future increase in type 2 diabetes, as well as other chronic conditions. These will both pose major challenges if not addressed.

Another factor is our ageing population. In our report we identify worrying increases in the time it takes for elderly Australians to enter high residential care after they have been assessed as being eligible, as well as other aged care services.

Without continued monitoring and committed action by governments these issues have the potential to severely affect the healthcare budgets of Australian governments, not to mention the impact on many Australian’s quality of life and health.

Q: Which agencies will take over the Council’s functions? Which functions will not continue?

It is unclear at this stage who will take over responsibility for reporting.

Through the COAG Reform Council’s reports, governments were held accountable for the commitments they make through COAG. The Australian public were able to judge whether COAG’s investments were delivering real and improved services to the Australian community.

Although there is good reporting done within departments and other jurisdictions, what the COAG Reform Council offered was independent reporting on the performance of specific governments.

Q: What are the major issues identified in the Council’s final report on health reform?

We identify six areas of concern for governments. These are:

Mr Brumby and the Council declined to answer the following questions:

Q: What will be the impact of the demise of the Council – both more broadly, and for health and healthcare in particular?

Q: Have we seen the end of cooperative federalism in progressing national health reform? (Given the Federal Government’s recent assertion that hospitals are a state responsibility alone). If so, what are the implications for health spending, patient care and equity?

PrevPreviousNew report highlights why the federal budget is such a problem for health
NextJoe Hockey is right. Sort of. This is class warfare…Next