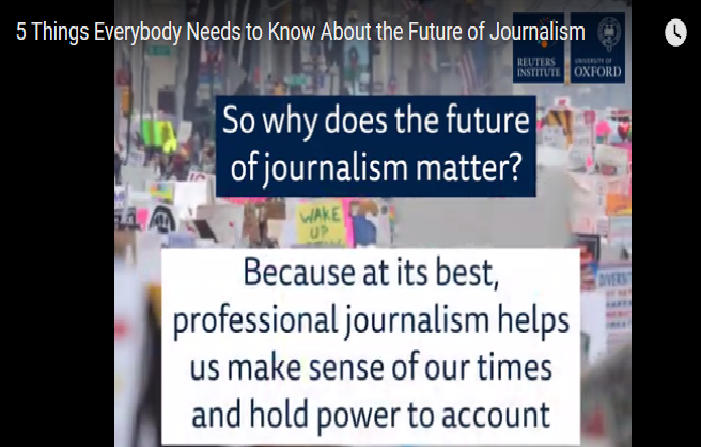 On the future of journalism: a new report and last days to lodge a submission

Have you had your say yet about the implications of digital platforms like Google and Facebook on news and journalism, and therefore on public health?

This Friday (15 February) is the closing date for responses to the preliminary report released by the Australian Competition and Consumer Commission’s (ACCC) as part of its critical inquiry into digital platforms.

As Croakey’s Amy Coopes reported last month, this is an inquiry of major importance that is being watched closely around the world.

As she notes, its preliminary report does not hold back on the monopolistic, opaque stranglehold of Facebook and Google on information flows in Australia which it describes as a real threat to public interest journalism and the democratic functions of the media.

Don’t miss her five-point primer from the ACCC report on why public interest journalism – and this inquiry – matter for health.

Since her article, we’ve seen a number of developments in Australia’s media that provide further fuel for the ACCC to consider.

On the worrying side, there is news that the Australian arm of international online media outlet BuzzFeed will have to cut 11 of its 40 staff as a global downsizing.

Pilloried by some for its posts on cats, Buzzfeed is a valuable media outlet, breaking news and covering issues in diverse ways for diverse audiences as the tweet below shows (here’s an example of some of the important news it breaks: https://www.buzzfeed.com/hannahryan/refugee-medical-transfers-policy-home-affairs-australia).

On the heartening side is news that Eric Beecher’s Private Media will launch an investigative journalism team, backed by John B Fairfax, former owners of The Age and Sydney Morning Herald, that will expand independent online news publication Crikey.

But that comes amid concerns about the future of strong journalism in those former Fairfax publications, now that they are owned by Nine News, or as media researcher and former Age editor Denis Muller put it last year, “subsumed into a media conglomerate whose editorial culture is characterised by mediocre journalism “.

While there’s welcome news that Four Corners host Sarah Ferguson will be turning her strong gaze to the Asia Pacfic as China bureau chief, there’s concern that the ABC’s African coverage will be shut down or downscaled – and at a time when Australia’s foreign aid budget continues to decline.

Five things on the future of journalism

Those interested in lodging a submission with the ACCC might be interested to read a brief new report published by the Reuters Institute for the Study of Journalism at the University of Oxford.

Its overall finding is that journalism is becoming more important but less robust.

It identifies five trends about the future of journalism and their potential impact upon society (see the graphic below) and points to risks posed by growing information inequality, struggling journalism business models, and the role of social media platforms.

But it also says that digital media drive more diverse news diets and argues that, despite the challenges, the best journalism is better than ever – it just may not be as common. 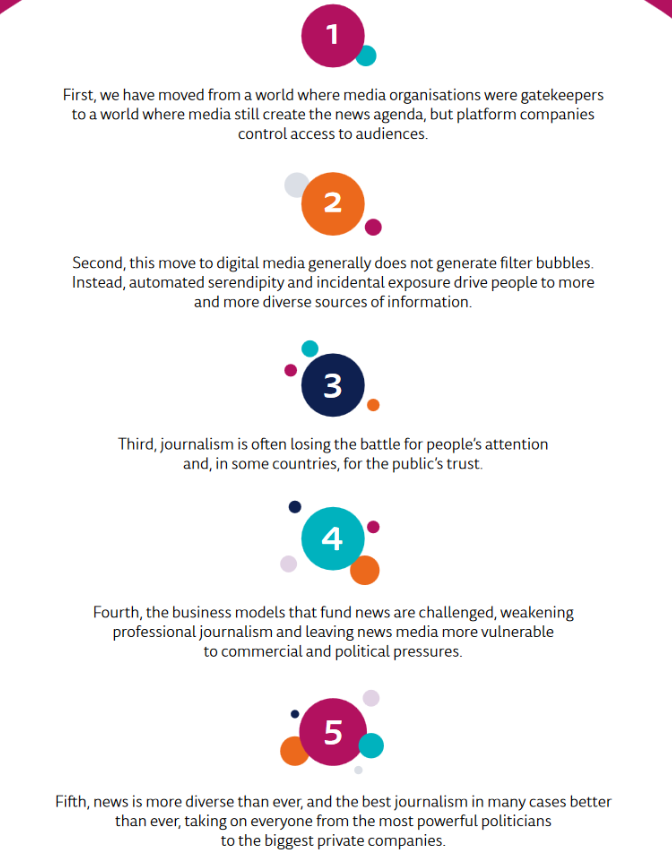 The report warns that digital media have empowered people worldwide but also enabled the spread of disinformation and demagoguery and undermined the funding of professional journalism as we know it, with very wide implications for society. It says:

“The resulting digitally accelerated turbulence challenges all established institutions, from governments and political parties to private companies and NGOs, and underlines the public role and responsibility of the platform companies that increasingly own and operate the infrastructure of free expression.”

When journalism is less robust, it can become incapable of helping the public make sense of our times or holding power to account, it says.

That gets worse when there is open political hostility towards independent professional journalism, at times “a veritable war on journalism”.”

The report  quotes a recent report by British human rights organisation ARTICLE 19 that shows sharp decline in global freedom of expression since 2014.

It warns that journalists today face threats from a range of actors, including governments, organised criminals, business interests and religious fundamentalism, and a rise in ‘strongman’ politics, characterised by leaders such as Turkey’s Recep Tayyip Erdogan, Russia’s Vladimir Putin and Hungary’s Viktor Orbán..

As many Croakey readesrs will have observed, it’s to be seen in countries like the US, which have relied in the past on strong freedom of expression protections.

One of the most worrying developments has been the decline of media freedom in the US, where the press has some of the strongest and oldest protections. American journalists’ ability to report is being undermined by attacks, arrests, border stops, searches of devices, prosecution of whistleblowers and restrictions on the release of public information. This situation has been made worse by the Trump administration’s open hostility to the media.

The impact of this goes beyond the US. The narrative of ‘fake news’ has been seized upon by world leaders, including Aung San Suu Kyi, Bashar al-Assad and Nicolás Maduro, to openly attack the media and close down scrutiny of  their policies and actions.

While it celebrates growing diversity of news sources, the Reuters report sounds a warning about saturation, saying we are seeing greater inequality between those least interested in news and those most interested – inequalities that it says are often broadly aligned with social and economic inequality (and therefore health inequality).

The report also highlights a growing issue of ‘news avoidance’, saying nearly 30 per cent of  respondents to a survey reported they often or sometimes actively seek to avoid the news, because they feel it is irrelevant and depressing and doesn’t help them live their lives.

This of course has to do with disinformation and the central role played in that by digital platforms, but the report says readers are as worried by poor journalism and hyperpartisan political content as false and fabricated content pushed for profit or political gain.

In an important finding for those with an interest in public and civic health and wellbeing, it says:

The wider crisis of confidence between many different institutions and much of the public, with low trust in journalism, politics, and business, creates the environment in which disinformation and populist demagogues can thrive.

The report also looks at the implications of the collapse of the business model of journalism, which has seen more than 3,000 journalism jobs lost over recent years in Australia, many at the traditional strongholds of journalism like The Age and the Sydney Morning Herald.

But it says the risks of this are not necessarily understood in the public arena, with many people either unaware of the business challenges the news industry faces or believing that most news organisations are making a profit from digital news.

As newsrooms become leaner, it says some ’rounds’ will continue to attract strong coverage, such as national politics, but specialised areas and local news are subject to cuts – a trend we’ve seen very much in Australia, including in health and science journalism and across rural and regional media.

“The risk here is not simply retrenchment and less coverage of many important issues, but also that a less robust business of journalism is more vulnerable to media capture by the state or politically motivated owners, and to pressure from advertisers,” the report says.

With governments strategically using state advertising to influence news media and some private interests subsidising or acquiring news media to advance their commercial or ideological agenda – see this  Center  for  International  Media  Assistance publication for more information – the report argues for policy intervention to address “market failures” we are now seeing.