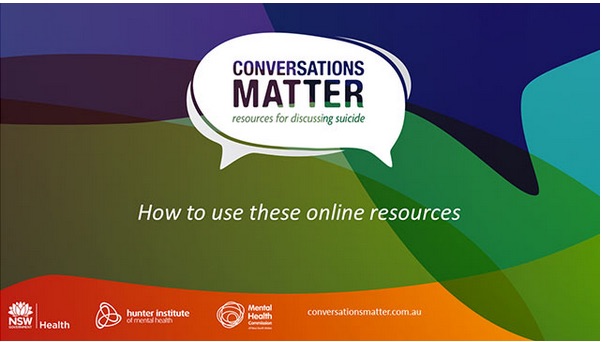 On the latest suicide figures: working for safe conversations and a call for more resources in prevention

Behind this week’s release of the latest national data on suicides is an intensive effort to support the media and health sectors in appropriate reporting, according to Jaelea Skehan, Director of the Hunter Institute of Mental Health, and Marc Bryant, Manager Mindframe National Media Initiative at the Institute.

For a second time in just six-months, the Hunter Institute of Mental Health, led by its Mindframe National Media Initiative team, worked to support media and the suicide prevention sector with the early release of the Australian Bureau of Statistics (ABS) latest Causes of Death data 2015. This included data for suicide deaths nationally.

Usually this data is released annually in March. However, the ABS contacted the Mindframe team in July to say they were preparing to bring forward the next release to September 2016 as part of plans to provide Causes of Death data closer to the year in which the deaths occurred. This earlier release was made possible due to ongoing improvements to coding practices and more timely availability of key reports on the National Coronial Information System.

This week’s data release meant the health, mental health and suicide prevention sectors, and the public/media were provided with the 2015 suicide statistics with the backdrop of RUOK? Day, World Suicide Prevention Day events and on the eve of Mental Health Month. These are a particularly busy periods for media activity for the Mindframe team, which supports responsible media and communications of both suicide and mental illness.

The team had set about putting in place briefing and reporting strategies such as immediate separate teleconferences for both media and the suicide prevention sector. Additional tactics included developing new state and territory written briefings that could be sent to relevant agencies and added to the Mindframe website, along with links that we could share via the Mindframe and Hunter Institute Twitter accounts. In addition, Aboriginal and Torres Strait Islander briefings were sent to Indigenous agencies, for appropriate community leaders to digest and drive media commentary.

At 11.30am on Wednesday (this week), the ABS website went live and staff rapidly crunched the numbers, working on the data to analyse trends as quickly as possible, before triple checking for accuracy. At 11.40am the first 10-minute briefing for journalists around Australia took place: it didn’t give the team any comfort informing the national media that for the first time in history more than 3,000 Australians had taken their own lives in one year.

Across the organisation, our thoughts were foremost of the individuals who had taken their own lives and their families, friends and work colleagues. We know from recent research conducted by Suicide Prevention Australia that many Australians have been impacted by suicide, with the ongoing effect of each death or suicide attempt affecting numerous lives for many years.

At 11.50am, a second teleconference began for the health, mental health and suicide prevention sectors, with more than 50 individuals from 30 agencies across Australia calling in to hear a quick summary of the data and advice on what would be uploaded on to the Mindframe website – within 15 minutes.

The role of Mindframe was also to remind all of those involved in communicating about suicide of the best way to limit risk to those vulnerable to suicide in our communities, while reporting on a specific case of suicide or reporting (or advocating) for the issue more broadly. Reminding people of the recommendations at the point of increased activity is an important way to reinforce the ongoing and more long-term evidence-based approaches taken by the program.

While the Hunter Institute of Mental Health may have its own views for suicide prevention in Australia, the staff working on the Mindframe program need to remain a consistent (and at times unwavering) source of information and advice for media and those working in suicide prevention.

Highlighting need for reform and resources

However, for the Hunter Institute this early release of suicide statistics for 2015 indicates there is not a more important time for us to come together and renew our commitment to suicide prevention than now – as individuals, as services, as communities and as governments across Australia.

The data for 2015 indicated that 3,027 people died by suicide. This now equates to over 8 people per day in Australia. For Aboriginal and Torres Strait Islander peoples, the figures and associated impacts are even worse, with the data indicating they are twice as likely to die by suicide as non-Indigenous Australians, with concerning rates in younger age groups.

While rates are still lower than our last national peak in 1997, we have seen an increase in suicide rates and numbers of deaths, over the past three years. When looking for trends in the data, it is important to look at rates rather than numbers. But, with the number of suicide deaths now over 3,000 per year that represents a distressing number of individuals, families and communities impacted by suicide each year in Australia.

The figures should not sit well with anyone and highlight the need for not only reform, but more resources in suicide prevention in Australia.

We have had lots of focus and attention on youth suicide in this country, which is always important, but the 2014 and 2015 data is a reminder that suicide prevention activity across the lifespan needs to be prioritised, with the highest rates of suicide being in men over 85 years followed by men in their 30s, 40s and 50s.

We need to remember that behind the data are people, families and communities. Many of whom have been struggling with the impact of multiple losses. The human and societal costs behind the recently released figures indicate that the time for change is now.

It is really important as we have these national debates and conversations online, and in the media, that we do so in a safe and responsible way. This will provide an opportunity to foster conversations that empower people to respond to those who are vulnerable and encourage them to reach out, which can also break down stigma, particularly among men, so that they reach out for help early.

Online resources such as Conversations Matter have been developed to help guide professionals and communities in having these difficult conversations, to ensure that people feel supported to have safe and effective discussions about suicide.

There has been a lot of good work happening with a great range of national and state-based suicide prevention services operating in Australia. With direction from the National Mental Health Commission’s Review, the Australian Government has committed to investing in a 5-10 year plan to improve reach and capacity at a local, regional and national level for suicide prevention services.

The Hunter Institute of Mental Health stands with other organisations in the mental health and suicide prevention sectors committing to do things differently.

We also dedicate ourselves to working in partnership – including alongside those with lived experience and priority populations such as Aboriginal and Torres Strait Islander and Lesbian, Gay, Transgender, Bi and Intersex communities – to build the capabilities of others so our work can have a positive impact on more people, now and in the future.

A summary of key trends for the 2015 data is outlined below.

The 2015 suicide data presented in the ABS publication are ‘preliminary data’ and will be subject to a continued revision process. Key preliminary data include:

Also presented in the latest ABS publication are:

PrevPreviousCalls for a regulatory crackdown on the “wild west” of cosmetic surgery. Plus, how is medically assisted death working out in Canada?
NextFor Aboriginal and Torres Strait Islander people, what are the health impacts of social media?Next