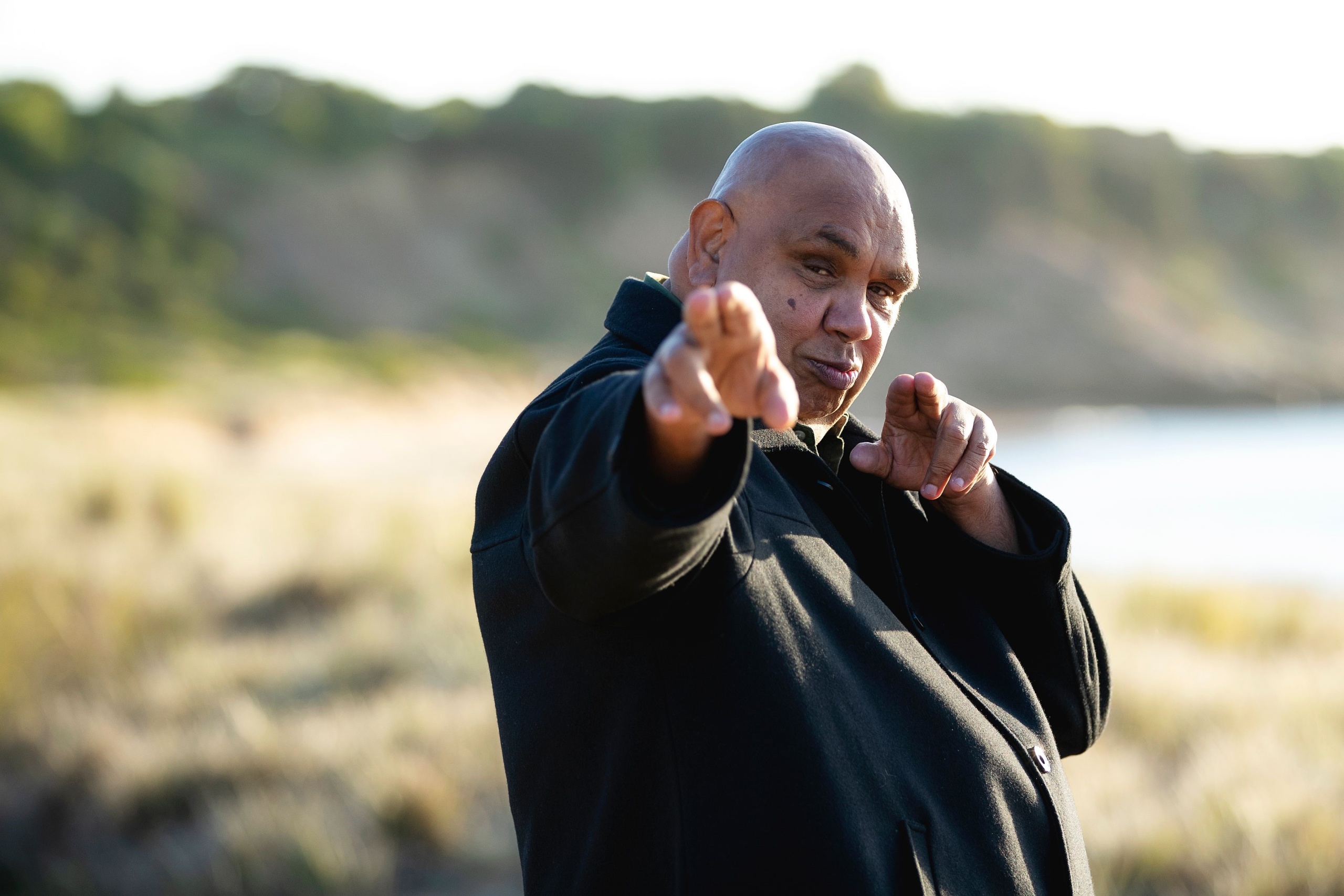 Introduction by Croakey: “Healing the past, strengthening the future, recognising the power of spirit, family, Country and optimism.”

This was the theme of the Rural Health West Aboriginal Health Conference 2022, held on Whadjuk country in Perth from 19 – 20 November.

Uncle Kutcha and his manager were kind enough to invite me along to report on behalf of Croakey at one of his performance dates, in addition to his keynote address at the conference. Both were incredibly moving and the lessons from the experience will remain with me.

Uncle Kutcha finds solace in combining his song writing with activism, something he has done since the 1990’s. It has taken him all over the world. He has worked with artists including Archie Roach, Ruby Hunter, Paul Kelly, Judith Durham, Christine Anu, and many more.

At his performance on November 17, Singer Sue Ray a Kamilaroi woman introduces Uncle Kutcha to the stage saying, “he will take your soul and replenish it.” And that is exactly what he did.

As Uncle Kutcha sings ‘Mrs Edwards’, he is telling you the heartbreaking reality of his lived experiences as a survivor of the Stolen Generations.

Uncle Kutcha’s courage and willingness to share the pain inflicted on him from a young age by the institutions drifts out to reach souls of the people within his audiences. He sings with pure and undeniable honesty.

By the end of Uncle Kutcha’s performance at Lyric’s Underground, the entire audience has surrounded him and are singing and dancing along with him.

In addition to his show at Lyric’s Underground, Uncle Kutcha performed at the Duke of George at Fremantle. The next day he delivered a keynote speech at the Aboriginal Health Conference, also held in Fremantle.

At the conference, Uncle Kutcha, a former health worker, says that health practitioners too often refer to statistics instead of getting to know and understand the people behind them.

“We hate being part of the statistic, yet that is what happens with us,” he said.

He reminds the audience that Aboriginal and Torres Strait Islander people are the most spiritual people on the planet and that Aboriginal Health is all about spirit and not intellect.

“Ask an Aboriginal person about Country, culture and that spirit connected to that Country… we are the knowledgeable ones,” he said.

“Non-Aboriginal people just don’t understand that and they need to know the parameters,” he said.

First Nations communities in the Northern Territory and Queensland have some of the highest rates of ARF and RHD in the world. Roughly 90 percent of people on RHD registers are Aboriginal and/or Torres Strait Islander.

As reported by Four Corners earlier this year, ARF and RHD have been almost eliminated within non-Indigenous populations, but racism and systematic failures are seeing cases of ARF and RHD increase within Indigenous communities.

Epidemiologist Dr Judith Katzenellenbogen and sociologist Dr Emma Haynes are researchers from the University of Western Australia and worked on the End RHD in Australia: Study of Epidemiology (ERASE) Project.

Their research, along with the research support of others, including Bardi and Yjindjabandi woman Dr Dawn Bessarab and Dr Catherine Halkon, has helped inform the RHD Endgame Strategy.

The strategy was previously analysed for Croakey by Halkon and Dr Vicki Wade, both from the Menzies School of Health Research.

Katzenellenbogen opened the session, stating there is an ongoing RHD epidemic in the Aboriginal and Torres Strait Islander population with very high mortality rates.

She explained ARF begins with a group A streptococcal bacterial infection of the throat or the skin. If the infection is left untreated a minority of people will develop an auto reproduction where the body attacks itself.

Those who have had ARF have the predisposition to get it repeatedly – each time doing a little more damage to the heart which leads to RHD.

Experiences of the Yolŋu people

Following the strength-based approach towards research undertaken by Bessarab, Haynes spent 15 months with the Yolŋu people in north eastern Arnhem Land, embedding herself within their community.

During this time Haynes worked alongside Yolŋu researchers to better understand the impacts of ARF and RHD on Yolŋu people in an effort to decolonise health care approaches.

Haynes conceded: “We are still not seeing RHD adequately addressed, and this failure is being attributed in part to the failure to understand really what’s happening for people with rheumatic heart disease.”

Yolŋu people have a strong belief that negative emotions can cause disease and they will tend to walk away when they hear negative stories.

Haynes explained that when the Yolŋu people first heard messages in Yolŋu language about ARF and RHD on their community radio station, it felt really bad to them. This was because it brought back thoughts of lived trauma stemming from colonisation.

Concerns over trauma from healthcare have also been raised by Wade, who recently spoke about the culturally unsafe phrases used in medical notes at an inquest into the deaths of three Aboriginal girls with RHD.

Trauma inflicted on First Nations people through use of culturally unsafe translation is just one of many complexities summarised by Haynes.

Haynes highlighted shame as an emotion felt much more powerfully among Indigenous people than among those who are non-Indigenous.

Haynes gave an example of an inquiry where she was called on as an expert witness. It involved a young boy who was suffering from RHD and died in custody.

“The boy was feeling such shame about having to go up to the doctor in handcuffs that he didn’t go,” Haynes said.

“When it was reported in the news you thought, ‘how bad could it be,’ but this is putting a context around it. It was that bad.”

Haynes explained RHD children are required to have an injection, often every month, for at least 10 years. If health appointments are not set up as a positive experience for patients from the beginning, then it becomes a traumatic experience.

“There are some terrible experiences for some families around [getting] the injection, it’s in the guidelines [about] giving a pain-free injection,” she said.

“Also, from some health professionals we are hearing how traumatic it is for them to give the injection, so there is whole lot of good work that could be done in that space.”

Within Haynes and Katzenellenbogen’s research, one practitioner detailed how ‘increasingly aggressive’ contact from clinics to families has resulted in clinicians reporting families for child neglect because a child has not been brought in for their injection.

Worry, stress, fear and anxiety surrounding child removal is an ongoing impact of trauma which prevents Yolŋu people from listening to and seeking out health information.

Haynes said that health practitioners need to be undertaking cultural safety programs to put an end to systematic racism and that staff participation needed to be supported.

“If you are not supported to do [cultural safety programs] in your organisation, it’s just making practitioners feel bad about the situation they are in,” she said.

Haynes acknowledged that reflective processes such as cultural safety programs may bring about feelings of discomfort for some, but said this can be a positive sign.

“Cultural safety programs are one of the key mechanisms to not only think about your own discomfort, but also what is happening structurally in terms of service provision, policy and government funding models,” she said.

Image: “The world is so white”: improving cultural safety in healthcare systems for Australian Indigenous people with rheumatic heart disease.

Haynes said these findings affirm a world view among Yolŋu people that prioritises positive emotions and connections between family and Country. 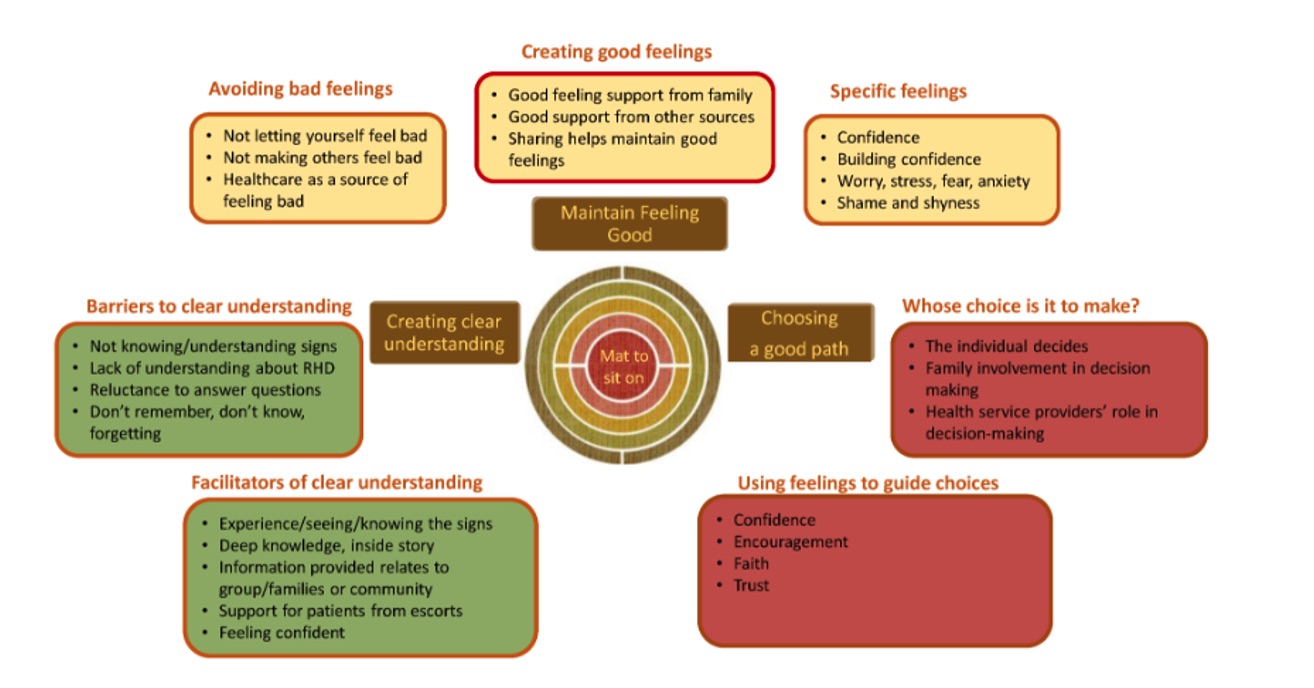 Image: Living with Rheumatic Heart Disease at the Intersection of Biomedical and Aboriginal Worldviews.

For Yolŋu people, good feelings and the importance of feeling confident came up often. For communities raising children to be themselves in their truest form, building confidence was particularly relevant.

Haynes summarised that health professionals need to give clear biomedical knowledge which is not oversimplified and that using metaphors to explain information can help.

Haynes’ research showed it was important to Yolŋu people that they can build a relationship built on trust with the person giving them health information. The research also highlighted Yolŋu people want to feel encouraged by health practitioners that they can make their own choices, rather than being bossed.

• Jade Bradford is a proud descendent of the Ballardong Noongar people in Western Australia. She is a casual freelancer and a research fellow of the First Nations Messaging and Narrative Shifting Project. The research from the fellowship was used to inform the Passing the Message Stick online resource.

These are published with permission, and credit is to Tuna Blue. https://www.tunablue.com.au/ 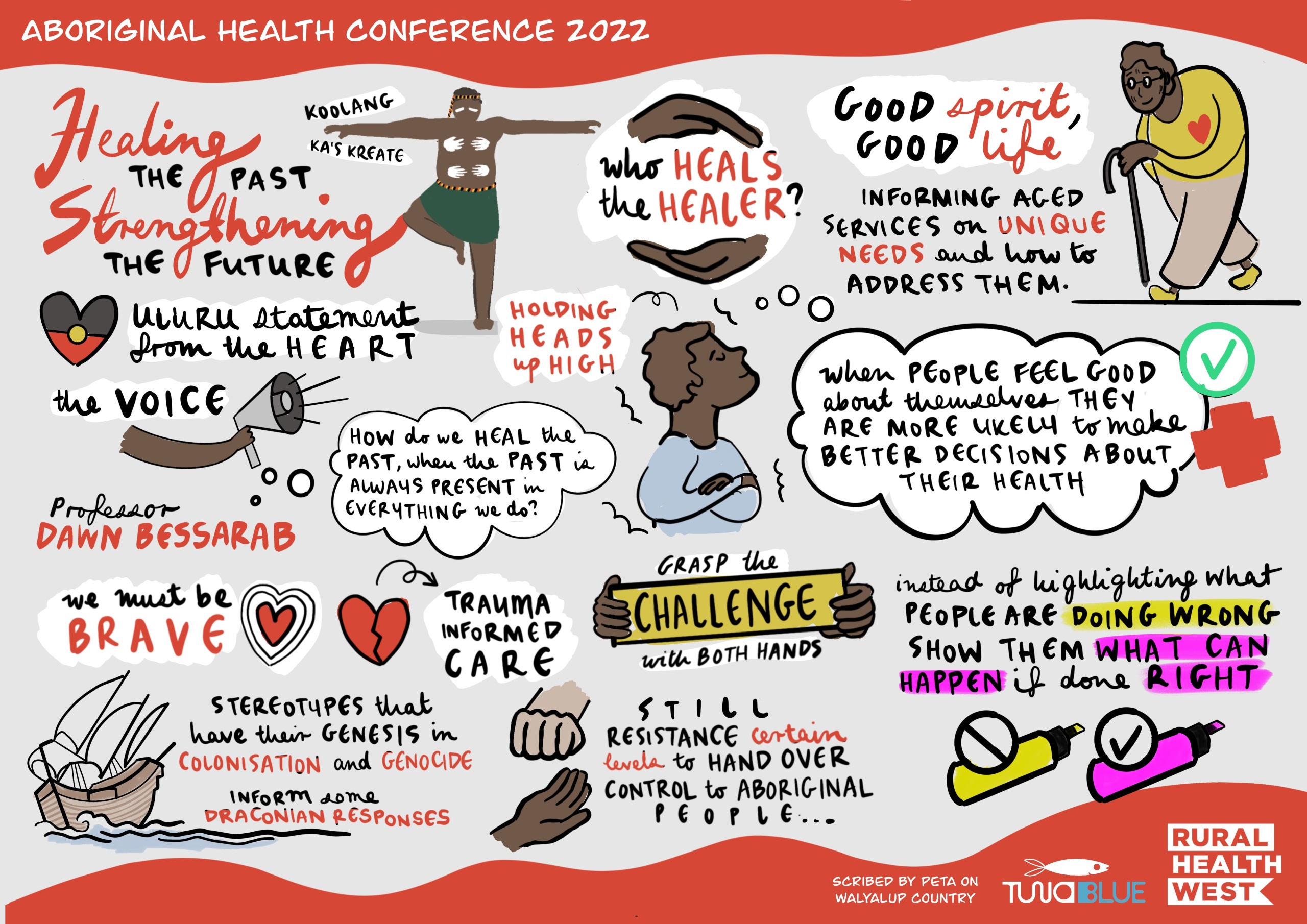 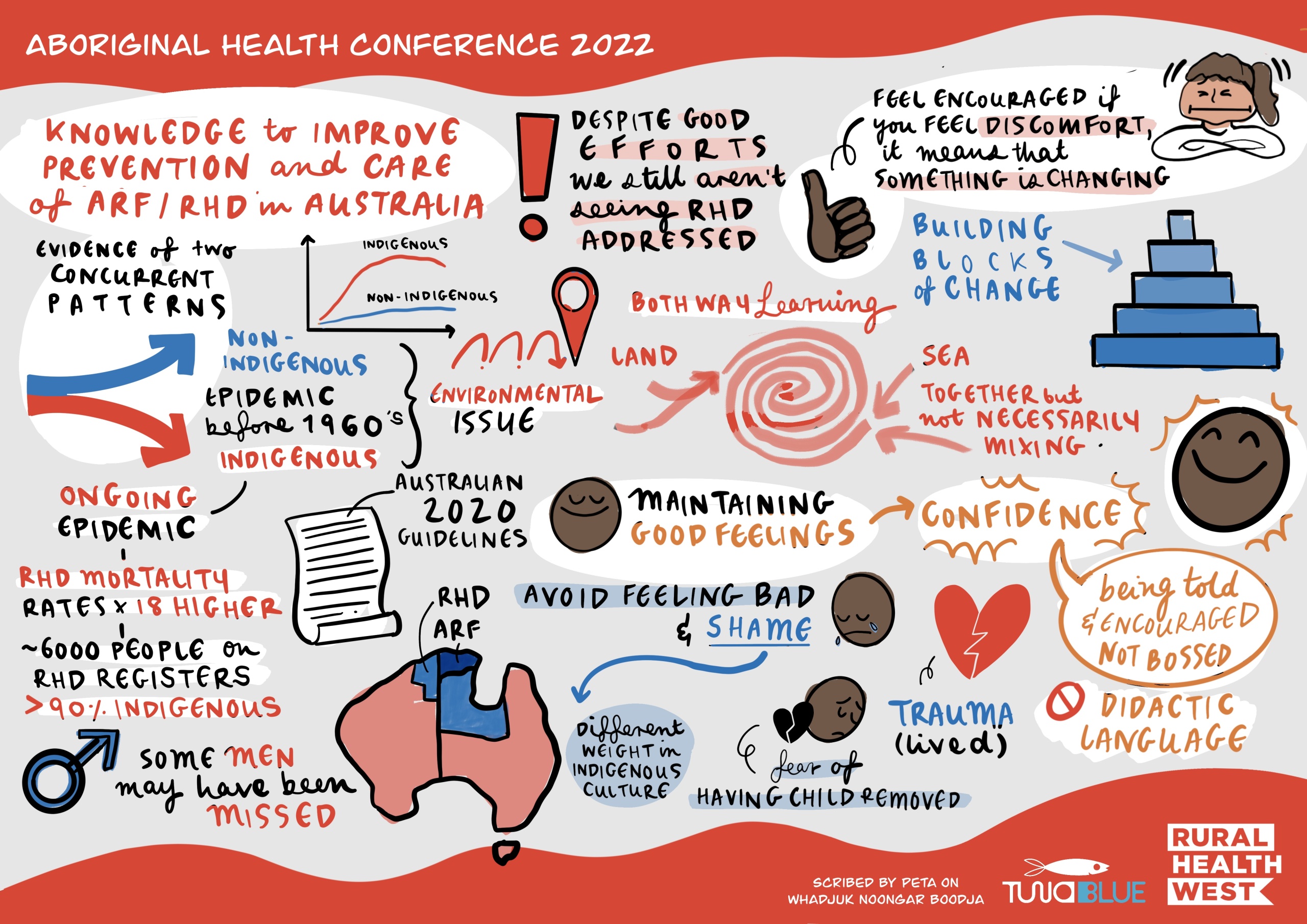 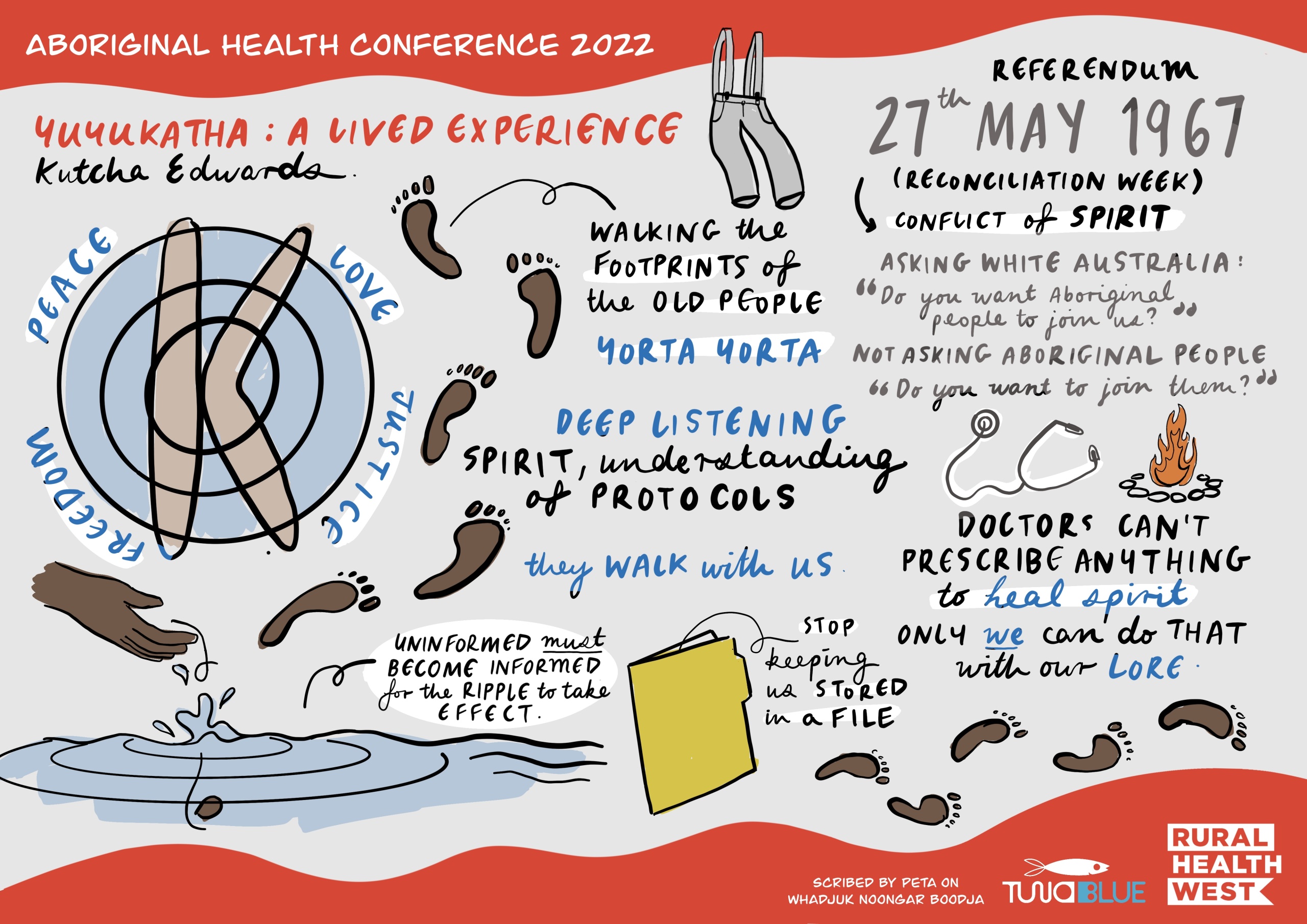 PrevPreviousRaising some pointed questions about research, ethics and the law
NextSenator David Pocock has delivered a win for health equity – but next steps are criticalNext