“Once upon a time, there was a place where children were loved and safe to grow up as they should, happy, healthy, and free to dream dreams and achieve brilliance….”

This is the story Professor Helen Milroy wants us all one day to be able to tell, when we have been able to put an end to “toxic childhoods” that shatter the lives of so many amongst us.

For the moment though, she is working – in rare spare time – on a series of Dreamtime-style children stories, including one she “road-tested” at last week’s Australian Indigenous Doctors Association ­(AIDA) conference, where she holds a special place as the first Aboriginal person to graduate in medicine in Australia.

A descendent of the Palyku people of the Pilbara region of Western Australia, Milroy told delegates she was trying to find new ways to look at health and wellbeing of children through an Aboriginal and Torres Strait Islander cultural lens.

Writing is also a way for Milroy to cope with hearing “incredibly tragic stories”, through a long history as a consultant child and adolescent psychiatrist and now as one of six Commissioners leading the Royal Commission into Institutional Responses to Child Sexual Abuse.

Her story, The Mudlark and the Sun, looks to understand emotion and behaviour, and talks about how we all need our moments in the sun.

It highlighted one of the big issues she raised in her presentation, the loss of a “whole layer” of Aboriginal and Torres Strait families and communities: with so many grandparents missing because of stolen generation policies and much lower life expectancy.

Everyone, she said, deserves to have someone “who is crazy about them”, and grandparents often play that role as sources of unconditional love for young children. Now they are absent for many Indigenous children.

“Too many of our kids are already old people, that’s probably why we die young.” 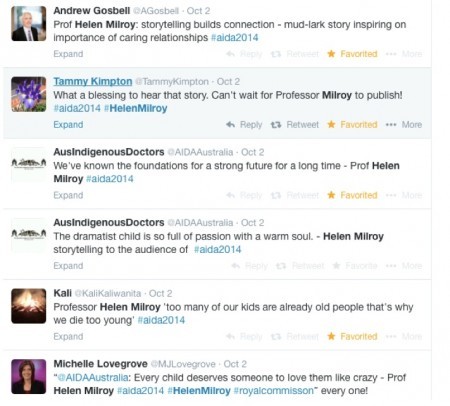 This slide below from an address by leading public health researcher Professor Sandra Eades also starkly illustrates the missing role of grandparents in Aboriginal and Torres Strait Islander communities. 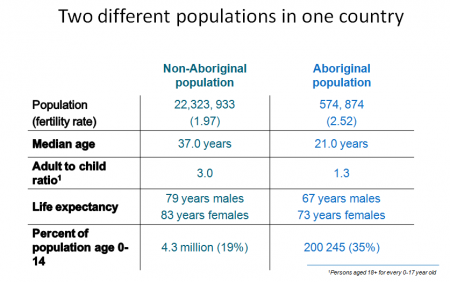 Commissioner Milroy talked about the significant contact that the Royal Commission into Institutional Responses to Child Sex Abuse had had with Aboriginal and Torres Strait Islander people in its enquiries so far. 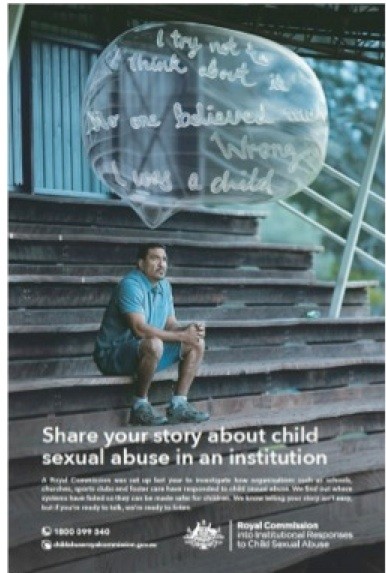 Of the nearly 16,500 calls to the Commission’s call centre, 18 per cent of callers had identified as Indigenous, as had close to nine per cent of the victims attending private hearing sessions (Aboriginal and Torres Strait Islander people make up about 3 per cent of the Australian population).

Milroy said the Royal Commission was a great opportunity to “finally take the lid off” the whole issue of sexual abuse in the community.

“The terms of reference are limited to the institutional context, but no doubt our findings and recommendations will affect sexual abuse wherever it occurs,” she said.

Milroy said the purpose of the Royal Commission was to:

What particularly stands out, she said, about this Royal Commission was its very good support structures to support people going through the process and beyond.

“In the private hearings, individuals may come on their own or with the whole family to tell their story. It’s not a gruelling process, there’s no cross examination,” she said. “It’s the opportunity for them to tell their story in as much or little detail as they feel comfortable.”

People from all ages and backgrounds were coming forward, including people in their 90s “because they’ve had no one else to tell”.

Milroy encouraged delegates to read the issues papers published so far by the Commission, particularly those on clinical support and health services.

“One of the biggest things people have been telling us about their dreadful and tragic experience as children is the impact on their health, and the connection with chronic disease, the shortened adult life expectancy.”