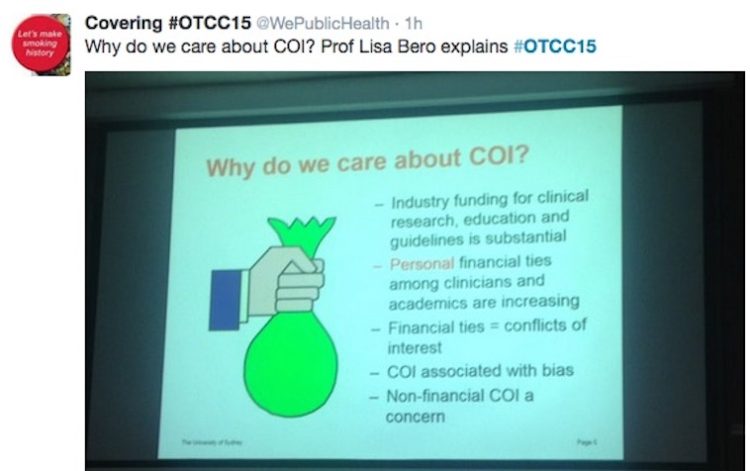 On the tobacco industry, the need for “eternal vigilance”, and a call to “name and shame”

A “tortuously worded disclaimer” from KPMG on its industry-funded report about the risks of illicit tobacco consumption in Australia (see below) was a reminder to the recent Oceania Tobacco Control Conference that the tobacco industry continues to fight on many fronts.

Two keynote addresses at the conference in Perth last week warned that a critical frontline in the battle is the industry’s bid to influence or sway research and public understanding, through reports like the KPMG one, which warns that any party relying on it other than the commissioning tobacco companies should “do so at their own risk”.

The trouble is, said senior Health Department executive Dr Lisa Studdert, that this non-standard disclosure from KPMG is still just in the small print, on the inside front page, which won’t necessarily stop it being cited or reported in the media in the same way that peer-reviewed independent research might be.

Seeking to influence research reporting or to tie up independent researchers or government policy staffers in attempts to access their raw information are just a few of the tactics the tobacco industry has used to great effect, the conference heard both from Studdert and from Professor Lisa Bero, an international authority on research integrity.

As outlined in the article below, Bero suggests a number of strategies to manage the risk of conflict of interest. But given the ongoing harm of tobacco, increasingly in developing nations, veteran tobacco control warrior Mike Daube said in the conference closing keynote that perhaps it is time to get personal with the industry.

See his call below for advocates to “name and shame” tobacco company directors, starting with those operating in Australia.

He also said it’s time for a similar focus on politicians who take tobacco funding: a point that some on Twitter made when a video address to the conference was played from Assistant Health Minister Fiona Nash, whose National Party still permits donations from tobacco companies.

Strive to be ahead of the game

Dr Lisa Studdert, First Assistant Secretary of the Population Health Division at the Federal Department of Health, said Australia’s experience is that a multi-pronged approach to tobacco control is most effective.

It needs to combine a range of strategies, which build on and reinforce one another, that look to the long-term, cover all tobacco products and address all aspects of supply and demand.

But in addition, she said, “we need to strive to be ahead of the game, to anticipate tactics, to identify and understand any loopholes or gaps the industry may exploit.”

“Perhaps most importantly we need to generously share our own experiences in order to learn from our collective history in fighting the global tobacco industry.”

“Who would have thought 15 years ago that we would be faced with the wicked challenge of e-cigarettes at this point in this journey,” she said.

Australia has been in an intense battle with the tobacco industry, which is still being played out in two international jurisdictions, three years after world first legislation to introduce plain packaging was introduced.

Studdert said the tobacco industry had fought a very public campaign against the measures ahead of its implementation. It also submitted large numbers of freedom of information requests to “tie up resources” in government departments.

“The industry is continuing to use these tactics to delay the implementation of tobacco control measures in other countries,” she warned.

(Cancer Council Victorian CEO Todd Harper complained recently about such a tactic in a tobacco industry bid to access survey information about the smoking habits of young Victorian people).

Studdert said another strategy the industry will employ is to commission their own research and reports. She warned:

In our experience, these reports should be approached with caution and are often flawed in that they are commissioned for specific undisclosed parameters and purposes, based on small sample sizes (that are unrepresentative of the population), based on online surveys with inherent self-selection bias, and based on the false premise that a substantial drop in smoking prevalence is immediately achievable. We have to be alive to these situations and call them out whenever we can. 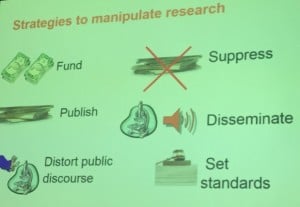 Professor Lisa Bero is a pharmacologist and researcher in evidence-based health care and leads the Bias and Research Integrity Node at the Charles Perkins Centre at the University of Sydney.

She opened her keynote – ‘Taming the Beast – Conflict of Interest and Tobacco Research – with a declaration of her interests and a reminder that a conflict of interest does not necessarily mean someone is biased, but that there is a risk. 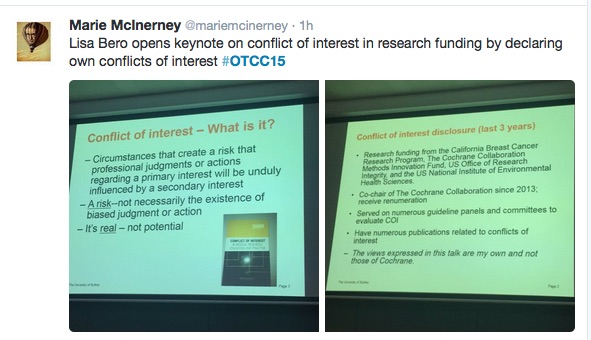 Yet she said the suggestion of a conflict got people up in arms and were leading many journals to seek to use different terms to “soften” it, such as ‘competing interests’, ‘vested interests’ etc. This gets very complicated when work is being translated into other languages so there’s a need to “nail down the terminology”, she added.

In 1998, Bero led one of the first studies to quantify the effects of conflict of interest in tobacco, looking at reviews on the health effects of second hand smoke.

“At the time there were actually more reviews on second hand smoke than original research, so think about that!” she said.

The work found that tobacco funded reviews were 90 times more likely to prove passive smoking was not harmful. With pharmaceutical industry funding, studies are four times more likely to conclude an intervention is effective or safer than the comparator if they are funded by a drug company. She is currently updating this review. 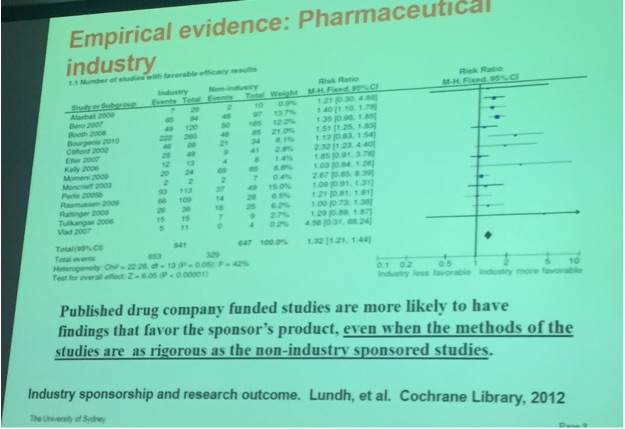 Bero says tracking the many ways that studies can reflect bias is increasingly complex, as companies diversify product lines and have interests in other corporations and industries.

She reported in 2002 on how Philip Morris exerted financial leverage over the pharmaceutical divisions of giant chemical companies by threatening to cut off purchases over nicotine replacement promotions.

Bero said the tobacco industry had opened another recent front in research to influence the analysis of epidemiological data, via three strategies: collaboration, litigation, and legislating policies for data access and quality. 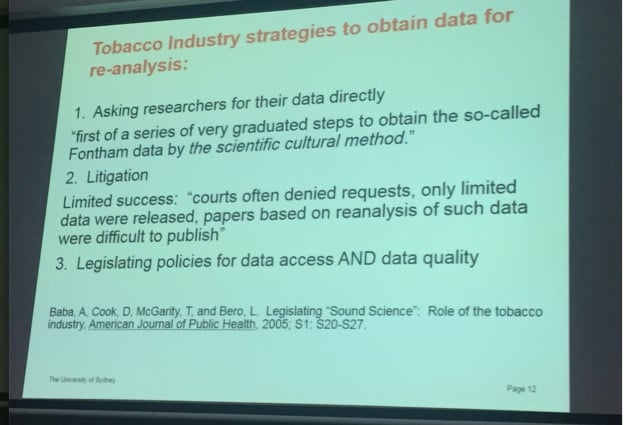 “That doesn’t sound bad, right?”, she said of the third strategy. But she said the industries that co-sponsored the move – including tobacco, fishing, forestry and foods, wanted to influence both access and standards.

“Long story short: laws were passed that any private company could access the data (behind independent and government research) and then reanalyse that data based on their own quality standards.”

So what can be done about industry influence on research? Bero outlined four approaches:

1. Disclose: what is the conflict, how much, who with. Unsurprisingly, she said, research shows that more complete disclosure is achieved by giving people a checklist to fill out rather than just asking if they have a conflict. She warned though that disclosure, while necessary, is not sufficient amid economic studies that show, but not explain, that when people disclose their financial interest it leads them to “give more biased financial advice”.

2. Review: though common responses by people with conflicts who say “I recognize I’m in conflict, I can handle it’ are why it needs to be independent.

3. Manage: either limit or eliminate. Many organisations limit the number of researchers who can have a conflict, or don’t have people with conflicts involved in decisions like study design or publication. Some have banned funding by industry for research in certain areas.

4. Monitor or enforce: this is where many of these policies fall down, she said, when there is no follow through.

“We seriously have to think about how to remove their influence from research.”

Professor Mike Daube has long been a campaigner for tobacco control, well before he was told that bans on smoking in planes were “technically impossible”.

In the closing keynote, he said there has been much progress but that the tobacco industry’s response to plain packaging signals that it is growing even more hardline.

He said this meant there would be more of the following:
• focus on developing markets, and vulnerable groups and communities
• use of litigation nationally and internationally
• use of legislation such as FOI to obstruct and distract
• working through related industries, consulting groups, “think tanks” and front groups
PR and lobbying
• distraction activity that, among other things, seeks to circumvent Article 5.3 of the FCTC
• seeking to attack or intimidate – whether governments or individuals.

Despite being responsible for 6 million deaths annually around the world and rated by the McKinsey’s Global Institute as the top global social burden generated by human beings – above even armed violence, war and terrorism, “the vector, the tobacco industry still flourishes”.

They have been able to absorb criticisms, criminal convictions, billion dollar payouts and continue doing what they do best. They have also been able to buy the support or involvement of far too many people who should know so much better.

The time may have come, Daube said, to get more personal and to directly target Board Directors, who are ultimately fully accountable for tobacco company activities.

Without exception, they have come into the industry in full awareness of the massive harm caused by their product…

While the companies themselves are reviled, found guilty in courts, have to make massive payouts following litigation, and publicly pilloried and some executives and PR people take any public heat, those individuals who are responsible for all their activities remain largely unscathed.

They are treated as respectable figures in the business community. They participate in charitable and other boards and activities. And eventually they move into respectable retirement.

Others, he said, have considered the possibility of action against tobacco companies for their potential criminal liability, but concluded that given the complexities and costs of litigation, this is not likely to be easy or speedy.

Daube referred to work being planned on a model that attributes mortality and morbidity to directors of tobacco companies on the basis of market share and their periods of tenure in their roles.

But in the meantime, he said, accountability could be sought “through the court of public opinion. “

It is time for a national and international program to “name and shame” any and all members of tobacco company Boards of Directors so that they are publicly held accountable for their companies’ activities and the consequences. It is also time to put a similar public focus on those who support them, from consulting groups to front organisations and politicians who take tobacco funding, and to flush out those who are reluctant to declare their interests.

It would not solve the problem of tobacco, he said, but it might make responsible people “think about the consequences of their action in ways they have not done before…and might even change some of their approaches”. 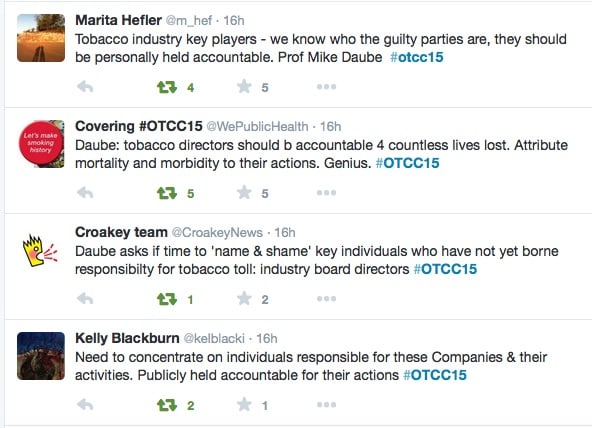