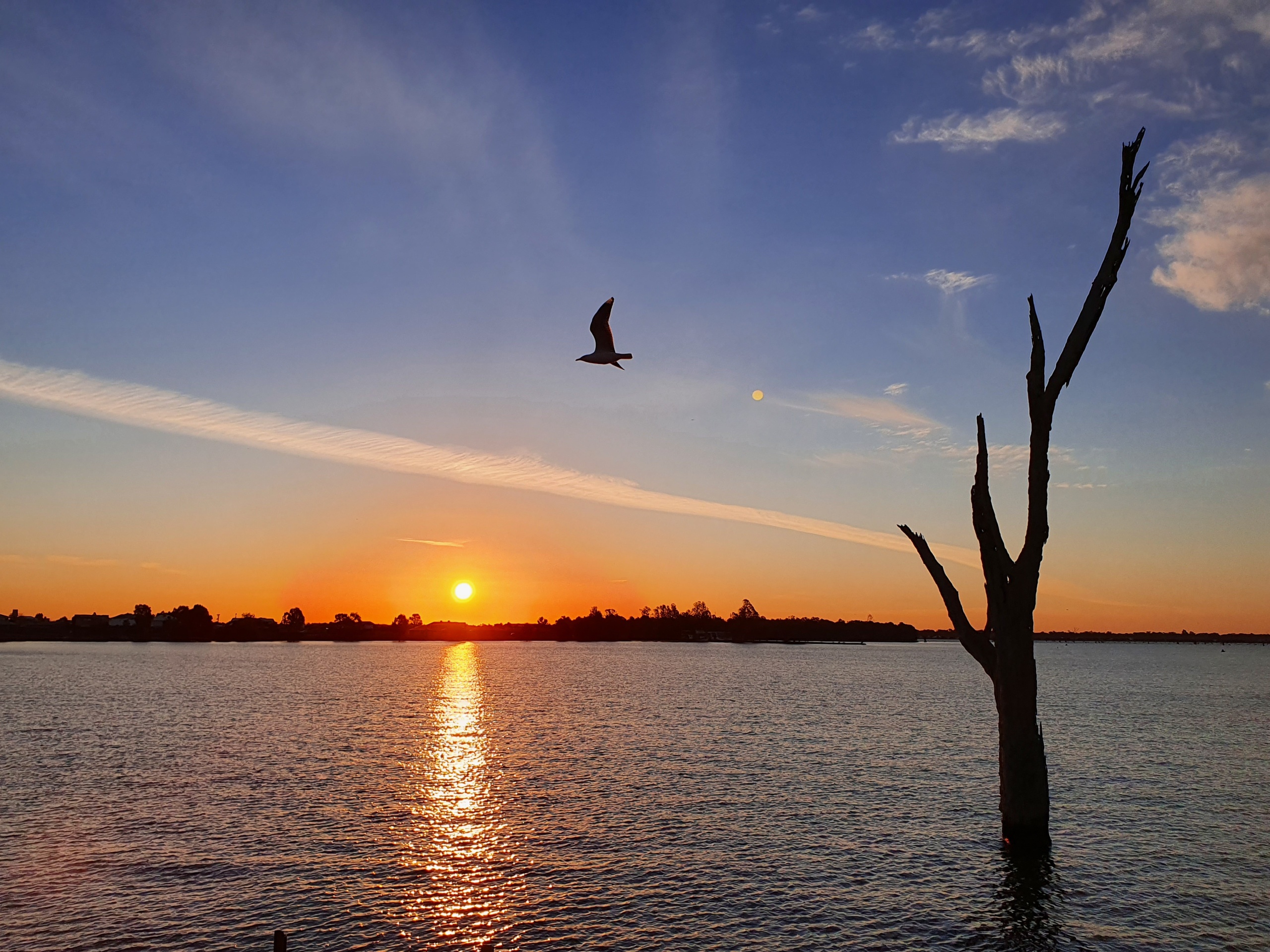 Beyond the static. Lake Mulwala in Yarrawonga, which is Yorta Yorta Country. Photo by Dr Amy Coopes

On the trajectory to a life-changing diagnosis, one story tells so many more

Amongst her many hats, Dr Amy Coopes is a well known journalist and medical practitioner. Anyone following her on Twitter – @coopesdetat – will also know of her generosity in sharing stories from her life and work.

Below, Coopes describes why it took so long for her to receive a life-changing diagnosis of ADHD, and what a difference it has made.

This Sunday (11 September), Coopes will join Dr Lisa Pryor and Dr Norman Swan at the Antidote Festival for a discussion about journalism and medicine. Online tickets are available here.

One afternoon a few months ago, I sat down in the middle of clinical simulation and started crying. And once I had started, I found I couldn’t stop. Every last fuse I was running had blown, and somewhere from the recesses of me emerged a tattered white flag, stitched with four simple letters. Help.

My life seldom makes sense to other people. It’s usually met with variations on the phrase ‘I don’t know how you do what you do’. Sometimes it’s a loaded statement but I believe, in the majority of cases, that it’s a simple attestation of fact.

Regular people don’t live like I do. It’s a well-worn joke among people close to me that I’m pathologically incapable of taking a break. I sidestepped out of journalism to go to medical school, and when I’m not working in the hospital, I’m immersed in a side project. Editing a book. Writing a news feature. Scribbling poetry in the margins of interview notes. Never able to speak fast enough to keep up with my thoughts, darting like minnows in the turbulent stream of my consciousness. When a psychiatrist recently asked me whether I ever felt like I was powered by an internal motor, I laughed with delight. In that lightbulb of a phrase, I finally felt illuminated and understood.

Comedian, writer and performer Em Rusciano fronted the National Press Club last month to talk about her diagnosis – aged 42, amid full-fledged pandemic burnout – with ADHD. It was a raw, impassioned, vulnerable address about growing up divergent in a neurotypical world where the stereotype of ADHD was a hyperactive boy souped up on food colouring.

In 1980s rural Australia, it would never have occurred to my teachers that my mind didn’t work like everyone else’s, I was just labelled distractible, naughty, disruptive, ‘so much potential’ if I would only apply myself. I daydreamed constantly, at such velocity and intensity that I typically had little sense of my corporeal form until it – again – befell injury.

My parents, I’m sure, truly believed that it was only a matter of time before they were reported to the authorities. In one childhood photo I have both arms in casts; I once broke a toe after getting distracted midway through removing my shoe. My mother used to say, presciently as it turns out, that my mind was just always ten steps ahead of where the rest of me was. I was so hopeless at ball sports I was sent home from school one day with a letter instructing my parents to take me for an eye test. (Spoiler alert: it wasn’t visual impairment, I just had ADHD.)

It took me until my fortieth year on this planet to arrive at that realisation, and a big part of the reason was stigma and prejudices I had internalised about what ADHD looked like. These tropes dictated that, if you were productive and successful, you couldn’t possibly be disordered in the way described. I was explicitly told this by people including mental health professionals when I started wondering aloud, encouraged by a number of close friends who received an adult diagnosis and unequivocally felt I should look into the same. Doubters, myself included, ran a fairly convincing logic that finishing medical school should automatically rule me out of the running. How could someone with the attention span of a gecko do something like that?

Part of the reason I evaded diagnosis for so long was that I leveraged my peculiar processing for good. Without conscious bid or realisation, I opted into possibly the best profession for someone like me: news reporting. Quick, glib mastery across a diverse array of topics on any given day, under time and competitive pressures (hello dopamine), in the engine-room of the collective consciousness. I never knew what I would be writing or where I would be going from one day to the next. I could hyperfocus on a given topic, acquit myself of its merits, and move onto the next shiny thing. (See also my affinity, since starting clinical work, for the Emergency Department – “Obviously, it’s the newsroom of the hospital,” was one sage friend’s observation. Triage, treat, rinse, repeat). Far from a problem, my pinball machine brain was an asset as a peripatetic foreign correspondent.

I found the gear shift into medical school incredibly challenging. Suddenly, I was being asked to think and practice methodically; like expecting Pro Hart to colour by numbers except Pro Hart was a group of catnip-addled kittens in a trench coat. I watched my classmates breeze intelligently and effortlessly through cardiorespiratory physiology, neuroanatomy, the Krebs Cycle and ECGs; most of the time I felt I was barely treading water, and taking three times as long to understand the most basic of arcs. I had what was perhaps a prelude to my pandemic breakdown studying for final exams: one day I started crying and it was a good few days before I stopped. I developed hemiplegic migraines that blinded me in one eye and made my face go numb while being examined as I assessed a patient. Very few things came easily to me as a medical student.

Outwardly, as a junior doctor, I was fine, but things became harder the further I progressed. Increasing clinical responsibility and autonomy required more and more of my bandwidth at precisely the same time my personal life – marriage, mortgage, kids – seemed to fall apart, putting a whole other cognitive load on the carnival show of my brain. What I had long managed to marshal to my advantage – a warp-speed, multi-channel, laterally-processing supercomputer – descended into deafening and distracting white noise. Getting help for depression only seemed crank this to 100: without the sedation of sadness my mind went into overdrive. I was working double shifts, freelancing, reading late into the night trying to stave off what I later described to my psychologist as the ‘insatiable brain’. It wasn’t ruminating, I simply could not shut it off.

ADHD is missed or mislabelled in women because the diagnostic paradigm privileges the male archetype of symptoms, itself the product of gendered social conventions. Anyone with experience working in psychiatry can attest to the overlap in symptomatology between Cluster B personality disorders, bipolar and ADHD, and it’s not uncommon to see female patients who have been labelled with any combination of these by varying clinicians. But misdiagnosis can have significant consequences if it results in mistreatment. People can spend months or years on potentially toxic mood stabilising drugs with permanent end-organ effects, with little evidence of indication.

And this is if you can even get in for assessment, a Sisyphean task requiring that you find a sympathetic GP to refer you to a psychiatrist who is willing to assess for and treat adult-diagnosis ADHD. These specialists have waiting lists of 6-12 months long, and you have no choice but to join the queue: only a psychiatrist can diagnose ADHD and initiate treatment (and, at several hundred dollars a pop, of not insignificant cost). This is ironic given the majority of ADHD in Australia is diagnosed in childhood, by paediatricians, and the lion’s share of management is done by GPs, who are arguably better equipped than psychiatrists to recognise and treat the condition.

There are a few moments I remember vividly on the trajectory to diagnosis. The first was sitting in a drug and alcohol workshop with a brilliant doctor who was very passionate about the intersection of undiagnosed/untreated ADHD and substance use disorders. He put up a slide showing some common ADHD traits to look out for in patients, and it was like a rap sheet of my worst hits. I was sitting next to a friend who turned to me with a knowing look and mouthed “It’s you”.

Earlier this year, I found myself covering the Royal Australian and New Zealand College of Psychiatrists’ Great Debate, which considered whether the specialty was underprescribing stimulants (the ayes had it). It got to the heart of many of my own questions and doubts about ADHD medications. It also helped me to understand, at a synaptic, neurotransmitter level, how ADHD brains are different. And it made me wonder if the growing chorus of people encouraging me to get assessed could be right.

I expected indifference or hostility to the idea from my GP and psychiatrist; it went nothing like I imagined. Both warmly, but firmly impressed on me that I ticked all the boxes, and could benefit from a trial of stimulants. They encouraged me to approach it with curiosity and an open mind. Right up until the morning I took that first pill, I didn’t really believe that it would do anything except, possibly, speed my static up.

This, of all remembered moments in my life, will be up there among the most vivid.

I was in my bedroom folding laundry. Everything was suddenly quiet, still. It was like opening a grimy window to the breathless vividness of day. The substance use doctor had used this analogy when trying to explain what it was like living in an ADHD brain. He told us to imagine a radio where the dial was stuck between several stations, every one of which could be heard in cacophony with the other, overlaid with interference and white noise. Taking stimulants, he explained, was like turning the dial and finding a precise single signal, clear as a bell.

Outside, a flock of birds was flying in formation east. There was the soft, fragrant weight of a shirt in my hands. Standing in the stillness, becalmed, I watched the birds coast by, my eyes following them until the last one was out of view. Nothing in the silence but the rustling of wings.

Nobody ever tells you that ADHD is a form of exile. From your senses, your present moment. Yourself. Blink and you miss it. Over and over and over again. Treatment is more than being able to focus, to sit still. It is a homecoming. It invites you back into your body, to feel things you’ve spent a lifetime annexed from. The sun on your face through the spring blossoms, the soft weight of a hand being held. Hunger, thirst. Grief. Remember this place, it says, holding out arms shaped very much like your own. Why not stay a while, pull up a pew. 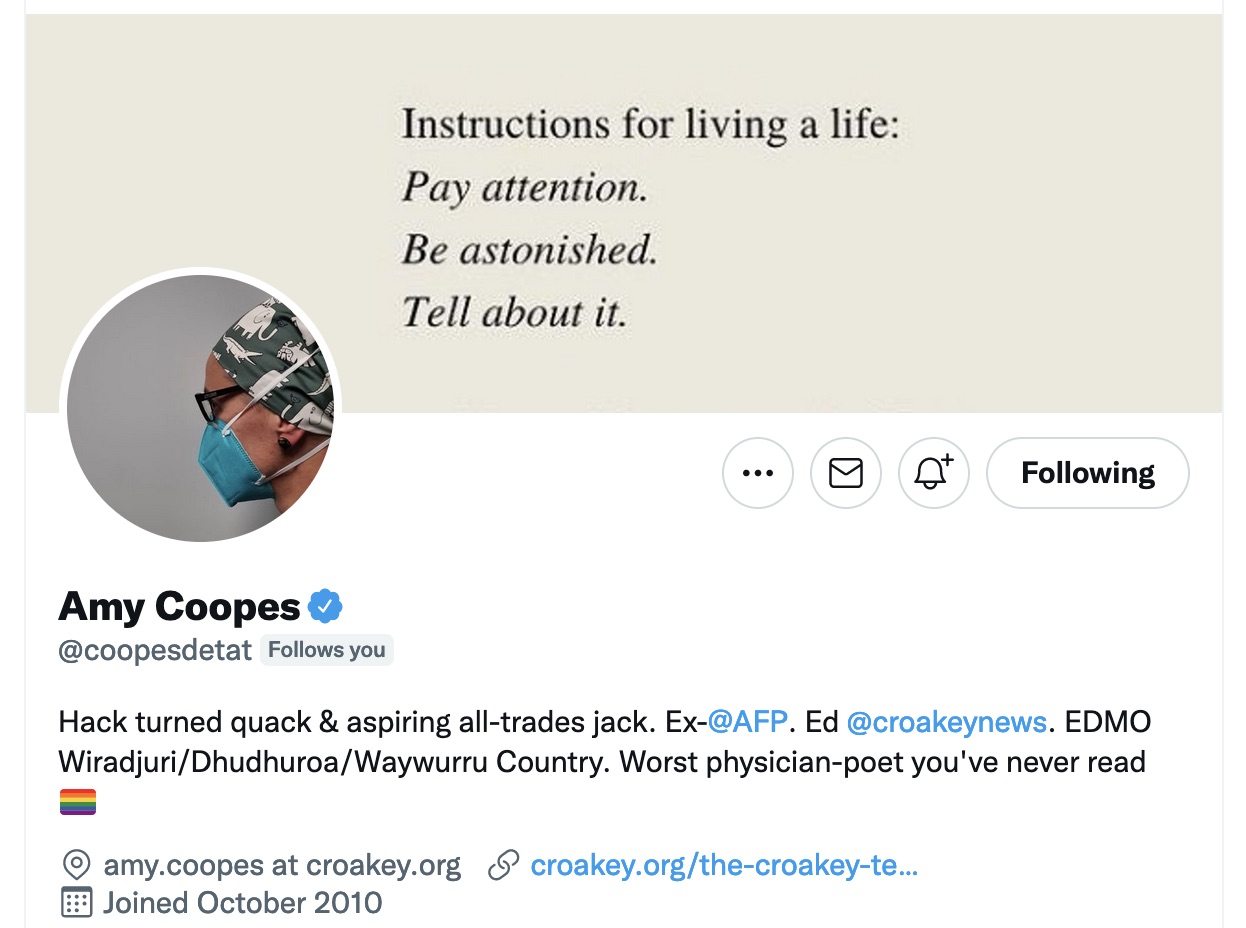 PrevPreviousHow the system is rigged against people with addictions
NextStories from the frontlines: why the low JobSeeker rate is a health hazardNext