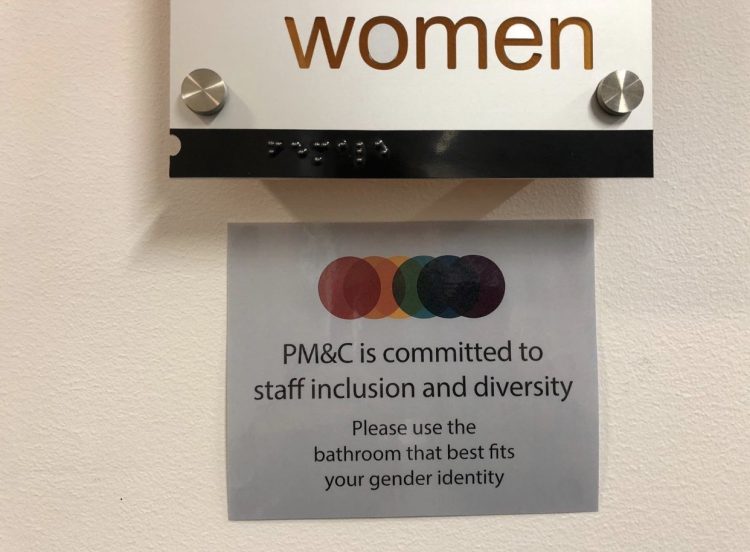 One trans life lost to suicide is also too many

A tweet from a journalist, showing a sign tacked to the door of a staff bathroom at the offices of the Prime Minister and Cabinet, caused a brief stir late last week.

The sign’s message, Please use the bathroom that best fits your gender identity, seemed to take Prime Minister Scott Morrison by surprise, and when questioned about it, he told 2GB radio interviewer Ben Fordham that it was “political correctness, over the top,”and he expected the signs would go.

In the post below, Aram Hosie writes that toilets have long been both a literal and figurative battleground for trans and gender diverse people.

It’s tempting to wonder what would have happened if the conversation had gone another way – if the Prime Minister had chosen to back his department’s efforts to promote social inclusion and shut down possible avenues for abuse.

As Hosie points out, with higher than average rates of experiencing violence, mental illness and suicide in the trans and gender diverse community, a bit of leadership on this issue would be a breath of fresh air.

One life lost to suicide is one too many, which is why my government is working towards a zero suicide goal. I am committed to taking all necessary action to tackle this issue, ensuring Australian families, communities and those facing challenges get the support they need.”

The Prime Minister also powerfully declared his views – on another matter –approximately six weeks later when he was questioned about trans-inclusive signage on bathroom doors within the Department of Prime Minister and Cabinet:

It’s ridiculous. I don’t think this is necessary – I think people can work out which room to use. I have a very clear view about this and I am sure this will be sorted.”

His ‘clear view’ as the interviewer clarified, was that the signs should be removed.

So much of the discourse and debate about transgender people gets reduced to conversations about bathrooms – and it completely does my head in. The general population copes just fine with “mixed gender” use of facilities all the time – like on aeroplanes and IN LITERALLY EVERY SINGLE ONE OF OUR OWN HOMES – but mention a transgender person and a public bathroom and people’s brains seem to leak out of their ears.

But here’s the thing. The only people who really have any cause for concern about public bathroom use, are trans people. I could tell you a hundred anecdotes of trans and gender diverse people being harassed and abused in public restrooms.

There’s some actual research, too, that shows that far from posing a threat to anyone else, trans and gender diverse people are the ones at risk of harm.

Public toilet anxiety is a thing for trans and gender diverse people.

Experiences of abuse, harassment and sometimes even violence, in public toilets, is also a thing for many trans and gender diverse people.

And fearing, or being exposed to, near-daily abuse, harassment and/or potential violence is really, really bad for your mental health.

Moving through a world that bombards with you with messages that you’re wrong, perverted, weird, or just a bit ikky is bad for your mental health.

Being subtly or actively excluded from society, being shunned, ostracised, and having the things that make you feel safe taken away from you is really bad for your mental health.

The world that trans people live in, is one that too often, would rather we didn’t.

Trans and gender diverse people internalise these messages after a while. It’s pretty hard not too. 1 in 2 of us in this country, in Australia, end up trying to kill ourselves.

Let me say that again. ONE OUT OF EVERY TWO trans people living in Australia has attempted suicide. Our Prime Minister, Scott Morrison, has declared that one suicide death is too many. Declared that he is committed to taking all necessary steps to get to zero suicide.

If he really means that, then he needs to stop demonising trans people. (This is not the first time he’s made disparaging remarks about us.) He needs to learn about the things that keep us safe and make us feel included and not broken and as the leader of our nation he needs to set an example for everyone else.

Trans people are people too. One trans life lost to suicide is also too many.

I look forward to the day that our PM demonstrates that he believes that, too.

Nationally recognised transgender advocate Aram Hosie is a writer, speaker, and freelance consultant with over a decade’s experience working in the health and social justice sectors.

*If you’re a trans or gender diverse person living in Australia please know that you are not alone, there is nothing wrong with you, and help and support is available if you need it. Q-LIfe is a good place to start: https://qlife.org.au