One veteran on average dies by suicide every two weeks. This is what a royal commission needs to look at

Introduction by Croakey: More than 400,000 have now signed a petition urging a Royal Commission into the Veteran suicide rate in Australia launched by Julie-Anne Finney, whose son David died by suicide after suffering post-traumatic stress injury.

The Federal Government has long resisted the call by veterans and their families, establishing instead a National Commissioner for Defence and Veteran Suicide Prevention but today, facing defeat in the House of Representatives, it announced it would not oppose a motion demanding the establishment of the wide-ranging inquiry.

“Now, it’s up to the Government to honour that call,” said Tasmanian Independent Senator Jacqui Lambie who has long championed the campaign.

In the article below, originally published at The Conversation, Griffith University analyst Deborah Morris and Flinders University Associate Professor Ben Wadham discuss what the Royal Commission needs to examine.

They write that the role of the national commission is likely still necessary to prevent future suicides, but that a Royal Commission is vital to draw the links between veteran suicide and the institutional failures and bureaucratic barriers cause harm daily for veterans, and to fill critical data gaps.

This is an important day for the veteran community. After five years of campaigning for a royal commission, parliament has backed a motion to establish one. Prime Minister Scott Morrison has also signalled he would no longer oppose the move.

For at least two decades, there have been numerous inquiries into veteran suicide, institutional abuse, mental health, the transition from military to civilian life, and combat trauma — with little positive outcome.

More Australian veterans have lost their lives by suicide than have been killed on active duty since ADF personnel were first deployed to Afghanistan in 2001.

In October and November of last year alone, nine veterans took their lives, leading Senator Jacqui Lambie to argue veteran suicides should be treated as “one of Australia’s most pressing problems”.

Thirteen veterans have tragically taken their life so far this year.

A petition calling for a royal commission into veteran suicide — led by the families of those who have lost their lives — has garnered more than 400,000 signatures.

Yet, despite the urgent need and popular support for the idea, a royal commission didn’t have the political support of the Morrison government until this week. 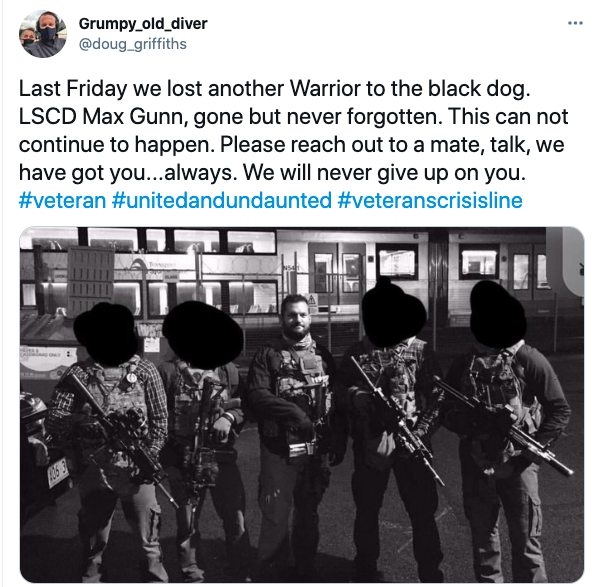 Last year, a report by the Australian Institute of Health and Welfare (AIHW) said

reducing the rate of serving and ex-serving suicides is a priority of the Australian government.

Despite this recognition, the matter has not been met with a sense of urgency.

In response to calls for a royal commission, the government established a national commission for defence and veteran suicide prevention, which has largely been seen as inadequate. 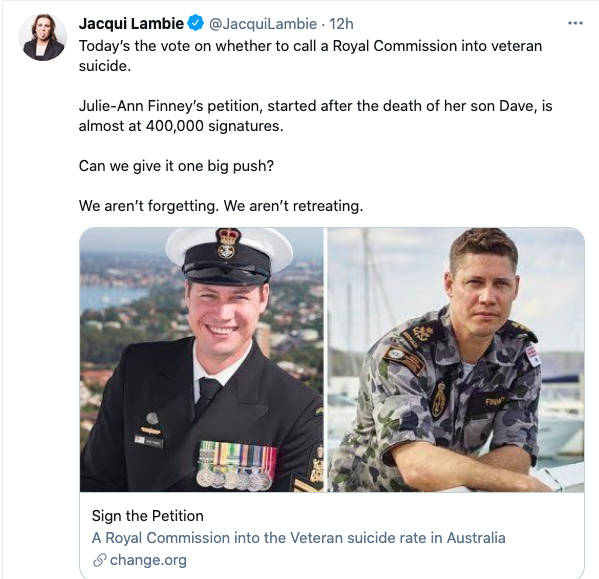 The reaction from former and serving military personnel was also mixed. Critics said the national commission was inferior to a royal commission in terms of its scope, independence and resources. The timing of the move by the government was also viewed as problematic.

While the role of the national commission is likely necessary to prevent future suicides, we believe a royal commission is still vital to bring attention to the links between veteran suicide and the institutional failures and bureaucratic barriers that are causing harm daily.

Read more: Veterans have poorer mental health than Australians overall. We could be serving them better

There is imprecise and limited research into veteran suicide in Australia. Research commissioned by the Department of Veterans’ Affairs and conducted by AIHW found there were 419 known suicides of serving, ex-serving and reserve defence personnel between 2001-17.

That is on average one death by suicide every two weeks.

Veteran Scott Harris has compiled statistics on veteran suicides for The Warrior’s Return Facebook page, and has counted 731 deaths by suicide over the same period.

The Australian Institute for Suicide Research and Prevention (AISRP) has described the lack of information on veteran suicides as a “serious shortcoming in current knowledge”. The organisation said there is

We aren’t just lacking data on veteran suicides; there is limited knowledge of veterans in the Australian community more broadly. In fact, questions about veterans will be introduced to the census for the first time this year.

A royal commission will enable us to gather information on the defence and veteran communities to help understand their needs and ensure we craft well-targeted policies.

Five key points to consider for a royal commission

The terms of reference of the royal commission must be designed by the veteran community, as well as policy-makers and other experts. Significantly, to preclude serving and former ADF members from such an investigation would continue to silence the very people it seeks to help.

We have identified five key points to ensure a rigorous and effective commission process.

1) The terms of reference should include suicidality – not just suicide. Suicidality is a term that covers both suicide ideation (serious thoughts about taking one’s life) and actual suicide attempts.

2) It should also focus on the structural and institutional systems that contribute to suicidality. This would include the experiences of defence personnel who have struggled to get the support they need both during and after their military service.

For instance, this means looking at the bureaucratic obstacles that have prevented some veterans from accessing physical, mental and financial support after leaving the ADF, or the institutional practices and structures that encouraged abuse, bullying, harassment and denigration in the ADF.

Read more: We need to talk about suicide in the military

3) The terms of reference should look at the broader practices and processes of the ADF, including but not limited to:

4) The royal commission must include protective measures for witnesses, akin to the disability royal commission. Given that both serving ADF members and public service employees are restricted in public comment, potential witnesses are unlikely to come forward and provide evidence without strong protections.

5) The appointment of the commissioners also requires real independence, free from bias. This was a significant sticking point with the establishment of the interim national commissioner for veteran suicide prevention, Bernadette Boss, who previously held various command and staff roles in the ADF.

As such, we argue those appointed to the royal commission should have no association with the ADF – both past and present – and a wider background than just mental health.

Morrison said today a royal commission is not a “silver bullet”, and we tend to agree.

Nobody believes this process will be easy – just that it is necessary. A royal commission, with broad terms of reference, has the capacity to draft a blueprint for the best way forward.

If this article has raised issues for you, or if you’re concerned about someone you know, call Lifeline on 13 11 14.

PrevPrevious‘They died surrounded by family and friends (who could get leave from work if they needed)’
NextAn Indigenous Voice: The time for action is nowNext