One of the clear themes from the National Rural Health Conference has been the importance of social connections and online support for health and wellbeing.

On a related note, there have been many discussions about how social media is powering advocacy for rural and remote health, and the importance of online connections for health service development and delivery.

In the wake of the Coalition’s NBN policy launch yesterday, conference delegates have been directing some pointed tweets to @TurnbullMalcolm.

Parri Gregory, who kindly volunteered to help with Croakey’s coverage of the conference, reports below on some of the discussions about telehealth and social media.

No wonder #ruralhealthconf has been trending

It may have been the magic of a wand that sparked uproarious laughter on Monday morning, at the start of the first full day of the National Rural Health Conference (NRHC) in Adelaide, but by the end of the day the magic of technology and its utility within the health field was high on the agenda of many delegates.

The wand in question belonged to James Fitzpatrick, former NRHC Master of Ceremonies, Young Australian of the Year (2001), Fellow of the Australian Rural Leadership Foundation and current researcher at the Telethon Institute for Child Health Research.

James’s enthusiasm was matched by Tanya Lehmann from Country Health SA, who was dressed as a circus ring master complete with whip, and the pair acted out a theatrical quarrel between managerialism and creativity in the health context, resulting in the obvious conclusion that both are needed for success.

Following this bright start to the day, the technology theme began with a Top 20 presentation from Deborah Smith, of the Consumers Health Forum of Australia. Deborah’s presentation, called “One voice matters, many voices make a difference”, explained that in the online world, the barrier of distance disappears.

She said that, as consumers from all locations are critical to the development of health policy, these voices can be – and should be – heard in an online environment.

This is particularly relevant and possible in a country like ours where 86% of our population have the Internet at home, 1.8 million people are subscribed to Twitter, and 13 million people have Facebook accounts.

About 70 delegates attended this particular session, ‘Technologies connect’, and having instructed us all to stand, Deborah began by asking those of us who own a smart phone to take a seat. Just five were left standing, all of whom admitted to seeking information from the online world within the previous 24 hours by other means.

No wonder #ruralhealthconf has been trending in Adelaide.

Also briefly trending was #telehealth, no doubt promoted by the super-sized projection screen in the main hall which at this conference is being used to display an interesting (albeit distracting) live twitter feed during the main plenary sessions. These plenary sessions are also being broadcast on the internet.

The second plenary session on Monday included three keynote speakers who each talked about telehealth at some stage. Sue Middleton from the COAG Reform Council; consultant Mick Reid; and Australian Government Chief Medical Officer Chris Baggoley, were later asked a rhetorical question from one delegate: why was it necessary for this delegate to have to come all the way to NRHC 2013 to become aware of the many others who are also conducting research on telehealth, or trying to use it in their workplaces across Australia?

Instead, she said, she should have been able to learn from those with expertise in the field or those with advice to provide from lessons learned, and to collaborate with them across the country using the very medium that enables them to reach patients.

Telehealth is the use of videoconferencing technologies to conduct medical consultations with patients who face barriers in access to specialist care, such as travel, time and cost.

So it seemed particularly appropriate that this term was prominent in a setting that has enabled participation in this conference of interested parties who may otherwise have experienced barriers to their participation here – like travel, time and cost.

The technology theme spilled beyond the plenary sessions, with the concurrent sessions hosting at least nine papers directly associated with telehealth or the use of social media in health promotion or service delivery in rural Australia.

Examples of these included Deborah Dean’s presentation of results and recommendations from her ongoing project in Far North Queensland to develop a telehealth model of care for people with diabetes, and an appearance from Liz Barrett and Michael Edwards of the NSW Rural Doctors Network, who presented an evaluation of desktop telehealth solutions in rural and remote NSW.

Fiona Reid, from Women’s Health and Family Services, the largest women’s health centre in WA, went a step further by including two of her colleagues in her presentation live from Perth via teleconference, in an effort to show the simple and reliable nature of the teleconferencing system which their organisation regularly uses to provide health and wellbeing services to women, their families and communities.

In another session, the youthful and charismatic Shannon Nott from ‘Future Health Leaders’ (NSW Health) presented his paper exploring the important role that social media can play in health practice and how it can be used to engage the next generation of health leaders in rural and remote communities.

Having described the ceaseless use of social media by future health leaders like himself, he no doubt went straight online afterwards to share with his absent friends the highlight of his day here in Adelaide.

And if that highlight wasn’t his own presentation, then just maybe it was James Fitzpatrick’s magical wand.

• Parri Gregory worked in public health research at Centre for Health Initiatives at University of Wollongong before working and travelling the world for five years, including riding his bike across Europe and New Zealand.

His special area of interest is physical activity and obesity. And he happens to be looking for a job…

Dr Gerry Considine (Twitter: @ruralflyingdoc), a rural GP registrar and keen Tweeter, has been filing audio interviews from the conference for his blog, ruralflyingdoc.

You can hear interviews with:

Dave Townsend (@futuregp), a medical student and the current GPSN chair about his time studying in rural areas.

Alison Fairleigh (@alisonfairleigh), a rural mental health advocate who talks about living in the country and what motivated her to do something about her passion of mental health in the bush.

Donna Burns, who works for the Hunter Medicare Local, talked about working and living in the country – and has some ideas if she was the NSW Health Minister…

Meet some of the “power-Tweeters”
(Alison Fairleigh, Robbo, Leanne Coleman and Gerry Considine) 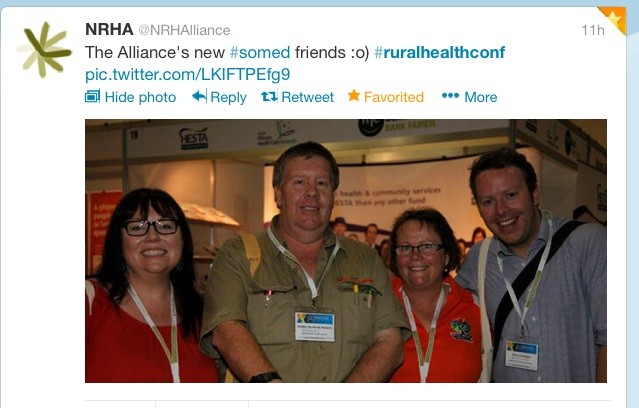 • Recognising an unsung hero – and some vox pops

• NDIS is shifting the paradigm, and the balance of power