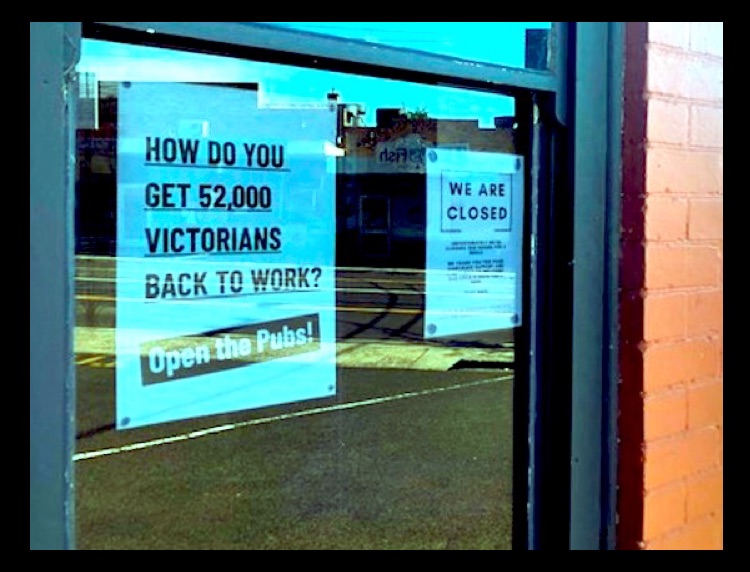 Opening pubs, bars and nightclubs: what are the risks?

As shown by the photograph above of a Melbourne pub, the alcohol industry is mounting an active campaign to persuade politicians and the public that opening licensed venues is important for the Victorian recovery.

However, public health experts argue below that Premier Daniel Andrews is right to keep licensed venues shut as long as possible, “ensuring that we can get Victoria moving again without sacrificing the hard work that all Victorians have endured during this long lockdown”.

Policies that effectively prevent spread right now will allow business to get back to normal sooner and could potentially prevent future shutdowns, they say.

They argue that other jurisdictions should also take note:

Should they suffer further outbreaks, sensible precautionary measures around on-premise alcohol service could protect precious community tracing resources and reduce the risk of another wave of infections.”

In the past few days, some media (see the Today show on Channel 9, on 9 September) and alcohol industry representatives have argued that the Victorian roadmap to recovery needs to prioritise business and allow licensed venues to open and sell alcohol on premise.

Public discourse around COVID-19 has shifted from the importance of ‘flattening the curve’ to how to safely ease the restrictions imposed on citizens and businesses.

The transition to regular life carries the risk of a further wave of infection. In order to prevent this third wave, locations and activities that pose a high risk of transmission should continue to either remain shut or be subject to greater restriction than other locations with lower levels of risk. High-risk locations include those that attract crowds in close proximity, and where alcohol consumption undermines social distancing and personal hygiene.

Trusting intoxicated people to maintain social distancing might be good for business in the short term, but experience from around the world, and importantly, a concern for the Victorian and Australian community, would suggest these narratives are deeply unhelpful.

“If I could go back and redo anything, it probably would have been to slow down the opening of bars, now seeing in the aftermath of how quickly the coronavirus spread in the bar setting,” Texas Governor Abbott said during an interview in El Paso.

Governor Abbott added that people “go to bars to get close and to drink and to socialise, and that’s the kind of thing that stokes the spread of the coronavirus”.

The Texas Medical Association has produced the table below, which identifies ‘going to a bar’ as the most risky behaviour for COVID transmission.

Nightmare stories abound from other countries.

In Seoul, over 100 cases linked to a single person attending a nightclub. An outbreak linked to a Prague nightclub accounted for 98 cases. In the US, a bar in Orlando, Florida had its liquor license suspended after more than 40 people who went there upon its reopening caught coronavirus. Nightclubs in British Columbia, Canada, have been ordered to shut, and over 300 people were quarantined after a nightclub outbreak in Zurich, Switzerland.

We also have a number of relevant examples in Australia. The first major outbreak in NSW post-lockdown was an outbreak from a pub that welcomed 1,000 people over a day that a single truck driver with COVID visited.

It would make sense to think that venue operators would be keen to adhere to the public health laws, if not for their own wellbeing, then maybe for the health of their patrons.

Unfortunately, there are many examples of venues that have flagrantly ignored the laws designed to protect our community.

Recently, the Unity Hall Hotel in Balmain was ordered to close after multiple breaches of the Public Health Order. The hotel has been ordered to close for seven days and was fined $10,000 by NSW Liquor & Gaming and NSW Police. The order for closure comes after the pub was found to be hosting two birthday parties that were not in line with COVID-19 Safety Plan requirements, one day after receiving penalty notices for other breaches. The Bondi Bowls club was similarly issued with fines with the ‘venue operating as though COVID safety measures were optional’.

In South Australia, photos and video of crammed dance floors and packed line-ups into venues in various locations have emerged on social media.

Another example was the stark photos of up to 250 people queuing outside the Golden Sheaf Hotel in Sydney, shortly after the end of the first lockdown. The Golden Sheaf’s operator, Solotel Group, reportedly insisted the venue practised “strict social distancing and COVID hygiene and safety procedures”.

Throughout history, venues have claimed no responsibility for what happens on their doorstep – not an encouraging approach when it comes to dealing with a pandemic.

While there many terrific venue operators who would adhere to COVID measures, it only takes one or two to undermine all of the hard-won gains.

What does research say?

The following weekend the AHPPC released a statement noting that a lack of compliance with social distancing guidelines necessitated tighter restrictions on indoor gatherings, and the Federal Government, in cooperation with State and Territory governments, closed non-essential businesses from Monday 23 March.

Using smartphone sensors validated to count pedestrians moving through night-time entertainment precincts (NEPs), we calculated change in the number of people in NEPs before and after the restrictions.

The high numbers of people who attended the Fortitude Valley after the AHPPC announcement demonstrates that asking people to practise social distancing when drinking and socialising is just not going to control COVID-19 transmission in the high-risk context of entertainment precincts.

While the general issue of how the rest of Australia would respond to Victoria re-opening while there are still active cases demands its own articles, we have little doubt that they wouldn’t be enthusiastic about Victoria’s chances of successfully managing the COVID outbreak with licensed venues open.

Other states should also take note: should they suffer further outbreaks, sensible precautionary measures around on-premise alcohol service could protect precious community tracing resources and reduce the risk of another wave of infections.

Pub and bar owners will lose revenue if they remain closed. But enacting policies that effectively prevent spread right now will allow business to get back to normal sooner and could potentially prevent future shutdowns.

Premier Andrews is right to keep licensed venues shut as long as possible, ensuring that we can get Victoria moving again without sacrificing the hard work that all Victorians have endured during this long lockdown.

Peter Miller is Professor of Violence Prevention and Addiction Studies at the School of Psychology, Deakin University