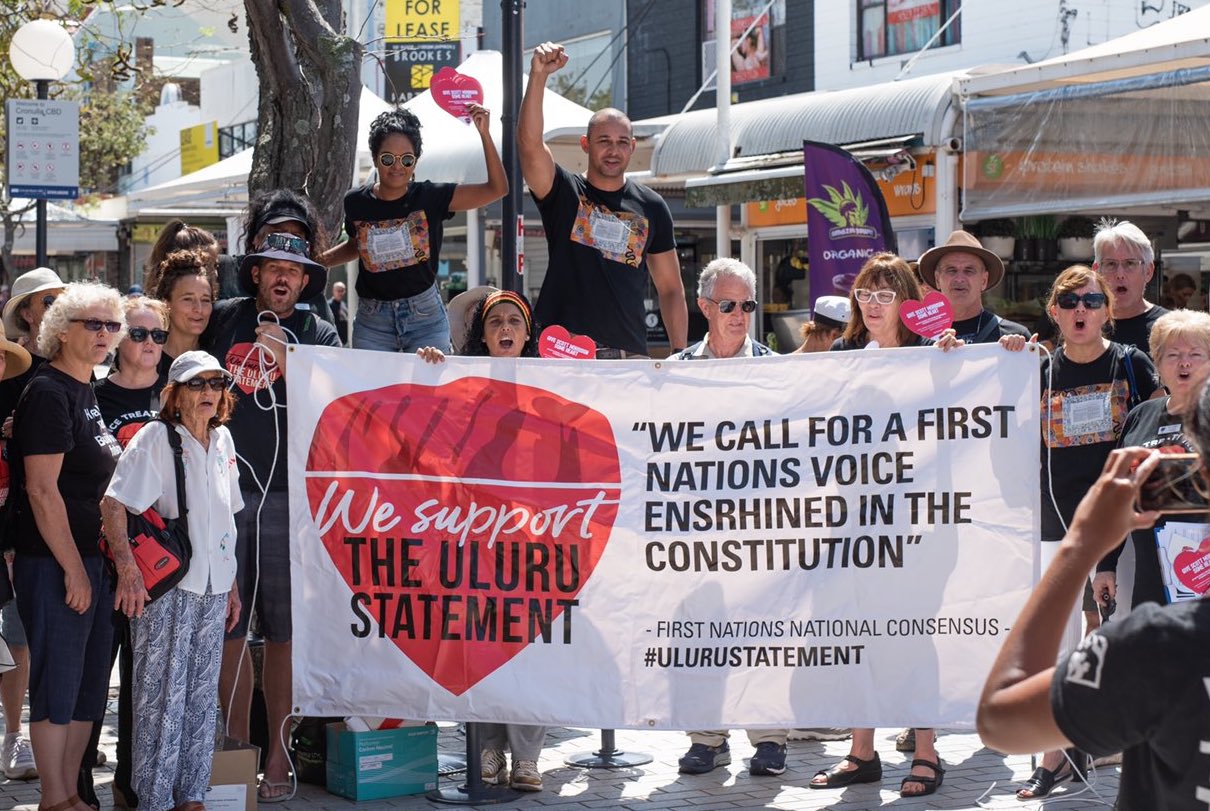 Organisational support vital for Uluru Statement from the Heart

This article was first published on March 25, 2020

Introduction by Croakey: Thomas Mayor is a Torres Strait Islander who was born on Larrakia country in Darwin. He’s a wharfie, an official of the Maritime Union of Australia, the National Indigenous Officer for the Construction Forestry Maritime Mining Energy Union, and a signatory to the Uluru Statement from the Heart. He was entrusted to carry the sacred canvas of the Uluru Statement from the Heart around Australia for 18 months, building a people’s movement to realise its vision. Here, he writes about why statements such as those of Croakey Health Media, released today, are important.

On 26 May 2017, the Uluru Statement was forged from the collective experiences of Aboriginal and Torres Strait Islander people from all parts of the southern sky. It considers the lessons from the past — all the broken promises, ignored expert recommendations and petitions left gathering dust unrealised. With the struggles of our Elders as guidance, the Uluru Statement invites the Australian people to help us establish a constitutionally enshrined First Nations Voice.

When the Uluru Statement from the Heart was first read in public in the small Anangu community of Mutitjulu, situated near the vibrant red heart of the continent, we had no money to run a campaign. But what we did have was more powerful than money. We had our truth, love and hope brought together in a wonderful consensus, both written and painted on a sacred canvas, imbued with Anangu Tjukurrpa (songlines); we had a vision for a better future.

In the three years that have followed the constitutional moment at Uluru, we have used the power of the Uluru Statement from the Heart to overcome the Turnbull Government’s almost immediate dismissal of our aspiration for a Voice. Led by strong Indigenous women like Aunty Pat Anderson, Professor Megan Davis, Teela Reid and Rachel Perkins, we gained the support of many organisations and we have built a people’s movement.

Gaining the support from organisations, whatever their core business, has been extremely important. The push for acceptance of the Uluru Statement requires people power to pressure the gatekeepers of constitutional change, the Australian parliament. A referendum can only go ahead once the parliament passes a referendum bill. With many organisations on board, we will quickly, efficiently and transparently build the people’s movement — together we can win a referendum.

I believe we have the ingredients that we need for constitutional change. Before we began the campaign, we achieved First Nations consensus through the Uluru Statement. This work has been done, and the invitation has been sent to all Australians. Now, the Uluru Statement campaign has many allies from across the political spectrum who are passionately supporting our call for a Voice referendum. We have the Australian Council of Trade Unions, the Greens, the SEARCH Foundation and the Australian Labor Party. We have regional councils, state and territory governments, peak bodies and major NGOs. We have the likes of BHP, Rio Tinto, Qantas, Woolworths Group and massive corporate law firms. Significantly, we have conservative parliamentarians and former High Court judges extolling the merits of a Voice, while debunking the misconceptions. The only ingredient we are yet to find is a prime minister with courage. This is Scott Morrison’s opportunity.

We have come a long way from complete dismissal, in late 2017, to a return to a hope of bipartisanship before the 2019 federal election. The proposal for a Voice has leapt each hurdle, stronger. But there is still a long way to go. The Morrison Government has appointed advisory groups to “co-design” a Voice model, though the leaked terms of reference for the Advisors restrict the group from recommending constitutional enshrinement and a Makarrata Commission to supervise a process of agreement making and truth telling to the nation — all three elements proposed in the Uluru Statement.

The Government’s opposition against to the three elements of the Uluru Statement is driven by just a few right wing members of the coalition. Their ideology is partly racist. It is also based on a deep seeded reluctance to do anything that will cause them to be held accountable for the harm done to Indigenous people. They are comfortable with the status quo, where failure — the continuing early deaths and impoverishment of Indigenous people — goes unpunished. They know that when Australians hit the ballot box to vote, their woeful record in Indigenous affairs does not factor. Our democracy is flawed.

The Uluru Statement campaign is urgent. It invites the Australian people to walk with us to repair this costly flaw in our democracy. First Nations people are only 3% of the population, and even less vote because of impoverishment or where we live. It is a simple equation; we don’t elect the parliament, yet the parliament has the power to make special laws about us, too often detrimentally, using S51xxvi of the Constitution, the race power. This flaw in our democracy is the root cause of all our issues — health, employment, quality of life — so, we need an enhanced Voice to parliament. It is how we close the gap. It is the form of recognition we want and need.

If you’re part of an organisation that hasn’t yet supported the Uluru Statement, I invite you to read the Uluru Statement and the Referendum Council report. In the report is the evidence of the dialogues and explanations of the history of the struggle.

The Uluru Statement campaign (www.ulurustatement.org) will also want your organisation to be ready to make submissions to the co-design process. In those submissions, we must clearly demand that the First Nations consensus in the Uluru Statement is respected, and the establishment of a First Nations Voice enshrined in the constitution is pursued by the Government with courage. Use your organisation’s experience to make the case nuanced and impossible to ignore.

We can only achieve our vision of a better future for our children by campaigning together.

Join our list of organisations, publicly supporting the Uluru Statement from the Heart:

This list is not fully up to date. If your organisation has endorsed the Uluru Statement and is not included in this list, please email thomas.mayor@mua.org.au

PrevPreviousWe need to change our thinking and communication, urgently, to beat COVID—19
NextAt a time of pandemic threat, where is the national leadership on prisons?Next