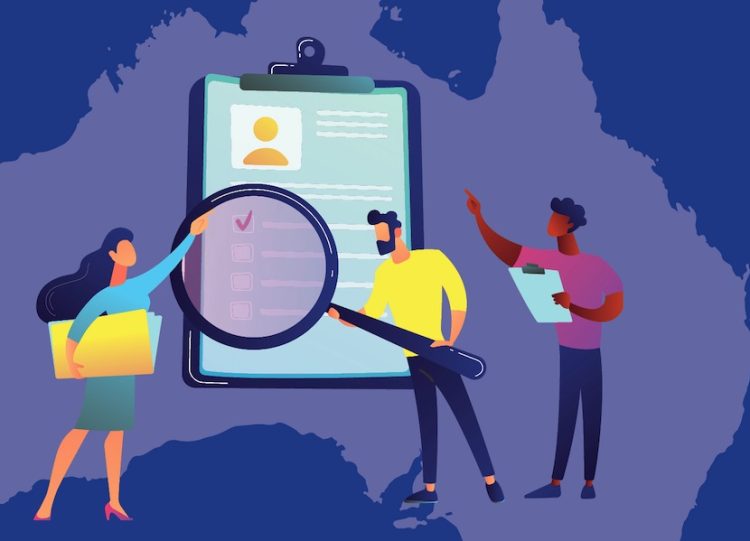 The 2021 Census has some critical gaps that raise important health concerns, according to Nicky Bath, CEO of LGBTIQ+ Health Australia, which is holding a webinar on Monday, 2 August to examine how to improve data collection for LGBTIQ+ communities (register here).

The Census, to be held on Tuesday, 10 August, is described by the Australian Bureau of Statistics as one of its “largest and most important statistical collections”.

How many people in Australia are lesbian, gay, bisexual, transgender, intersex, queer or otherwise sexuality or gender diverse (LGBTIQ+)?

The truth is, we still don’t know. And that’s profoundly distressing for those who are invisible and forgotten. For LGBTIQ+ Health Australia (LHA), which promotes the health and wellbeing of LGBTIQ+ communities, it’s an acute and potentially life-threatening problem.

The Australian Census – held every five years and due again on 10 August 2021 – does not yet ask about sexual orientation, gender identity and sex characteristics. This is fundamental demographic data that is not captured about a significant part of Australia’s population – more than ten percent, based on an estimate by the Australian Human Rights Commission (HREOC).

From the available research, our communities experience disproportionate rates of illness, especially mental illness. LGBTIQ+ young people aged 16 to 27 are five times more likely to have attempted suicide than the general population. Transgender people aged 14 to 25 are a shocking 15 times more likely. There is evidence of elevated rates of drug and alcohol use, higher rates of HIV and STIs, and a significantly higher cancer burden.

The majority of these adverse health outcomes are directly related to the stigma, prejudice and abuse experienced for being part of LGBTIQ+ communities. Discrimination also impacts negatively on access to high quality services, such as for aged care, family violence, homelessness and disability.

Implications for policies and services

This is all compounded by being uncounted and under-counted when services are planned and funding allocated.

LGBTIQ+ people are identified as a priority population in many national health strategies, but too often governments lack essential data to set targets, measure outcomes, allocate budgets and develop effective responses for the specific vulnerabilities of LGBTIQ+ people.

Governments use the Census to deliver services based on evidence and need. We at LHA and other community-controlled LGBTIQ+ organisations need the data to demonstrate the case for targeted funding and policy.

That’s why LHA led a campaign in 2019 and 2020 to include sexual orientation, gender identity and variations of sex characteristics in the 2021 Census. Over 140 organisations signed up with expertise spanning across mental health, suicide prevention, social services, disability, ageing and aged care, family violence, human rights and research. We secured cross-party support.

There is a strong international shift in comparable countries to collect this data. In March 2021, the United Kingdom became the first country to ask about sexual orientation and gender identity in its Census – without the sky falling in. Scotland will include questions on its next Census, deferred to 2022 due to COVID, and the United States and Canada are taking similar steps.

Despite the growing impetus for change, our campaign was unsuccessful this time and last year the Australian Government again set the 2021 Census without questions on sexual orientation, gender identity and sex characteristics.

It also confirmed a poorly framed question on ‘sex’ that will be confusing and alienating for many people. Alongside options for ‘male’ and ‘female’, people will be able to select ‘non-binary sex’. ‘Non-binary’ does not adequately account for people born with intersex variations and for trans and gender diverse people, ‘non-binary’ is about gender not a response to the ‘sex’ question.

This question will not provide any useful or adequate demographic data about LGBTIQ+ populations. LHA believes that data on the ‘non-binary sex’ option should not be used or reported. It will at best be meaningless; at worst it is an opening for some to trivialise and stigmatise some of the most disadvantaged members of our communities.

Despite that, we urge all Australians to engage with the Census and answer questions as best they can, based on the ABS guidance. While inadequate, the Census remains essential information for health planning. We need it. Services need it. The government needs it.

We are also optimistic for the future, based on some indispensable progress that has been made for collecting health data.

In January 2020, the Australian Bureau of Statistics (ABS) completed a standard set of four questions which together can provide comprehensive demographic data for LGBTIQ+ communities. These are:

These questions are now being implemented across other ABS surveys and in some other data collection. LHA calls for wide-spread use of these standard questions and for them to be embedded, with any improvements over coming years, in all national minimum health datasets and adopted in the next Census in 2026.

We will keep campaigning, knowing that it routinely takes years to get a new question added to the Census. There is strong and growing support for change and most importantly a clear need for this data.

Everyone who is angry about not being counted can write to their federal Member of Parliament about the 2026 Census.

We also invite you to become a member of LHA so we can let you know when the consultation begins about questions for the next Census and involve you in our next campaign.

Please join LGBTIQ+ Health Australia at 1pm on Monday 2 August for a webinar about the Census. The ABS will join us to discuss the importance of the Census and how the 2020 ABS Standards can improve data collection for LGBTIQ+ communities. Register online here. 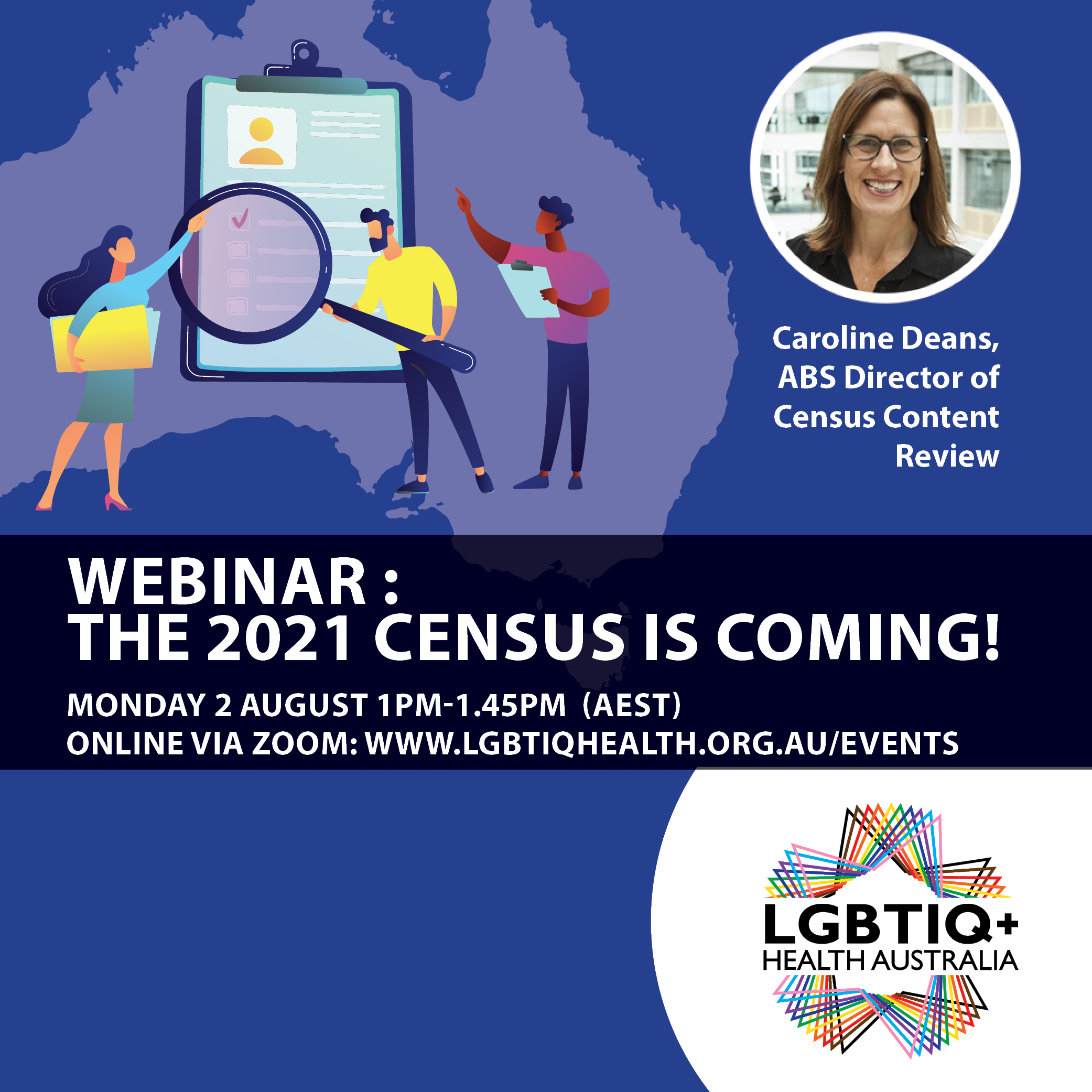 If this article has raised concerns, you can get help by contacting QLife between 3pm and midnight every day on telephone 1800 184 527 or webchat at https://qlife.org.au/resources/chat

See our previous coverage of health issues for LGBTIQ+ people.

If this article has raised issues for you, or if you’re concerned about someone you know, call Lifeline on 13 11 14.

PrevPreviousA plea to address misinformation around vaccination, for the sake of young people’s mental health
NextTo reform primary healthcare, we don’t need to reinvent the wheelNext