You may have heard the sound of corks popping on Twitter yesterday when news broke that the Federal Government has dropped planned changes to the Racial Discrimination Act that had been opposed by many public health experts and community groups and members.

On Monday night, Liberal MP Ken Wyatt told ABC TV’s Q and A program that he would be prepared to cross the floor to vote against the proposed RDA amendments because he knew the pain that racism causes.

He had told the party room, he said, that “a lot of you in here will never experience racial vilification; let me tell you that the pain of that stays with people, it scars them.”

Many have welcomed the launch of beyondblue’s new campaign targeting the sort of casual racism that too often goes unseen and unrecognised by those who do not experience it.

Yes, it’s great to have a mainstream organisation like beyondblue step up on this important health issue. But it would be even better to see much wider action across the health sector.

Hopefully, Stop.Think.Respect is only an entree in a much-needed national conversation, rather than the main meal. While it has drawn many positive comments (see some of the reaction at the bottom of this post), there remains a need for concerted efforts to tackle institutional and systemic racism.

beyondblue calls on Australians to Stop.Think.Respect.

For several weeks, Australian TV viewers might feel a bit uncomfortable when they see beyondblue’s new TV ad in the middle of their favourite shows.

We recently launched a confronting TV commercial as the centrepiece of the second focus in our Stop.Think.Respect. campaign, on what we have labelled ‘The Invisible Discriminator’.

The video shows several scenarios of subtle racism such asmoving away or not sitting next to an indigenous person, telling a racist joke, or questioning their morals or work ethic based on their race. While non-indigenous Australians might not be aware how frequently these situations occur, the scenarios are all too familiar for Indigenous Australians.

Aboriginal and Torres Strait Islander people are a priority population group for beyondblue. Almost one third of Aboriginal and Torres Strait Islander people experience high or very high levels of psychological distress, which is a risk factor for anxiety and depression. The latest Australian Bureau of Statistics figures from 2012 show this rate is nearly three times that of non-Indigenous people.

Experiences of racial discrimination in its many forms are strongly linked to poorer mental health, including a greater risk of developing depression and anxiety, substance use and attempted suicide.

In developing the campaign, we drew on a survey carried out for the VicHealth-led Localities Embracing and Accepting Diversity program. That research found that racism has a compounding effect on mental health, with 97 per cent of Aboriginal and Torres Strait Islander people surveyed experiencing incidents of racism multiple times. The survey also found that subtle forms of discrimination, such as being avoided or treated with suspicion are just as harmful to mental health as more overt forms such as verbal abuse.

We were also keen to complement rather than replicate previous campaigns such as ANTaR’s Racism. It Makes Me Sick campaign, or the current Australian Human Rights Commission’s Racism. It Stops With Me campaign. These organisations, along with representative bodies such as the National Community Controlled Health Organisation, the National Congress of Australia’s First Peoples and Reconciliation Australia and others, helped us develop the campaign.

beyondblue commissioned market research last year, which showed that there was strong support for beyondblue to undertake this campaign. As a national organisation with 89 per cent brand recognition, we felt that the best way to improve awareness and drive behavioural change was to undertake a carefully targeted, multi-channel national campaign.

The campaign is also national because while there are some regional differences in attitudes towards different racial and cultural groups – as the Challenging Racism project has found – there is little variation in attitudes between urban and rural areas.

Drawing on research conducted for the VicHealth See Beyond Race campaign, we are targeting non-Indigenous men and women aged 25-44 with particular mindsets – those who believe they have egalitarian attitudes and who do not consider themselves to be racist, but who may engage in subtle acts of discrimination, believe negative stereotypes or make offensive comments.

The campaign builds on the launch of Stop.Think.Respect last year, which highlighted the impact of discrimination on the mental health of lesbian, gay, bisexual, trans and intersex people through the ‘Left-handed’ TV commercial and accompanying personal stories, which questioned ‘Why should I be made to feel like crap for just being who I am?’.

Initial feedback on the campaign has been overwhelmingly positive, and we will be measuring its reach and impact through an independent evaluation.

I’m confident that this campaign will have an impact, but clearly one campaign cannot achieve everything that is needed to address the effects of racial discrimination on the mental health of Aboriginal and Torres Strait Islander people.

Policy-makers and practitioners across the health sector all have a role to play. Multiple strategies across different settings are needed to create institutional, as well as interpersonal change. A diverse network of influential voices is also required.

For beyondblue, putting the issue of everyday racial discrimination squarely in the public domain and asking everyone to stop and think about their actions is an effective way to create a public discussion to trigger behavioural change.

Some of the reaction to the campaign on Twitter 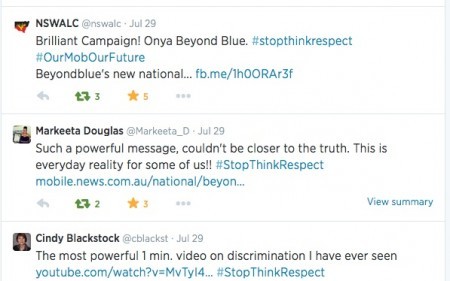 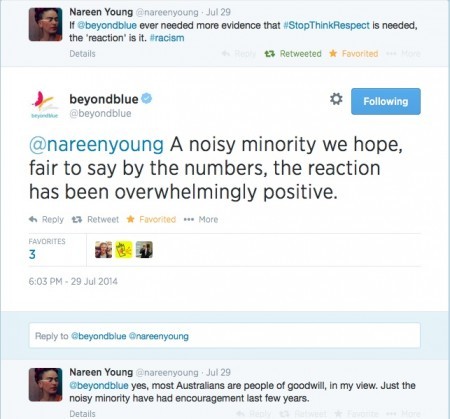 PrevPreviousWhat is an ethical response to the “torture” of immigration detention?
NextFor patients to be informed & empowered, they need access to medical recordsNext