This article is the first in a series of three from the Aboriginal Medical Services Alliance NT (AMSANT) covering its Our Health Our Way Conference 2014 held recently in Alice Springs. 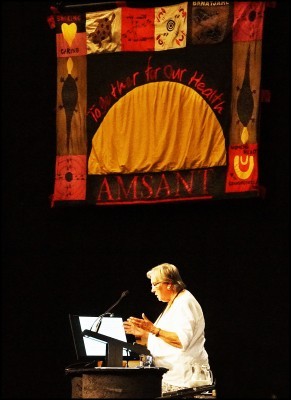 1973 was an unusually wet year in Central Australia. Staying dry without shelter was a major challenge, until an organisation started renting out tarps for 50 cents a week. It was not the housing department, nor an NGO (non government organisation), but the Central Australian Aboriginal Congress, a newly formed health service.

Earlier that same year, over 100 Aboriginal people from around Central Australia had met in Alice Springs to discuss the poor living conditions and health problems facing Aboriginal people living in the centre. The result of this meeting was Congress – the first Aboriginal Community Controlled Health Service in the Northern Territory.

Donna Ah Chee, the CEO of Congress explains: “The Aboriginal community set up Congress. It was not an act of government, or any welfare agency… We controlled it from the beginning and still do. In some ways we had no choice, our health status was very poor and the mainstream health system had completely failed us. We had to do something new and different to get access to health care”.

This kind of leadership was the focus of celebrations at the Aboriginal Medical Services Alliance of the NT (AMSANT) Our Health Our Way conference in Alice Springs in November this year, where 320 delegates marked 40 years of ACCHSs in the Northern Territory and 20 years of AMSANT.

While Marion Scrymgour is best known for her political career, she has been involved with ACCHSs since 1993 and is AMSANT’s current chairperson: “It started with Congress and now we’ve got quite significant players on the landscape. There have been major achievements by Congress, Danila Dilba in Darwin, Wurli Wurlinjang in Katherine, Anyingingi [Tennant Creek]… All of us have played a role, not just in getting the necessary financial support, but in the policy debate on a national level.”

AMSANT was formed after a meeting at the Red Centre Resort over three scorching days in 1994. ACCHSs from around the NT needed a vehicle to voice their frustrations with severe under-funding from ATSIC and a lack of recognition by the NT Government. AMSANT’s first press release outlined ACCHSs’ three priorities: improved training and conditions for Aboriginal Health Workers, greater community control, and more resources.

To release funds, AMSANT advocated for responsibility for primary care to be transferred from ATSIC to the Commonwealth Health Department. “It may be simplistic, but to create some order we needed to make the Commonwealth Government totally responsible to us for expenditure on primary health care”. Pat Anderson AO was the CEO of Danila Dilba in Darwin at the time, and helped spearhead this first successful campaign. The transfer has resulted in a trebling of funding to ACCHSs since the ATSIC era.

AMSANT continues to work in partnership with all levels of government. Community control is now represented at the highest level health planning forums in the NT, ACCHSs have access to MBS and PBS and Commonwealth funding for Aboriginal health is close to $1 billion.

These achievements can be seen on the ground, with the recent rapid life expectancy gain among Aboriginal people in the NT. Over just three years from 2006-08 to 2009-11, the life expectancy of Aboriginal women living in the NT increased by 2.1 years. For men it was even higher, at 2.3 years.

But these gains have plateaued.

Health system improvements over the last 40 years means that Aboriginal people in the NT are surviving into middle age and beyond, but people suffer a high burden of illness. Improving health systems alone cannot completely close the gap. We must ensure sustainable access to well-funded health services, while working to improve the living conditions which cause illness in the first place.

ACCHSs have long recognised the importance of living conditions on health. The Tent Program of 1973 was just the start. Long before the language of social determinants of health, ACCHSs were clear about the connections between control, land, culture, employment, education, housing and health. 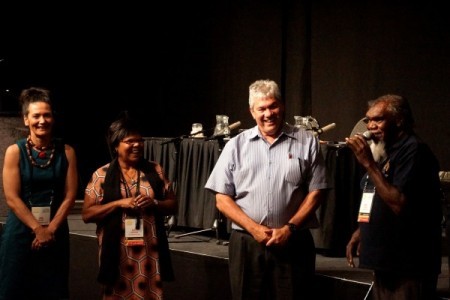 Forty years later, that commitment remains.  At Our Health Our Way, Congress was praised as one of the best examples of comprehensive primary health care in the world. As well as medical services, it provides alcohol services, youth outreach, culturally appropriate women’s and men’s services, and education and training. It has recognised that the challenge for Aboriginal health is no longer high infant mortality but healthy childhood development. It hosts the Alukura Grandmothers and Aunties Program, where elders share their parenting knowledge, provides childcare and runs the Australian Nurse Family Partnership to support women through pregnancy and motherhood.

Congress is just one example. Our Health Our Way showcased many other ACCHSs from around the NT that provide culturally safe, community driven, comprehensive primary health care. (Over the coming weeks videos of conference sessions will be available on the AMSANT website.)

If we are to continue to close the gap in the NT, we need to support ACCHSs. We need Aboriginal Community Controlled comprehensive primary health services, now more than ever.

—————-
To celebrate the 40th anniversary of Aboriginal Community Controlled Health Services in the NT, as well as the 20th birthday of AMSANT, CAAMA took a look at the long and empowering journey up to the present day. 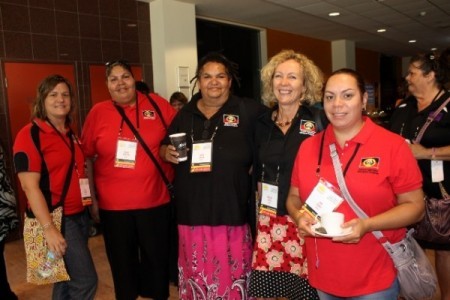 Bottom: Staff from Congress celebrate 40 years of their health service.

PrevPreviousWidening the gap: if they complain, who will hear them? On the loss of IRIS to remote communities
NextWorld Medical Association urges climate change action as PM Tony Abbott gets a timely Xmas giftNext