Home Croakey Conference News Service #HealthReImagined Our national shame: that so many Australians go hungry and without healthy food 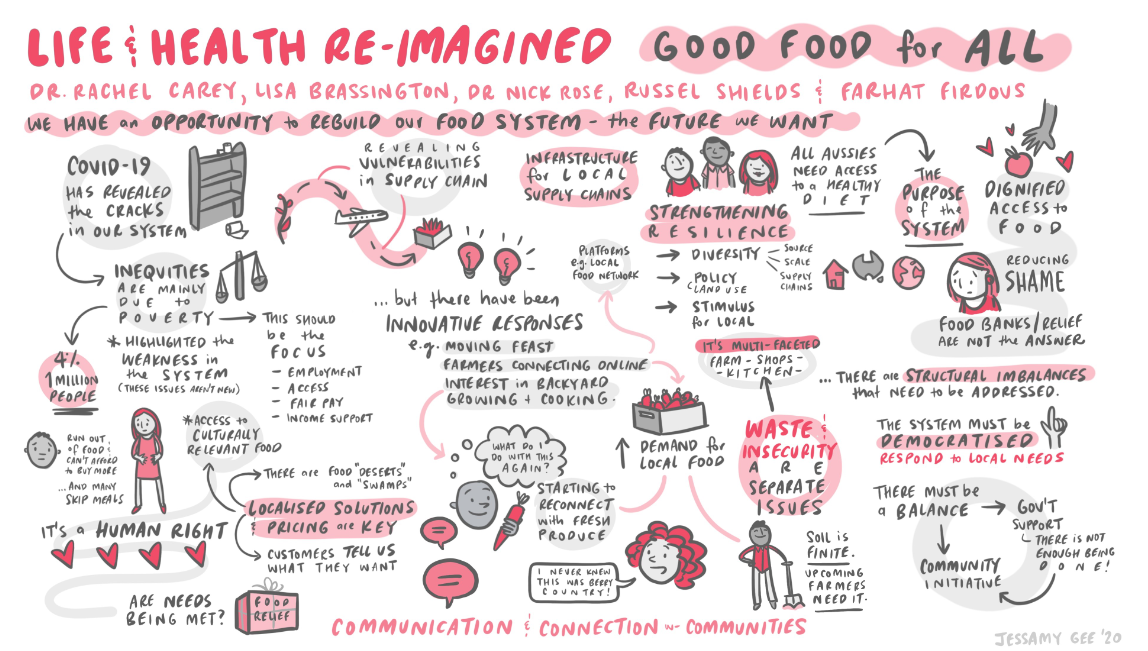 Our national shame: that so many Australians go hungry and without healthy food

‘Good food for all, how do we get there?’ was the topic this week at the second of five webinar events being hosted by VicHealth in its Life and Health Re-imagined series, which is looking at how we can best respond to and emerge from the coronavirus pandemic.

Marie McInerney is covering the series for the Croakey Conference News Service and reports on the latest event below.

You can bookmark this link to follow our stories, or engage or follow via Twitter at #HealthReImagined. Next week’s webinar, on Thursday 2 July at 2pm AEST, will discuss: Streets for people – Lessons from a return to local living. A paper written for the discussion and our preview will be published on Monday.

Rising rates of food insecurity in Australia will not be addressed without addressing structural barriers in our food systems, including the power of vested interests like supermarkets, the fast food industry, agri-industry and inadequate income support for many struggling households, according to a range of food system experts.

Speaking at a VicHealth webinar on Thursday, they highlighted many hopeful innovations that have emerged in recent years, and particularly in response to the coronavirus pandemic, that are helping to build food sovereignty, security and sustainability – such as the Cardinia Shire Council’s Food Circles Project and the Community Grocer.

However, they urged wider systems solutions too.

The panel was convened by Vichealth as part of its Life and Health ReImagined series, to discuss: Good food for all, how do we get there?

You can watch a full recording here of the one-hour discussion, moderated by ABC Radio host Virginia Trioli, and read the paper — Good food for all: Resetting our food system for health, equity, sustainability and resilience — written for the event by Dr Rachel Carey, Lecturer in Food Systems at the University of Melbourne, with Kirsten Larsen from the Open Food Network and Jodi Clarke from Ripe for Change.

During the discussion, panellists warned that food security issues will escalate in Australia if the Federal Government remains “hell bent” on scaling back Job Seeker and Job Keeper benefits later this year, shifting people back onto inadequate income support that left a million Australians unable to access enough quality food before the pandemic.

They also raised concerns that corporate and supermarket food waste is often excused because it may later be put towards often “second rate, past its ‘use by date’” food relief for struggling households.

As well, they warned that during pandemic lockdowns some culturally diverse Australians, in regional areas and metropolitan areas, could not locally source food they prefer and require, and would have had to breach restrictions to get them.

Farhat Firdous said the big and small scale farming practices of many Australians who were born overseas are also “an asset not fully explored (or) utilised” in Australia’s food system.

She pointed to the backyard growers in her region of people from Vietnam, China, and the Rohingya who have fled Myanmar. Lisa Brassington also flagged the benefits from “a boom of farmers that grow culturally specific crops and lifestyle needs”.

Not just about food but democracy

Rachel Carey opened the session with an outline of her co-authored paper, which warns that the coronavirus pandemic is testing the limits of Australia’s food system – the complex web of supply chains that bring food from farm to fork – “from struggling farmers, right up the chain to people experiencing food insecurity.”

See our preview for more, and this Twitter thread from the session.

Dr Nick Rose, executive director of Sustain, said it was critical to understand the causes and nature of the challenge to food security for all, not just in order to develop effective solutions but also because the issues went beyond food to democratic rights.

He and other panelists pushed back against a “provocation” from the moderator, ABC Radio’s Virginia Trioli, that it was best to focus on smaller, practical solutions – “on what’s achievable”. “I don’t think the power of the supermarket system is going to be broken anytime soon, I think it is a local response that will chip away from the bottom up [that will be effective],” she said.

Rose said it was wrong to “simply throw up our hands and say that politicians are all corrupt, corporations are too powerful, they’re too big, there’s nothing we can do, so let’s just focus on the micro, what we do in our own backyard, our own community”.

“Yes that will give us a sense of satisfaction and control over our own lives, but we effectively vacate the political space to powerful lobby groups and vested interests who are driving forward a very destructive and negative agenda,” he said.

Rose said the ‘kitchen table talks’ that he and Brassington were involved in for the Cardinia Food Circles project were an example of democratisation, and led to the Community Food Strategy which Brassington said recognised the need to also address the food system from a health, not just economic or agricultural perspectives.

See also this earlier Twitter thread on global issues from Sustain, while tweeting at @WePublicHealth, which says COVID-19 is “a wake-up call for food systems that must be heeded”, given that the systemic weaknesses it has exposed will be compounded by climate change. 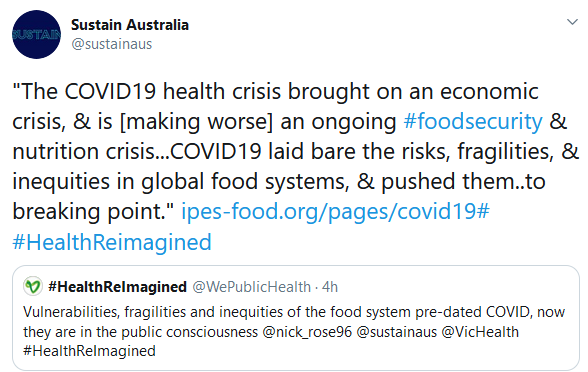 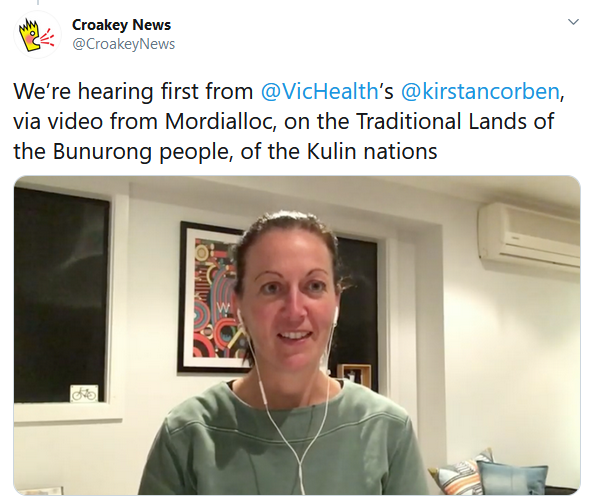 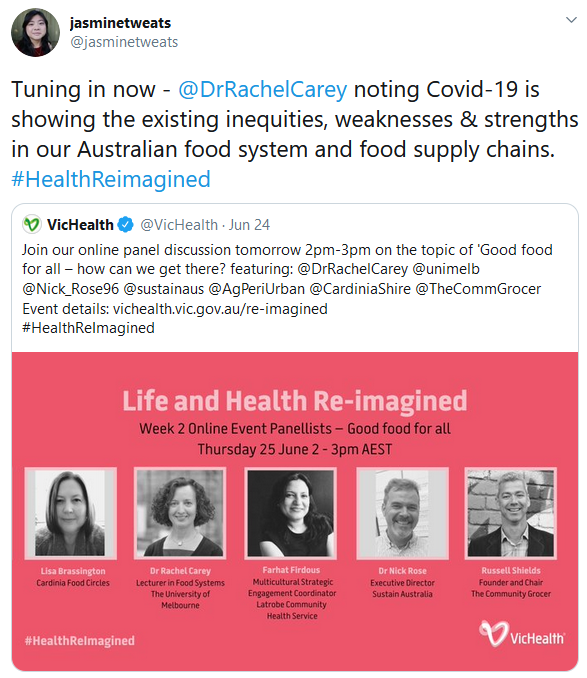 Poverty is at the heart of food insecurity

While many food relief organisations struggled because of lower corporate donations and volunteers lost to social distancing requirements, Rachel Carey said poverty is at the heart of food insecurity, and thus welfare payment levels need to address that.

The panel agreed that many Australians on welfare have done better through the pandemic because of higher welfare support under the doubled Job Seeker, which the Federal Government may cut from September.

But many more who have lost work have joined their ranks and, said Farhat Firdous, others were denied access to income support, including around 120 international students in her area and refugees on temporary protection visas. 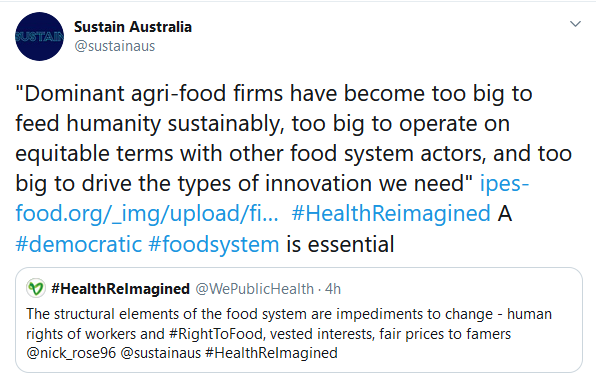 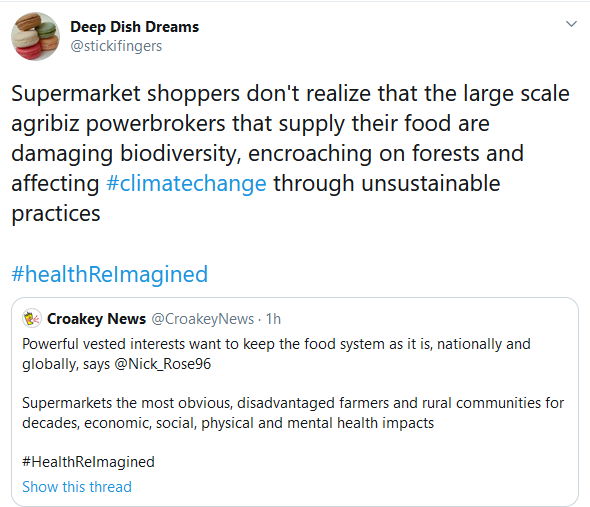 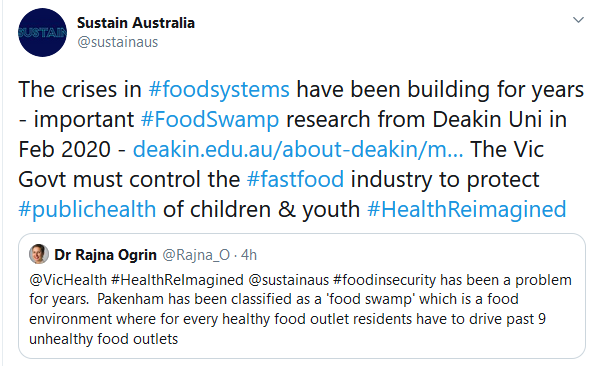 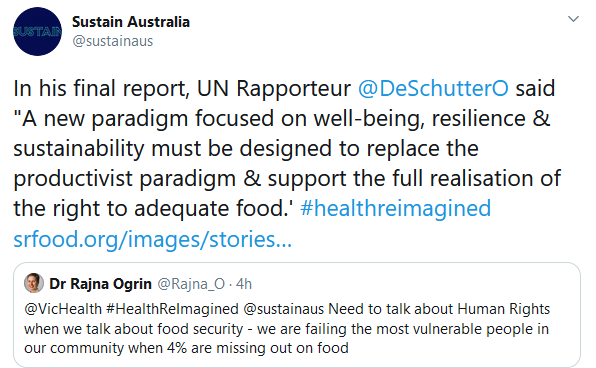 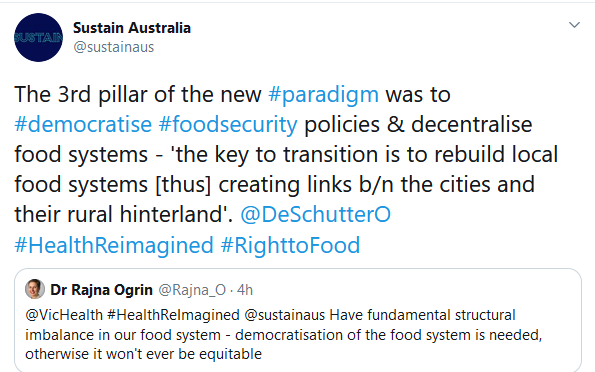 Waste is not a food relief strategy 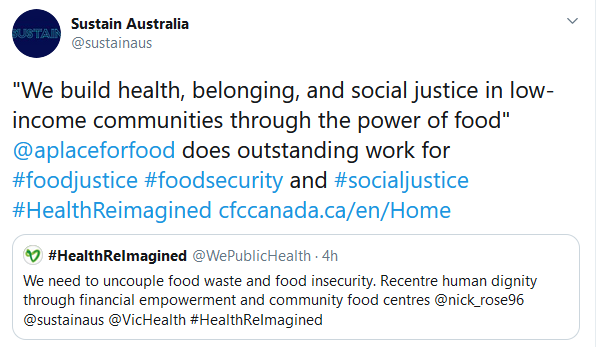 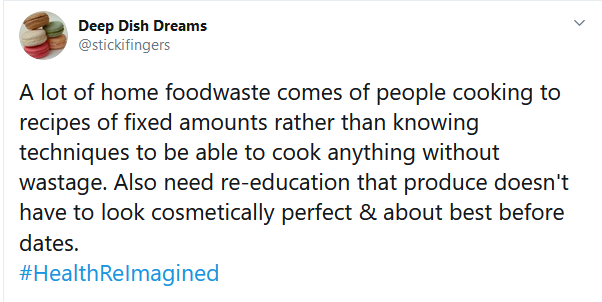 The shame (and disgrace) in hunger 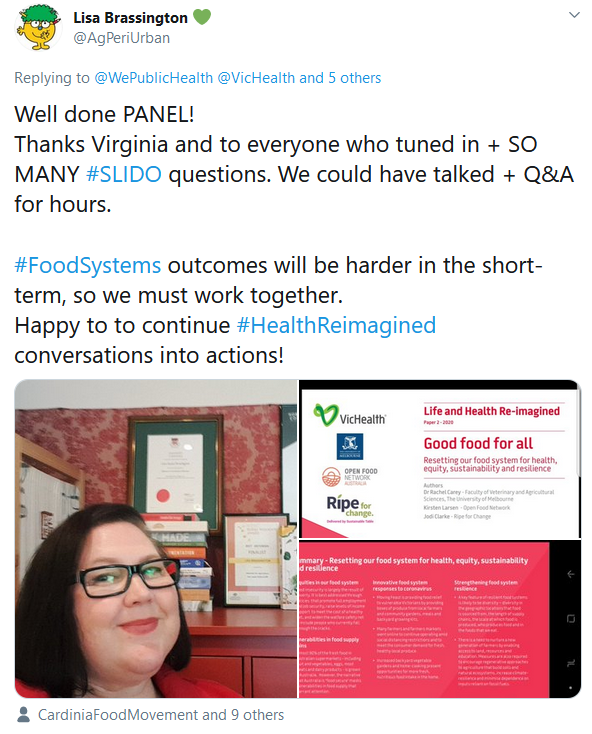