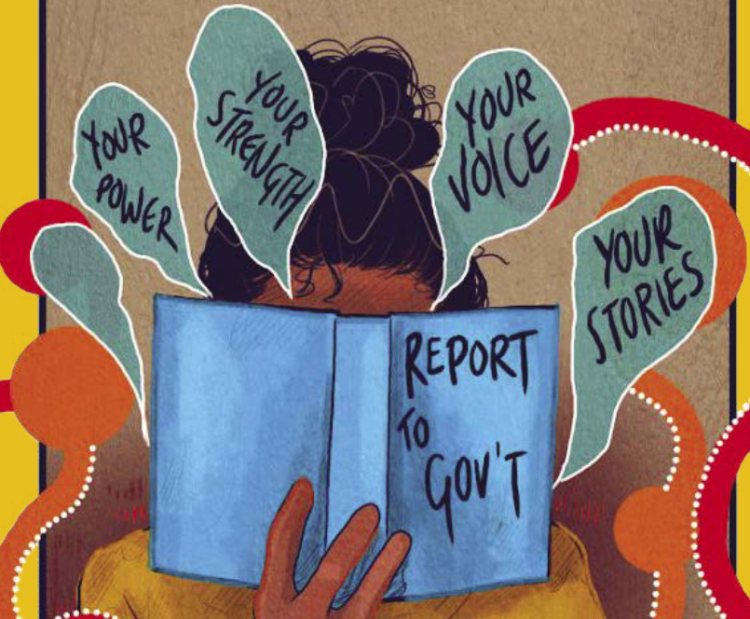 Image from the Our Youth, Our Way report

Our youth our way: transform the youth justice system for Aboriginal children

Introduction by Croakey: The Australian Council of Social Service (ACOSS) and all its state and territory affiliates today sought to amplify longstanding #RaiseTheAge calls by justice and health groups for Commonwealth, state and territory governments to raise the age of criminal responsibility from 10 to 14 years of age.

They said in a joint statement that if the Federal Government is truly committed to Closing the Gap, it needs to show leadership on this crucial issue “which is causing immense harm to the health, wellbeing and future of children”, and particularly Aboriginal and Torres Strait Islander children.

The call is also a central recommendation in the Our youth, our way report tabled in the Victorian Parliament last week by the state’s Commissioner for Aboriginal Children and Young People, which finds systemic racism at the heart of over-representation of Aboriginal children in the justice system and ups the ante on change.

As well as urging Victoria to lift the age of criminal responsibility from 10 to 14 years, a new report from the state’s Commissioner for Aboriginal Children and Young People has called for legislation to “prohibit children under the age of 16 years being sentenced to, or remanded in, youth justice custody”.

The Our Youth Our Way report led by Commissioner Justin Mohamed calls for a transformation in the youth justice system in Victoria, saying Aboriginal children and young people and their communities “have been targeted by the state in an unbroken chain of harmful interventions since early colonisation”.

That had been known and acknowledged for years, the report said, yet “a culture of over-policing and surveillance, forced removal of children from their families, disproportionate youth justice system outcomes and adverse experiences persist”, producing a weight of trauma that was “palpable” in many of the children and young people spoken to by the Commission as part of its inquiry.

It was time to “dismantle the institutional racism” that sits behind the system, said Mohamed, a Gooreng Gooreng man, of findings that will resonate nationally, amid concerns that new Northern Territory and Queensland youth justice approaches will see the already high number of Aboriginal and Torres Strait Islander children behind bars “skyrocket” and work against the findings of the Don Dale Royal Commission.

Our Youth Our Way states clearly that over-representation of Aboriginal children in Victoria, who are ten times more likely to be in custody than non-Aboriginal children, is not about their behaviour but rather “cannot be disconnected from Australia’s racist history of systemic oppression, dispossession and discrimination”.

Neither is the distribution of advantage and disadvantage a result of “happenstance”, the report says, but has been “built upon the dispossession of Aboriginal people” in which the criminal justice system historically has been employed as an instrument.

Launching the report via webinar to fellow Child and Youth Commissioners across Australia and New Zealand, Mohamed said the report’s 75 recommendations were “bold and courageous”, including its goal that “no child or young person should be in custody”.

“Some people may say we’re aiming too high, but I don’t think we’ve ever aimed high enough for our young people,” he said.

Victoria’s Principal Commissioner of Children and Young people Liana Buchanan said the report provides “an unflinching account of the legacy of colonisation”, and finds a number of drivers that contribute to over-representation: laws and policies that increase criminalisation, including a “very low age” of criminal responsibility; and bail laws that drag children and young people into custody “long before they’re sentenced”.

It also found “systemic discrimination and racism” contributing to everything from disengagement from school to approaches to policing, insufficient investment in culturally informed strategies to support and nurture Aboriginal families, and an out-of-home system “that sadly doesn’t provide the safety, security and advocacy that a good parent would, despite what the law requires”, she said.

While the potential for transformation of the system provides much to be excited about, Buchanan said there was a lot in the report “to be angry about, and for a non-Aboriginal person like me, a fair bit to feel ashamed about”.

Its litany of statistics and injustice include:

The inquiry and associated Koori Youth Justice Taskforce project examined the cases of nearly 300 children who were involved in Victoria’s youth justice system between 10 October 2018 and 31 March 2019. Case planning was conducted for 69 children, and regional forums were held in 13 communities. The Commission’s independent inquiry interviewed 93 children, and met with 15 Aboriginal youth groups.

Urging that culture and Aboriginal community controlled organisations be central in responses, the report calls for measures to minimise police contact, strengthen legal support, create a presumption of diversion, improve bail, reduce the unnecessary use of remand, and shape a justice system that focuses on prevention and early intervention at every stage.

Specific recommendations include the creation of 24-hour bail support and new ‘home-like’ bail and remand residences with therapeutic and cultural support.

The report is particularly damning on the nexus between child protection and the justice system, finding that most Aboriginal children and young people under Youth Justice supervision in Victoria have also experienced Child Protection involvement.

It says this creates a “moral imperative” for the Victorian Government and its agencies to “immediately close off the pathways to the criminalization of Aboriginal children and young people in care” and says the current residential care system not only “often fails to provide a caring home” but puts young people “at an unacceptable risk of harm”.

Child Protection “appeared to abdicate its responsibilities when a child or young person in its care became involved in the youth justice system”, including not attending court when the child or young person had a criminal matter, which can “significantly impair” the court’s efforts to address the causal factors behind the alleged offending, it said.

The report said the Commission heard of cases in which Child Protection opposed bail for children and young people for whom it had responsibility, in some cases suggesting that it needed more time to organise appropriate housing and support and in others arguing that “custody was the safest place for the child or young person”.

It also raises serious allegations about police regarding racial profiling and abuse, saying the cautioning rate for Aboriginal children in Victoria declined from 14.6 percent of outcomes in 2008 to under four percent in 2015 and that more than 70 percent of young people consulted “spoke about racism, mistreatment or violence by police”.

Some of those were “extremely serious allegations of racial, physical and sexual abuse” and needed to be reviewed by an independent and properly mandated body with specialist knowledge and expertise in relation to children and young people, the report said.

All systems must respond

However, Mohamed said the inquiry made clear it was not only the justice system or the police that needed to be transformed, but many other areas that also fail to play their part, including housing, education and health.

He said one of the aunties he had spoken to during community consultations had said:

We need more support for families earlier, it’s not just all of a sudden that our kids are in court”.

Mohamed said implementation of the recommendations would take “very brave and robust conversations” but he believed Victoria was in a good place to do so now, with a number of major initiatives underway, including a First Peoples’ Assembly, Treaty process, the Yoo-rrook Truth and Justice Commission and the development of a new Youth Justice Act.

But it was critical to keep up the momentum because it was so easy to “go backwards”, he said, referring to concerns that the Northern Territory Government has abandoned the critical recommendations of the Royal Commission into Don Dale.

Watch a video outlining the report: 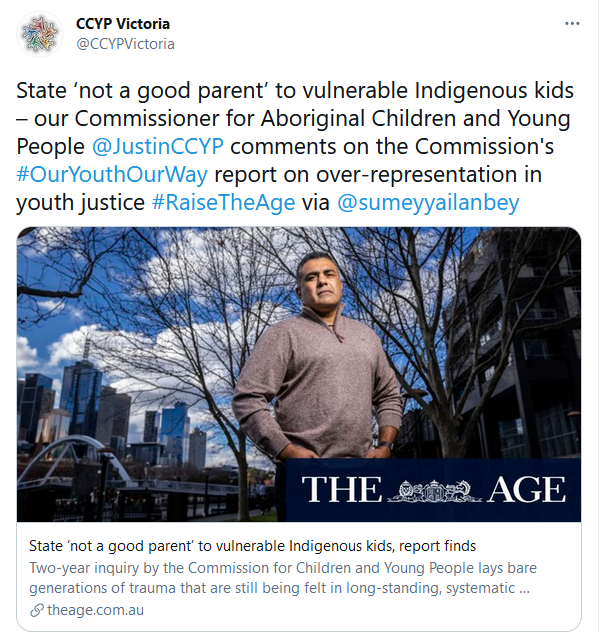 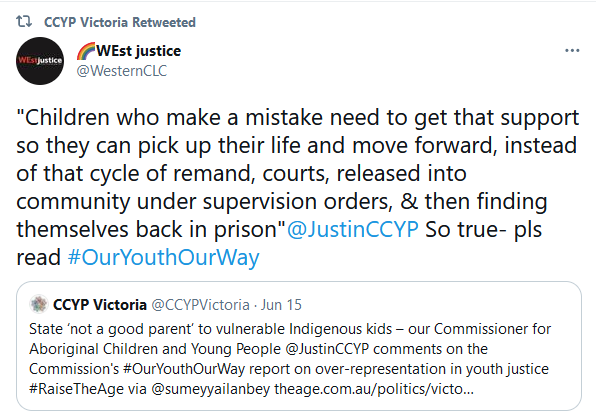 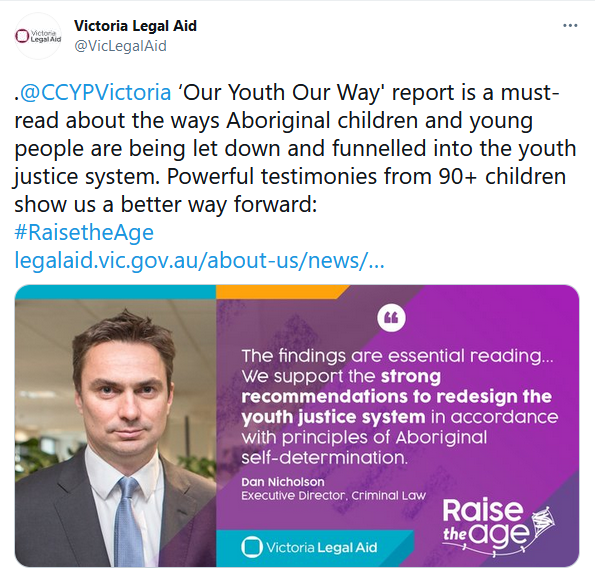