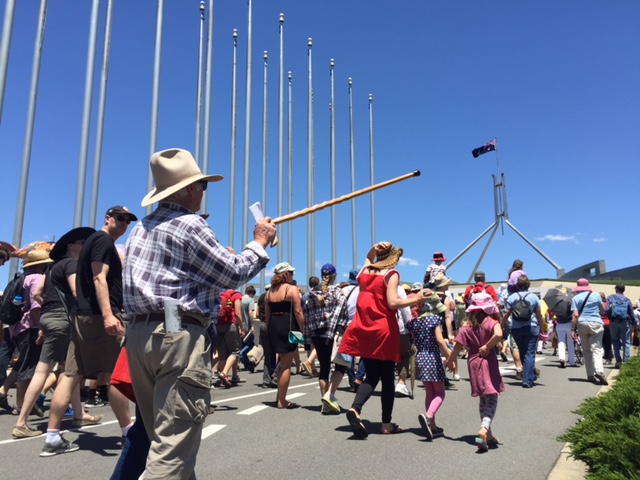 Out of step? reflections on the benefits of marching for climate action (& some tips & a poem from the Marshall Islands frontline) 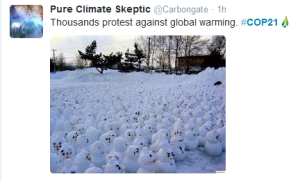 Hundreds of thousands of people participated in #PeoplesClimate marches across the globe in the lead-up to this week’s Paris climate talks, including from across Australia. Such demonstrations always prompt questions, and often cynicism (and not just from perennial climate skeptics, see pic, right), about what they can achieve. Associate Professor Melissa Haswell reflects in the post below on why climate action is good for health and wellbeing.

Here’s a quick glimpse at the first few days of the talks, and  news about the creation of the Paris Pact on Water and Climate Change Adaptation to make water systems more resilient to climate impacts.. See also this Sydney Morning Herald report that more than 100 institutions controlling $US800 billion ($1.09 trillion) in funds worldwide have opted to make new divestments of at least some of their fossil fuel assets in the 10 weeks running up to the Paris climate summit, according to campaign groups 350.org and Divest-Invest.

And with deep disappointment, particularly from our Pacific neighbours, on Australia’s contribution so far in Paris, please see poet @KathyKijiner from the Marshall Islands recite from her climate change poem ‘2 degrees’.

A recent article in The Conversation (UK) entitled “Out of step: marching for climate justice versus taking action” poses the question, are the climate marches really effective or possibly counter-productive in advancing ‘real’ climate action? The article’s main point was important – that as a symbol alone, marching won’t stop climate change; people need avenues to take action in their everyday lives.

However, I wondered to what extent the marches should be evaluated by the difference they make to emissions reduction policies versus by their motivational and psychological benefits as peaceful collective expressions of hope and aspiration that we all need to stay strong on our climate action journeys?

The article posed an ‘outsider’ rather than an ‘insider’ view, and led me to reflect on what it meant to me to be involved in the global People’s Climate March as an academic, advocate and person. Like hundreds of others, I urged my university, public health colleagues, friends and family to march, while deeply admiring many public health colleagues who dedicated themselves more completely than I over the weeks of preparation. I honour the Lancet Commission on Climate Change and Health reports of 2009 and 2015 that identified climate change as the biggest health threat and opportunity of our time.

Like many, I am humbled by the front-liners – the Aboriginal, Torres Strait Islander and Pacific Islander people, young people and farmers who dedicated themselves to making the marches the best they can be in hopes of a turning point.

I disagree with the distinction between marching and action. Marching and finding voice are actions accessible to just about everyone. Some people do a little, some do a lot; some march and some do other things. Doing a little is better than doing nothing. Participating in whatever way focuses attention and builds self-efficacy to do more.

What must also be acknowledged is the thousands of nuanced debates and efforts big and small being undertaken every day among the marching Australians. These have manifested in some very important collective change processes, not only against climate change, but also against its drivers – coal, oil and gas. Planning proposals now receive hundreds of submissions from people aged 10 to 99, who know these fossil fuels need to stay in the ground to honour Australia’s promises in Paris. They also understand how mining projects planned within food bowls and water catchment areas will compound our descendants’ climate change struggles by further degrading our most important environmental health assets.

Many Australians feel deeply about our position in the climate change world – being among the highest per capita global emitters, while our governments enthusiastically approve ever vaster coalmines and simultaneously announce that we’ve met our meagre goals (with the help of creative accounting) in, as explained by Guardian Australia journalist Lenore Taylor, the ‘wonderful world of climate targets where less means more’.

This is a heavy burden on many people’s perceptions of who we are as Australians, most of whom deeply believe in justice. We value feeling proud instead of deep sadness, guilt and anger about our contributions to the suffering of vulnerable children in developing nations, and uncertainty for our own children. The negative health impacts of demoralising circumstances outside our control are only beginning to be understood.

I often ask people, including those involved in environmental organisations, and medical students and public health students I teach, ‘how often do you think about climate change?’ Increasingly frequent answers are ‘everyday’, ‘every hour’, ‘24/7’. The thoughts are never far away – they emerge on weekends, holidays, in nature, births, looking into a child’s eyes. Pure joy is harder to experience – and that’s not good for mental health.

Emotions that remind us of our role in climate change persist as signposts that all is not well with who we perceive we are and the values we’re living. They inter-mix with other frustrations and challenges in our lives. We can deal with such emotions by distraction, pretending it isn’t true; resisting with increasingly irrational opposites and attacking those who speak with knowledge. Ultimately these approaches fail, further fostering feelings of hopelessness and helplessness, or deeper cynicism and self-righteousness.

So, what actually helps is to face up to the reality and do something about it? Overcoming the barriers to bringing people together, having conversations, realising voice and collective capacity – feeling proud of culture, who we are and what we can do – are healthier ways to deal with the challenges we simply have to face.

Big marches require months of conversations, communications, coordination, commitments and alliance building. Finding hope and strength with people who care – identifying people we honour and admire, role modeling, talking to neighbours – are empowering actions. Marches celebrate the hard work that goes on everyday to pressure governments to listen and act, spread messages that educate and inspire, unite hearts with those suffering, rejuvenate elders in the movement and train future leaders.

Few people in the climate movement think for a minute that this is the end of the war on climate change – rather, it’s a new chapter. Moments of connection and celebration recharge the batteries for the long and frustrating haul of nuanced debate in contexts where politics and the dollar rule. Being elbow to elbow with one, ten, one hundred, one thousand, sixty thousand or more others, seeing faces from every continent and telling leaders to listen to the same message – keeps us all going for our kids and their kids.

If I can indulge in a few tips –

As 60,000 people in Melbourne sang together with Seed, Australia’s First Indigenous Youth Climate Network on Friday night, “from little things, big things grow” – taking heart that this movement to protect our planet has most definitely grown.

Acknowledgements: Huge thanks for insights from a presentation by Carol Ride, Psychology for a Safe Climate, and from the Aboriginal Family Well Being Empowerment Program.

Melissa Haswell is Associate Professor of Public, Environmental and Indigenous Health at the University of New South Wales. She is a member of Doctors for the Environment Australia, the Public Health Association of Australia and the Climate and Health Alliance, and tweets at @im4empowerment.

Women are the victims of climate change – and the keys to climate action – by Mary Robinson, former Ireland President and UN high commissioner for human rights, and Melanne Verveer, the inaugural US ambassador for global women’s issues.

PrevPreviousCommissioners call for action on Indigenous child protection, disability, family violence
NextCall to Australia to stand up to Big Pharma and demand kids lives are prioritised over profitNext