Indigenous and mainstream health, justice and social services across the country have united via the hashtag #saveFVPLS to condemn the decision to end funding, which amounted to less than $250,000 a year.

The decision, revealed on 25 November – the International Day for the Elimination of Violence Against Women – and to take effect end of June 2020, came amid a $3 million increase in funding for frontline services.

But there has been widespread condemnation at the loss of the funded advocacy role.

She said in a statement:

“Cutting their funding reduces the capacity of this essential body to coordinate and amplify Indigenous women’s voices to government on the crisis of family violence.

“The National FVPLS Forum supports our women and helps to keep us and our families safe.

“It is also a member of the Close the Gap Campaign, and we must ask how we can close health and wellbeing gaps when the organisations tasked with doing so are themselves under threat of closure.”

“Rips our voices out”

It’s another significant blow for the Family Violence Prevention Legal Services (FVPLS) which in 2015 lost status as a stand-alone program – the basis on which they had operated for the previous 16 years – under the then Abbott Government’s Indigenous Advancement Strategy.

“That puts a lot of pressure on our budgets and capacity to retain specialist staff. The uncertainty leading up to the decision also impacted strongly: we lost some staff and had to be very careful about how many clients we took on in case we couldn’t support them in the longer term.”

Yet again we are forced to fight to get our funding back. This not only drains our already limited resources. It rips Aboriginal and Torres Strait Islander women’s voices out of critical national conversations.”

The statement also quoted concerns from former Australian of the Year family violence campaigner Rosie Batty, who said the decision sent the message to the National FVPLS Forum that “we don’t want to hear you”, and from Labor frontbencher Linda Burney, who said she was “completely astounded”.

“It beggars belief that this would happen,” Burney said.

Defunding our Aboriginal peak bodies is a threat to our self determination and the ability to ensure culturally safe services are available for the community.”

Echoing the responses of many other groups across the country, the Australian Council of Social Service (ACOSS) and the state-based COSS groups described the Federal Government’s move as “dangerous and outrageous”, and compared the cost to government of such a small funding allocation versus the $35 billion directed towards income tax cuts.

The Morrison Government’s decision to defund this crucial organisation appears to be an attempt to silence services who every day provide vital support to women all over the country.

This is an inexplicable decision and must be reversed immediately.”

But on Wednesday, Wyatt defended his decision and announced instead that the $244,000 allocation for the Secretariat would be equally distributed across each of the 14 FVPLS providers “to enable them to be directly involved in a co-design process to determine the best approach to ensure the continued role of the National Forum”.

He said this would come on top of the additional $3 million over the next three years that would bring the Morrison Government’s support for frontline services to $75 million from 2020-21 to 2022-23 “to improve safety for women and children and provide better access to legal support”.

Suggestions the Government is attempting to silence the voices of women are incorrect.”

The Minister said an independent evaluation of FVPLS by a team from Charles Darwin University identified a number of issues that needed to be addressed collaboratively by the sector, including reforms to the National Secretariat.

On 13 November 2019, the National Indigenous Australian Agency (NIAA) advised FVPLS providers of the increased funding commitment and that the Government wanted to work jointly with the sector to consider alternative funding models for the National Secretariat beyond 30 June 2020.

On 5 December 2019, the Secretariat of the National FVPLS Forum indicated to the NIAA that they wouldn’t participate in that process.

On this basis, I have now decided that the Government will equally distribute the $244,000 allocation for the Secretariat across each of the 14 FVPLS providers to enable them to be directly involved in a co-design process to determine the best approach to ensure the continued role of the National Forum.”

NATSILS and the National FVPLS dispute the Minister’s conclusions about the evaluation, saying it recommended “that resources should be increased not defunded”.

NATSILS says it is “extremely concerned” by the latest development.

“We are seeking an urgent meeting with the Minister to discuss this announcement this morning,” Braybrook told Croakey.

Some of the reaction:

The Age: Indigenous funding cuts a breach of faith

Fair Agenda: Speak up against the defunding of First Nations’ survivor peak body 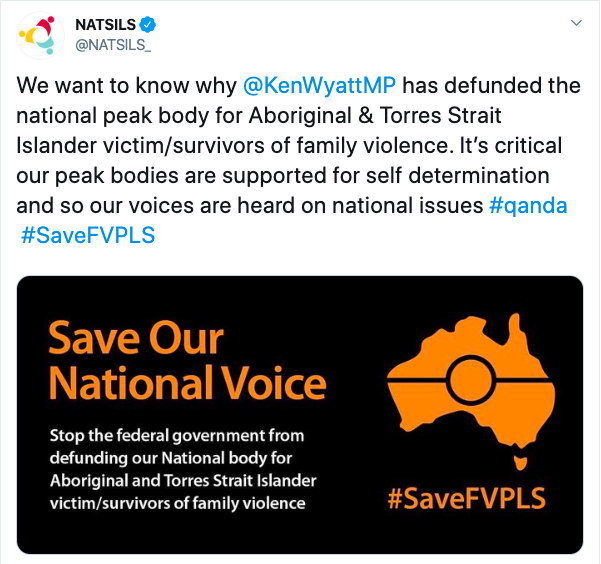 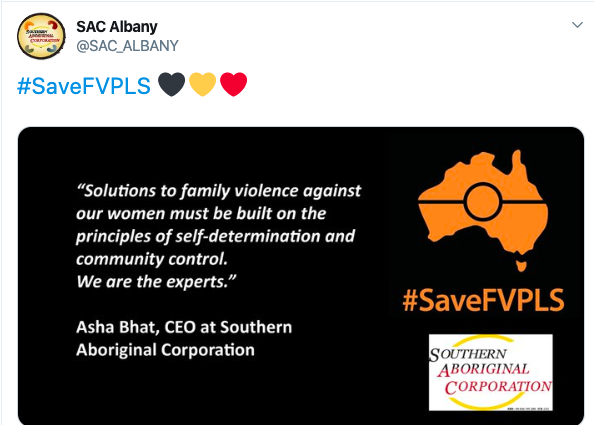 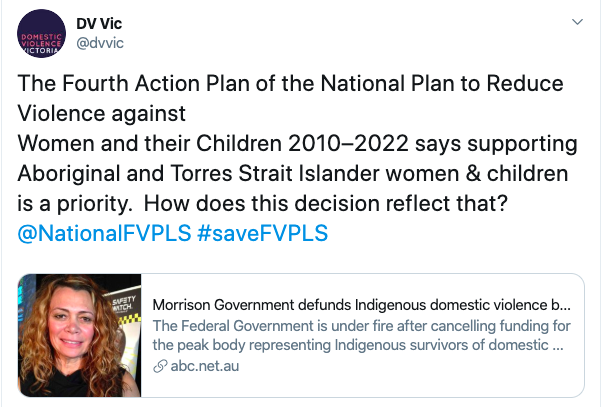 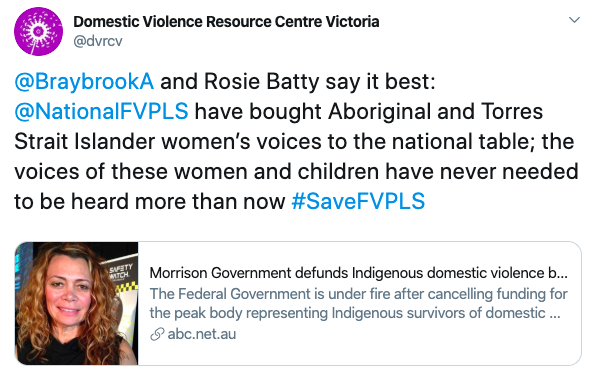 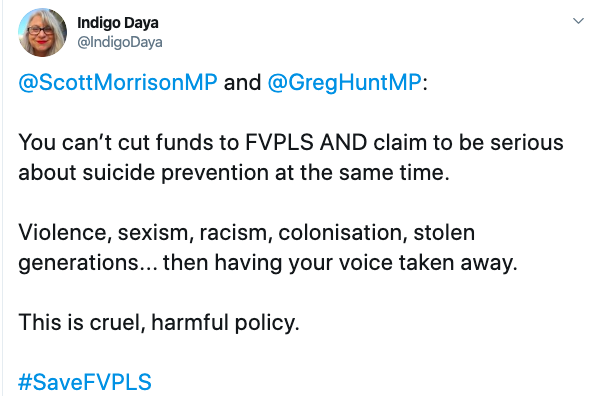 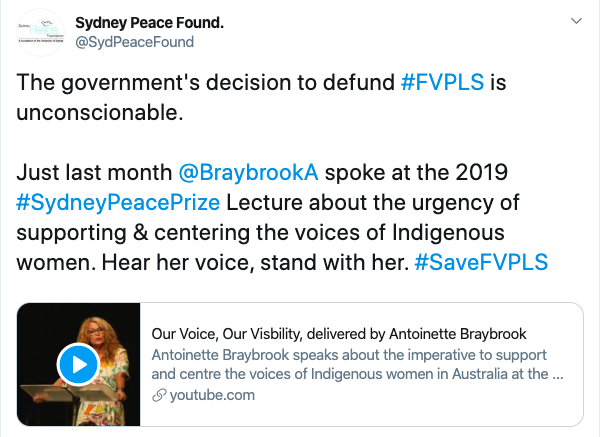 PrevPreviousWhat is the Pharmacy Guild of Australia and why does it wield so much power?
NextAs a public health emergency escalates, doctors urged to push for climate actionNext