In an interview at the National NDIS and Mental Health conference in Melbourne last week, Dr Gerry Naughtin, Strategic Advisor on Mental Health and Psychosocial Disability at the NDIA, said the NDIS was shifting from its early approach that “we’ll set up our system and you’ll need to come to us”.

What we’re understanding is that, for many people with psychosocial disability, often relating to a large government bureaucracy is at times traumatising and threatening.

So one of the issues we need to look at more closely is how do we outreach much more.”

Naughtin said the NDIA was “unapologetic” that its priority over the next 18 months was to make sure it reached the goal of signing up 64,000 people to psychosocial support (it currently has 35,000).

“We will not reach the 64,000 goal unless we reach out more to those who will be eligible but are unlikely to apply,” he said.

He highlighted recent outreach work done by the NDIA in Western Australia and South Australia, which resulted in three-quarters of people eligible for the NDIS who were living in psychiatric hostels signing up for the scheme.

A former CEO of Mind Australia, Naughtin was appointed to his NDIS role late last year, following growing concern that the scheme was failing people with severe mental health problems (or psychosocial disability) and putting many vulnerable people at risk of harm.

Early this year, Mental Health Australia was commissioned by the NDIA to conduct consultation workshops in Melbourne, Sydney, Perth and Townsville to look at how to address those concerns.

Mental Health Australia reported that because mental health was not in the early designs for the NDIS, many of the scheme’s fundamental design features were developed without reference to the needs of people with serious mental health issues. As a result, their experience of the NDIS has “frequently been a negative one, resulting in additional and unnecessary trauma and distress”.

Mental Health Australia then produced the NDIS Psychosocial Pathway Project report, which identified a series of ‘pain points’ under the NDIS for people with serious mental health issues and made a range of recommendations.

The report found that psychosocial disability differs from most other forms of disability, especially because it directly affects and is affected by the individual’s NDIS service experience.

As well, the psychosocial disability journey begins well before ‘Phase 1’ of the NDIA’s current pathway, meaning that assertive outreach, personalised NDIS engagement support, and resources for the community are required.

The report also found that the psychosocial skills, knowledge and experience of frontline staff are crucial, and that access, planning and review processes need to be consistent, fair and transparent.

Specialised planners and Local Area Coordinators will be employed to ensure participants have access to psychosocial expertise, and workforce capability will be developed through training and the establishment of teams that include mental health expertise to support people to engage with the NDIS.

The steam will also aim to strengthen the connection between existing mental health services and NDIA staff and partners, focus on recovery-based planning and episodic needs, and help people who are hard to reach to engage with the NDIA.

The package has been broadly welcomed by the mental health sector, and was hailed at the conference by Mental Health Australia CEO Frank Quinlan as a major achievement in advocacy.

But some delegates warned that the devil would be in the detail and the funding. “The money hasn’t even gone out the door yet,” one said.

National Mental Health Commissioner Lucy Brogden welcomed the reform package but warned that “the key to ensuring the participant experience is improved will be how soon changes can be made”.

At the conference Assistant Minister for Disability Services Sarah Henderson talked about the new stream, saying it acknowledged “a number of design problems” in the NDIS for participants with psychosocial disability.

We heard loud and clear from participants, advocates, and providers, many like yourselves in this room, like yourselves that the NDIS was missing the mark for people with psychosocial disability, and that we could do much better.

We consulted extensively across the country, where we heard about the experiences people with psychosocial disability have had with the NDIS – the good, the mediocre, and the frustrating.

This gave us critical information about what we were getting right and what we needed to improve.”

Outlining the features of the new stream, Henderson said the NDIA will be working more collaboratively with mainstream services like mental health, health and GPs, housing, justice, transport and social services.

She said the NDIA is also working with Mental Health Australia and Primary Health Networks to build a national system of navigation, linkages, and referral, to make sure people are connected with the right community supports and services. Read her speech here.

Next reforms for families, carers, pricing

Naughtin told Croakey that one of the “strong lessons” from Mental Health Australia consultations was that NDIS staff working to help people develop their NDIS plan “did not have sufficient knowledge of psychosocial disability”.

In response, the new pathway has significant new money for more staff and more training, with the Local Area Coordinators charged with outreach work, he said.

There were also strong calls to end the “experiment” of telephone interviewing and return to face-to-face meetings with NDIS planners, and not only for people with psychosocial needs, and for better information about the Scheme itself.

Naughtin said that over the next six months, the NDIA will look at other issues identified by Mental Health Australia, including being “more family and carer responsive” and responding to concerns that specialist mental health services have been priced out of the NDIS market.

Following its independent pricing review, the NDIA will address concerns that some providers, which previously received block funding rather than fee-for-service, were struggling to adjust their business models to operate under the NDIS, he said. See this report to the NDIA.

Naughtin said the NDIA wanted to look at whether “some specialist requirements” are required in the funding mix, though he said there may already be flexibility that organisations were not tapped into. He also suggested that need for such services might no longer be there in the same way.

“We’re not wanting to dumb down services, but it is also saying what is it that participants are looking for, not just what providers have historically provided,” he said. 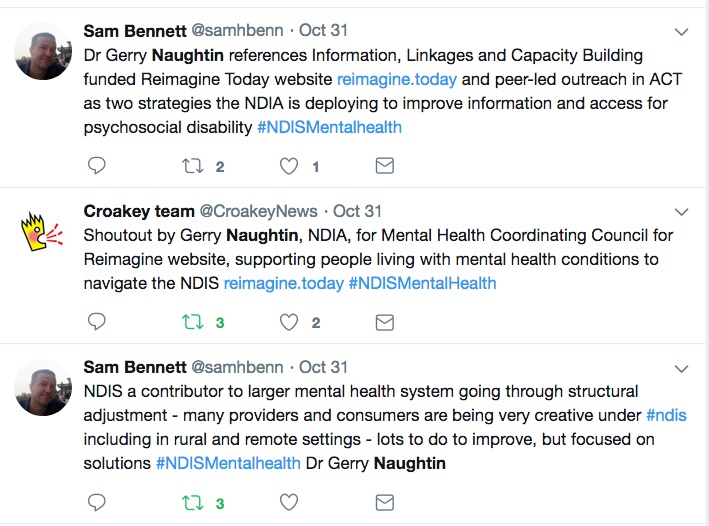 The Perth project (see this 2017 report on its early work) featured in one of the presentations at the conference. See more in these videos produced for the NDIS: here and here.

In one video, a psychiatric hostel manager says many residents were suspicious about the NDIS and government services, until they were given direct support and benefited from the services in their plans.

The project was trialled in five psychiatric hostels in the Perth Hills region, whose residents have ongoing, severe and persistent mental health issues, are often isolated from community, family and friends, and have very little choice and control in their lives.

The 12 month trial brought 110 people into the NDIS from an estimated 135 considered to be eligible.

The Mental Health Commission in WA has now partnered with NDIA and other organisations in a similar project to assist residents living in psychiatric hostels located in the Central North Metro and South East areas of Perth, which will come into the NDIS from July 2019.

Kerry Stopher, NDIA Director Community and Mainstream Engagement, told Croakey that more than 90 per cent of the residents from the initial project were still actively engaged with the NDIS.

With support, they were involved in a range of activities, from reconnecting with family, going to the library, learning IT skills or music, learning to take public transport to activities, taking up further courses or seeking voluntary or paid employment, she said.

Stopher said she expects most eligible people in the new catchment area will join the NDIS and develop a plan, as the project is fostering greater understanding of the scheme.

“We found in the first project that some people who did not initially want to join the NDIS, changed their mind when they saw the supports and independence that other people were achieving through the NDIS,” she said. 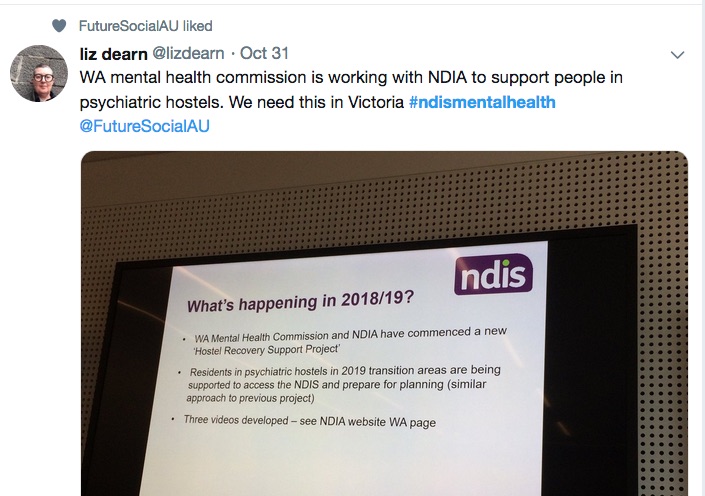 PrevPreviousRANZCO urged to apologise to first Indigenous ophthalmologist – and more news from #MovingBeyondTheFrontline
NextWhat will it take to bring real reform to juvenile justice in the NT?Next