Overcoming the barriers to social media uptake in healthcare

Last night, a diverse group (in both disciplines and locations) came together on Twitter to discuss the place of social media in health organisations.

The #hcsmanz discussion group included two pharmacists (one from Central Australia and the other from the UK), a medical educator from New York, a doctor from Perth, two medical students, an agency nurse from Perth, a public health researcher from Sydney, someone working in youth mental health, an environmental health scientist from Brisbane, a healthcare IT professional from Brisbane, and the director of research at a Victorian university. Canada’s Community Health Centres also dropped by for a short while.

This mixed group shares an interest in encouraging the use of social media in the health sector (for more about this group see this previous Croakey post).

You can read the transcript from last night’s tweet up for yourself, but the summary is that there are many barriers to wider use of social media in health care, and one step forward might be to develop a policy emphasising the positives, that could be adapted by health organisations to fit their needs. “Any policy should be written to the strengths of SM: speed and responsiveness, and its risks: speed and responsiveness,” noted one discussant.

It was also suggested that the #hcsmanz group could set up a library of social media policies from healthcare organisations to serve as exemplars.

Other snippets that may be of interest…

• resistance to change. One organisation trying to introduce Yammer (a tool described in this previous Croakey post) is meeting comments such as “Why can’t we use email?” “Seriously what happened to talking?” “I’m not interested in social media, it’s stupid”.

• attitudes to media generally and social media in particular. As one discussant noted: “Some organisations don’t even handle traditional media well. Will be hard to make the change to new media.”

Issues for organisations to consider

• who owns social media in an organisation? It shouldn’t be limited to PR/communications team but be seen as being owned by all areas

What are potential enablers?

The topic for the next tweetup is: social media tips to engage health professionals in sharing knowledge with ease.

Update: Ask and ye shall receive…or so it seems to go on Twitter.

In response to the suggestion for a compilation of social media policies in healthcare, @themetwo circulated this list of guidelines compiled by @EdBennett

And @hcsmanz circulated this pretty picture of the chat: 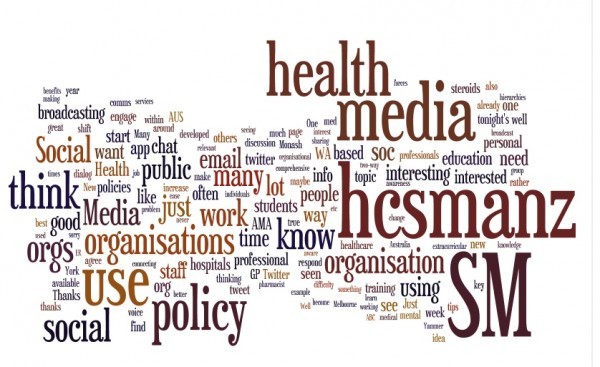 PrevPreviousHas the Food and Grocery Council kicked an own goal with its new report on marketing to kids?
NextAged care: a sector long overdue for reformNext