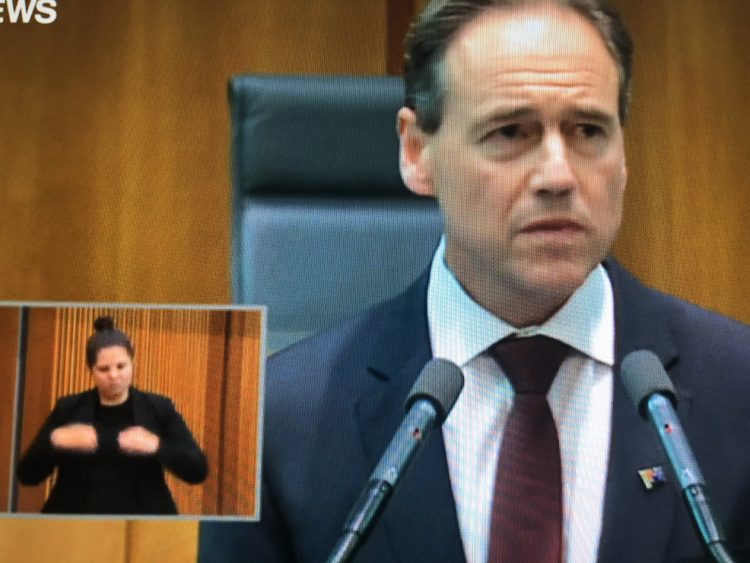 Health Minister Greg Hunt presenting an upbeat assessment, though others were more cautious

Pandemic drives an historic integration of public and private hospitals

Australia’s 657 private and not-for-profit hospitals will be integrated into the public hospital system during the COVID-19 pandemic response under an historic arrangement with governments that aims to boost capacity ahead of the expected surge in demand.

Health Minister Greg Hunt today announced that in exchange for governments guaranteeing their viability, private hospitals would make their resources available to the fight against COVID-19, including staff, facilities and equipment.

Private sector entities will be required to act as not-for-profit organisations for the duration of the arrangement, and also to open their books for audits.

The deal was warmly welcomed by Australian Healthcare and Hospitals Association chief executive Alison Verhoeven as “a very necessary and sensible move”.

“They’re to be applauded,” she told Croakey, referring to all parties involved.

“The whole arrangement is really good to see, state governments, the Commonwealth Government and the private sector agreeing to work together in a really coordinated way for the benefit of the community.”

It is another example of the pandemic driving integration and cooperation across the health system in ways that were previously inconceivable, following the population-wide rollout of telehealth.

Minister Hunt said the agreement meant private hospitals would contribute 30,000 beds and 105,000 full and part time hospital staff, including 57,000 nurses and midwives, to the pandemic response. The Commonwealth was budgeting on spending $1.3 billion on the arrangement but the figure was not capped and “if more is required, more will be provided.”

About one-third of the country’s ICU beds are in the private system. The pandemic response is seeking to increase the nation’s ICU capacity to 7,500 beds, up from the usual number of about 2,200, with Minister Hunt suggesting this would be sufficient to meet the highest possible demand.

As of this morning, 50 people with COVID-19 were in ICUs in Australia, with 20 on ventilators, he said.

Today’s announcement followed widespread anger last week that some private hospitals were continuing to schedule elective surgery, as well as threats from some private hospitals that they would be forced to close without government intervention. The Australian Medical Association had urged an end to public-private divisions.

Today Hunt presented an upbeat view of Australia’s progress in containing the outbreak, as well as the state of preparation for the inevitable surge of COVID-19 cases.

“We are in my view the best prepared country in the world that has seen any significant outbreak,” he said.

“We should be able to meet all possible contingencies, that’s planning for the worst case; what we are seeing is signs we will be far better off.”

Hunt said Australia was seeing “early promising signs” of the curve flattening, but added “we have got a long way to go; so let us not get ahead of ourselves”.

The Australian Health Protection Principal Committee (AHPPC) sent a cautious message in their 30 March statement, saying that Australia now had a clear narrative on the message to “stay at home unless doing limited essential activities”.

But it was not clear if compliance with physical distancing measures had reached a sufficient threshold to drive down transmission.

It is too early to say whether the small positive recent moves in the epidemiology curve are significant or will be sustained.

The biggest single concern remains the evidence of cases without an epidemiology link, suggesting community transmission with undetected cases.

NSW Premier Gladys Berejiklian also urged caution, telling a 31 March media conference that it was “way too early to make that assessment” about the curve bending.

She advised against reading too much into case numbers on a daily basis.

Berejiklian warned that “the real threat is people walking around without symptoms not realising they have this disease”, sounded the alarm on community transmission, and urged vigilance.

The Premier said doctors in areas of localised breakouts, such as Waverley and Bondi in Sydney, would be asked to increase testing; the expanded criteria for testing in NSW includes symptomatic people in areas of known to have community transmission.

NSW’s Chief Health Officer Dr Kerry Chant also urged caution in interpreting the drop in growth of new cases, suggesting that a reduction in testing may be involved.

While we await the promised release of the modelling informing Australia’s pandemic response, the New Zealand Government has released the modelling behind their strategy.

Speaking at the press conference with Minister Hunt, Deputy Chief Medical Officer Dr Nick Coatsworth, who until three weeks ago was director of infectious diseases and a clinician at Canberra Health Services, said ICU and emergency department staff had been working “quietly and diligently” over the past three to four weeks to increase their capacity, amid widespread distress at horrific images coming out of Italy and the US.

“I’m aware that colleagues in critical care, primary care and throughout the hospital system are under incredible strain at the moment, looking at a wave that is crossing other healthcare systems in a way that we couldn’t imagine,” he said.

He said 500 ICU ventilators were being fabricated by ResMed, backed up by 5,000 non-invasive ventilators, with full delivery expected by the end of April.

Coatsworth said a national ICU map was being developed, with units reporting daily on COVID-19 cases and bed and ventilator availability (a new analysis of the surge capacity of ICUs, in the Medical Journal of Australia, suggests that “national real-time monitoring of ICU bed capacity could provide a mechanism to rapidly redeploy resources to areas of need”.)

While Australia was doing relatively well on some indicators, Coatsworth said “now is not the time to take the foot off the pedal”.

Chief Nursing and Midwifery Officer Alison McMillan said the agreement with the private hospital sector meant job security for nurses and midwives, and would enable them to contribute to the response.

However, they would have to be flexible about where and how they worked, including in environments where they may not have worked before.

“The training will be there, and we are partnering with the states and territories to get those arrangements underway,” she said.

Today’s announcement raises many questions, including how to ensure how to ensure fair access for patients from rural, remote and regional areas and how to ensure equitable distribution of ventilators and other resources.

The map below, from the MyHospitals website, shows the distribtion of private hospitals; people outside of the metropolitan corridors have far less access to these facilities. 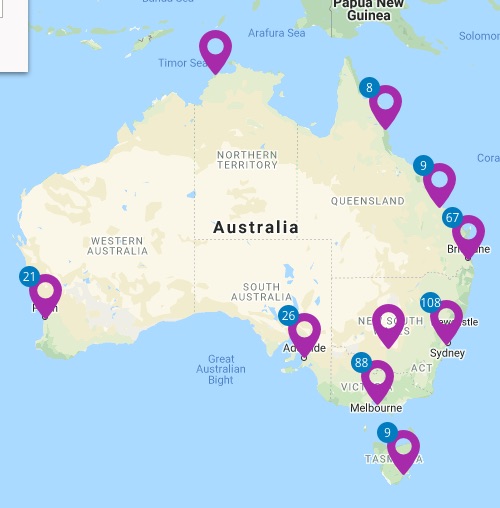 A related question will be the adequacy of air and other retrieval services; in Europe, patients have been flown between countries; for example, from France and Italy to Germany. 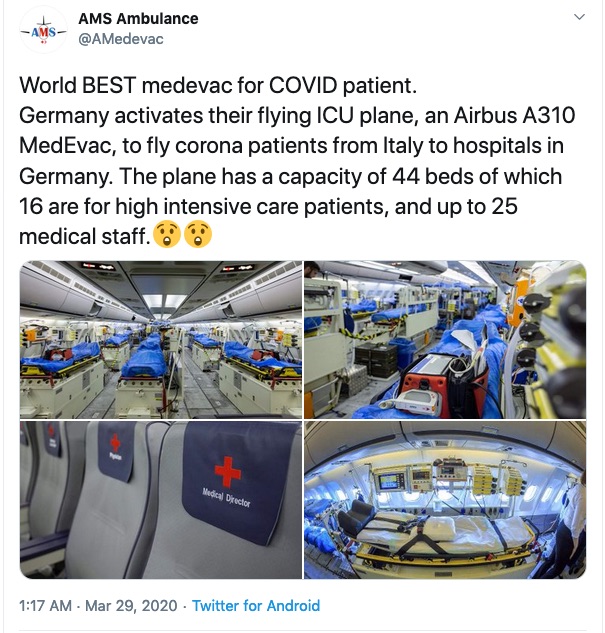 Michael Roff, CEO of the Australian Private Hospitals Association (AHPA), said the “absolutely unprecedented agreement” would make sure private hospitals still existed on the other side of the pandemic, and would be there to help with the inevitable backlog of non-COVID cases.

While each state and territory will have to negotiate their own agreements with private hospitals, Hunt said the Victorian Government was very close to a deal with private hospitals and he hoped the Victorian model would be adopted more widely, with all state health ministers last night committing to reach agreement, hopefully by the end of the week.

Asked if the private sector was being nationalised, Hunt said “We are not taking ownership; we have struck a partnership where in return for the state agreements and the Commonwealth guarantee, they will be fully integrated within the public hospital system.

The Sydney Morning Herald reports plans for prisoners with COVID-19 to be quarantined in private hospitals.

Hunt also lauded the work of the national cabinet, as a unique arrangement in Australian history at a time when “ everyone is dealing with massive pressures on their economic, social and health systems all at the same time”.

“For that integration to occur has been, I think, extraordinary,” he said, suggesting the national cabinet would come to be seen as “one of the amazing achievements of federation”. 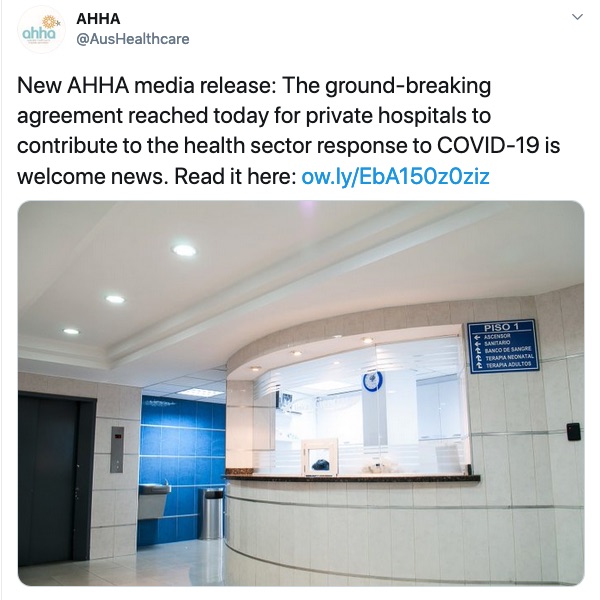 Meanwhile, the Australian Bureau of Statistics has announced the forthcoming release of new statistical products in response to COVID-19.

A new short survey, with data collected from 30 March 2020, will provide information on the actual and expected impacts of the coronavirus on households. Survey information will be obtained on a range of topics including responses to public health messages and whether people have had their hours of work reduced or been stood down. Results will be published in mid-April.

PrevPreviousBiases, fragmentation and flexibility: lessons from Italy’s COVID response
NextCOVID-19: Shut the schools down (but not for the reason you think)Next