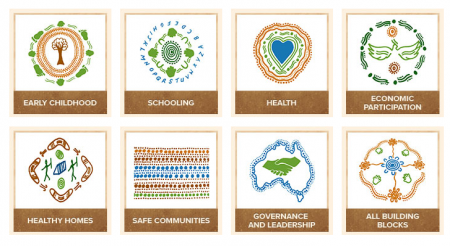 Submissions are being called for the Senate inquiry into “the impact on service quality, efficiency and sustainability of recent Commonwealth Indigenous Advancement Strategy tendering processes” – or the #IASLottery as it’s known on Twitter.

In the post below, Dr Tim Senior looks at how the Strategy measures up against the best evidence on what works to improving Aboriginal and Torres Strait Islander outcomes and comes up with some words of wisdom for Canberra dining.

The image above comes from the Closing the Gap Clearinghouse website, linking to a summary of the Clearinghouse findings about what works for each of the COAG building blocks. 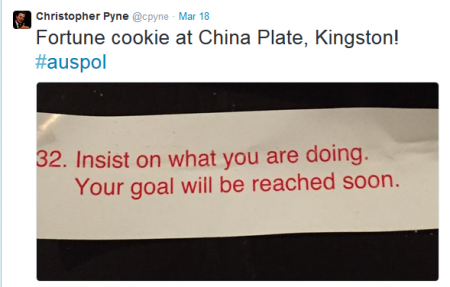 As details of the organisations funded under the Indigenous Advancement Strategy gradually struggle out into the light of day, it leads us to draw some conclusions about the way policy is formulated.

But there is another source of policy advice that would have really helped with the Indigenous Advancement Strategy, and it comes on a government website. The Closing the Gap Clearinghouse collates all the best evidence about what works to improve Aboriginal and Torres Strait Islander outcomes across a whole range of measures. It’s illuminating to look through the summary and compare it to what has happened with the Indigenous Advancement Strategy.

On governance and leadership, this is what the Closing the Gap Clearinghouse says works:

“A flexible approach to designing and funding initiatives. This allows for context-specific factors and a range of different ways to address a specific need. Innovative approaches are needed to secure required funding.”

Does that describe the Indigenous Advancement Strategy? How about:

“A community development approach. Specifically, this entails applying a strengths-based approach, a commitment to empower the community, supporting Indigenous staff, and investing the time and resources into ongoing community consultations to ensure relevance of programs and a shared vision. Sufficient lead times are necessary to allow local ownership of programs to be developed. Community trust needs to be built, with program and community leadership demonstrating a commitment to work through and resolve conflict.”

And this summary of the evidence of what actually works reads like a warning against the methods used for the Indigenous Advancement Strategy:

“Sharing responsibility for shared, realistic objectives and collaborative formulation of criteria and indicators for annual self-assessments, including assessment of the processes as well as the outcomes”

Some of the Indigenous Advancement Strategy funding has gone to government departments, not well known for generating the historic trust of Aboriginal and Torres Strait Islander peoples. Perhaps they misread this point as just saying “You can fund government partners.”

“Continuing investments are made to strengthen the governance and capacity development of both Indigenous and government partners for effective partnership. These efforts start early, and continue over the long term, building on existing community organisations and governance structures”

Perhaps they read this section:

without realising it was in the section at the end on what we know doesn’t work.

Other agencies to get money were churches and church agencies.

“Holistic approaches which work with Indigenous people in ways which take into account the full cultural, social, emotional and economic context of their lives, including an awareness of the ongoing legacy of trauma, grief and loss associated with colonisation.”

Local councils got money, too:

“In the Indigenous context, the community managed and initiated all the {Healthy Lifestyle} programs that were shown to be effective.”

Sporting codes, such as Australian Rugby Union and Hockey Queensland were given money:

“Community involvement was found to be particularly important to the success of early childhood programs. This involvement was needed in the planning and development of programs, not just the implementation”

Maybe that’s not what they’ll be doing. We really don’t know because no information has been published.

“Education practitioners and policy makers need to be well versed in the importance of cultural factors in schooling and development of policies and programs that take account of Indigenous cultures and history should continue. Schools that employ and value Indigenous staff provide ‘ready’ links between school, families and communities, which can enhance the transition to school for Indigenous children.”

There are quite a few universities in the list and some local health districts.

There are some Aboriginal Community Controlled organisations in the list, but they are a long way from being the majority. At first glance it looks like large organisations with the capacity to spend time and money putting together bids have got money. That doesn’t describe many smaller front line services. Those community controlled organisations who have secured some money have got less than they needed, and they will need to apply again in the near future. Which is strange, because the evidence has something pretty clear to say about that.

“In cases where programs demonstrate success, it is important to provide adequate, sustainable resources for long-term, rather than short-term funding.”

It may be that many of those non-Indigenous programs are excellent and will work in the right way. However the lack of clarity about who has got money for what projects makes it impossible to tell how programs have been judged, and again goes against the evidence:

“Sharing responsibility for shared, realistic objectives and collaborative formulation of criteria and indicators for annual self-assessments, including assessment of the processes as well as the outcomes…”

The double benefit of funding Aboriginal community controlled services is that they are effective at reaching and engaging their communities, and also employ Aboriginal and Torres Strait Islander people in doing so. Diverting this money to non-Indigenous organisations makes the task of engagement harder, especially for any that are new to this sort of work.

Looking at the evidence for policy on an area such as Indigenous Advancement is crucial. It ensures that tax-payers’ money is not wasted on programs likely to fail. This pathway ends up, once again, with mistrust and resentment on both sides, where non-Indigenous people say “Look at all this money we’re putting in, and it just doesn’t work” and Aboriginal and Torres Strait Islander people say “Once again, you are not taking us or our culture or our organisations seriously.”

“Respect for language and culture”

“Commitment to doing projects with, not for, Indigenous people.”

As well as a Senate Inquiry into the Indigenous Advancement Strategy, perhaps it’s time we put the AIHW Closing the Gap Clearinghouse evidence in the fortune cookies in Canberra’s restaurants in the hope that the government might accidentally look at it for future funding rounds.

I am employed by Tharawal Aboriginal Corporation, who are listed as receiving money from the Indigenous Advancement Strategy. I was not involved in the tender, and do not know how much or what programs this money is for.

I am a member of the Uniting Church, some of whose agencies have been granted funding.

I have previously done the Sydney Leadership Program, run by the Benevolent Society, who have also been granted funding through the IAS.