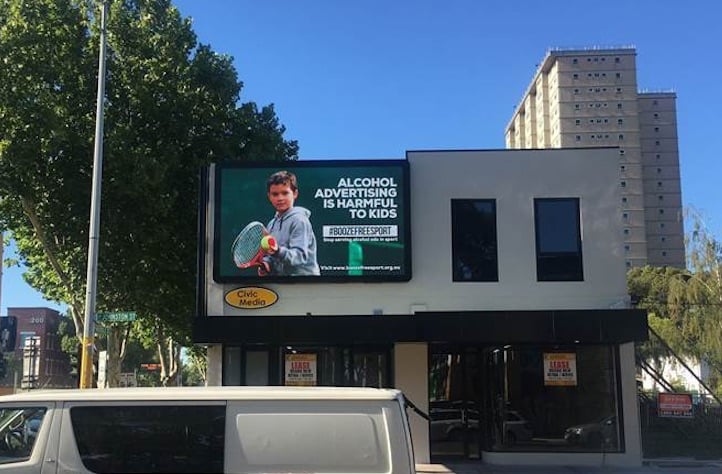 The promotion of alcohol and gambling at the Australian Open has raised public health concerns, especially given efforts by Tennis Australia to engage more children and young people in the event.

Two-thirds of parents are also concerned about the marketing of alcohol during professional sports matches, according to new polling undertaken for the Foundation for Alcohol Research and Education, as reported below by the organisation’s chief executive, Michael Thorn.

Cricket and the football codes are the sports we usually associate with alcohol marketing. This summer Lion’s XXXX brand was highly visible during the Ashes series, having taken over the cricket’s beer sponsorship from CUB’s VB in 2017.

Tennis is rarely thought to be in the same league – less proletarian, more bourgeois perhaps.

Nevertheless, things are changing down at the Rod Laver Arena because this year Tennis Australia has signed up four booze sponsors: Coopers, Jacobs Creek, Canadian Club and Aperol Spritz.

This is a commercial decision that ignores countless surveys showing that Australia’s sports fans hate the intrusiveness of unhealthy brands advertising alcohol, gambling and junk food.

They hate it for various reasons.

There are the obvious and very real health concerns: they don’t want children exposed to harmful products.

There’s the principled stance that alcohol deserves no association with sporting success, as well as irritation that the ads trigger spontaneous demands from kids to purchase some of these products.

And there’s the more practical consideration: Australians do not care for the frequent interruptions to their favourite game.

All told, viewers would prefer for these ads to go away. 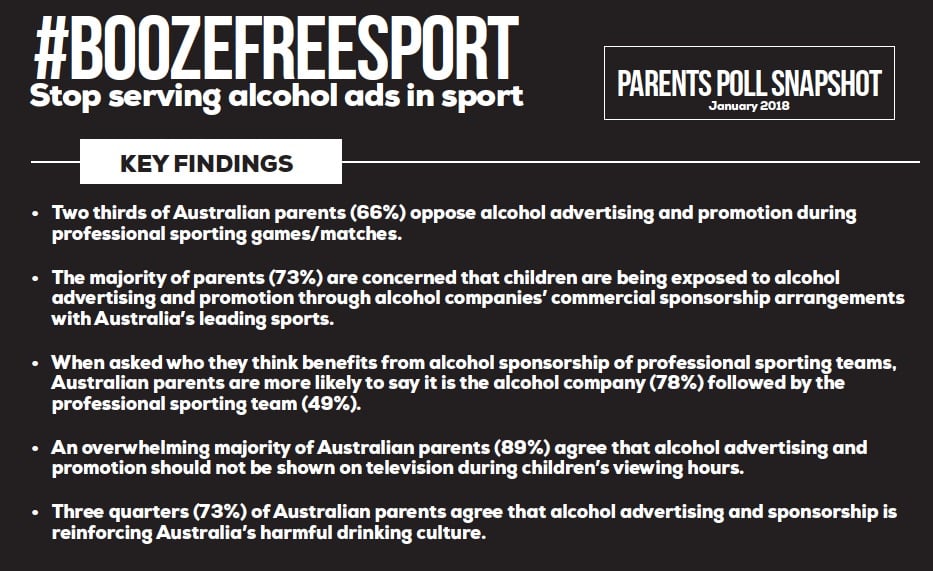 The nexus between the alcohol industry and big sport has money at its centre. Money has repeatedly been shown to influence principles, incite corruption (match fixing) and create unhealthy dependencies between sports administrators, players and the brands.

Professionalising sport has been good for players, spectators and especially administrators. Self-evidently it is good business and historically tennis has been no exception.

The Lavers’, Sedgeman’s and Rosewall’s were all major beneficiaries of tennis being an early mover in this space. Today’s top players are all multi-millionaires.

But the lust for ever more money means long-held values are placed under enormous pressure. Conflicts of interest appear, judgement fails and principles are sacrificed. For instance, non-drinkers Nadal and Djokovic endorse alcohol brands.

Yes, promote these games. By all means make them a pleasurable experience for spectators and viewers, and reward the players well.

But, just as match fixing presents moral and ethical hazards, so too does taking money from unhealthy brands.

Other research by Professor Emmanuel Kuntsche from La Trobe University’s Centre for Alcohol Policy Research shows that kids begin to recognise these brands from as early as age three (see also here).

We also know alcohol brands target children with their advertising. There is little doubt about this.

What they also do is co-opt our sporting icons to enhance these promotions. The sport becomes a Trojan horse.

And to date our only ‘defence’ has been the alcohol industry’s self-regulation of its advertising, which simply does not work. It is a weak regime that is repeatedly ignored, constantly undermined and frequently circumvented.

The simplest and most defensible action to protect children and young people would be to stop their exposure to this advertising by not allowing alcohol advertising, including perimeter advertising in stadiums, while children are watching.

This is what most Australians want, and the Commonwealth Government and the alternative government need to get on board.

Others have: Finland has introduced regulatory measures to restrict alcohol advertising in public places, and France allows no alcohol brands to be associated with sport.

Crucially, sport in these nations is undiminished by governments acting in the public and children’s interests to reduce the risks that these unhealthy brands so obviously pose to the health of the nation.

Nor would such action in Australia diminish sport in our country; I am sure of that.

PrevPreviousHow can we create an inclusive day for all Australians to celebrate?
NextPrisoner health: seven things to know, to make a differenceNext