Part 2: How to save billions in health costs – Ian McAuley

Following on from the previous post by John Menadue, health economist Ian McAuley has some suggestions for how billions could be trimmed from health budgets. He writes:

“As with any policy announcement, there has been a great deal of confusion, some deliberately manufactured, about the cost of the Government’s health reforms, including claims that the reforms will be costly.

Whatever this or any other government does, there will be rising health costs in the future, but that, in itself, need not be of concern provided our economy continues to grow. The government’s reform proposals, however, are about improving the efficiency of health care delivery, so that growth will take place on a lower base.

John Menadue and I have been trying to put a rough estimate on possible cost savings in health care, particularly hospital care – the focus of the Government’s initiatives. Our intention has been to do no more than to obtain a first order estimate – are the annual savings in the order of tens of millions, hundred of millions, or billions of dollars?

In today’s Croakey, John Menadue has looked at specific areas of saving – workforce productivity, better quality control, reduction of subsidies to private insurance, and has found possible savings in the order of billions of dollars.

I have taken a more macro perspective – a “top down” analysis, drawing on the work of the Productivity Commission in its Public and Private Hospitals Discussion Draft, released late last year. The results are similar, confirming Menadue’s estimates. It is no exaggeration to say that the savings could be in the order of $5 billion a year.

As the Productivity Commission has found, there are data deficiencies, but the data provides evidence of widely varying costs in hospitals between different states.  On a casemix-adjusted basis, the cost per separation (essentially an admitted patient) in public hospitals in 2007-08 varied between $3900 in Victoria up to $5000 in Western Australia.

Even after normalizing for casemix, there may remain differences between states due to scale and location. Their data did not indicate any significant scale economy effect except for the very smallest hospitals with fewer than 2000 separations a year.  Nor was there strong evidence of the rural/urban mix having a significant impact.  Only in “remote” and “very remote” hospitals is there a noticeably higher cost.

With these qualifications in mind, it is possible to construct a table based on the assumption that Victoria’s cost per separation is the lowest possible cost (a conservative assumption) and that all other states can meet this cost. 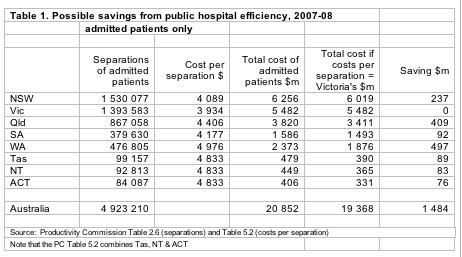 That is, a saving of around 7.1 percent.  These savings apply to admitted patients, which incur about 70 percent of the costs of public hospitals.

Another possible source of saving would ensue if, through improved primary care and public health, hospitalization could be reduced.

According to the Government’s document, A National Health and Hospitals Network for Australia’s Future:

That is, an additional saving of almost 9.3 percent. I stress “almost” because if both hospital efficiencies and a lower rate of hospitalization were achieved, there would be a slightly lower base of savings. After eliminating the small cross-product, there is a combined efficiency saving in the order of about 15.7 percent. Of course there may be a small offsetting rise in primary and preventative health costs.

That would be a saving within the hospital system only. It does not include the wider community benefit of better health.

To bring these figures into perspective, Table 2 shows the latest data on total hospital costs.

These factors are applied to Table 2 to produce Table 3.

To obtain a first order estimate of savings, applying a 15 percent reduction to public hospital recurrent costs only, would save about $5 billion a year.  If applied to only the 70 percent of costs associated with admitted patients, the saving would still be more than $3 billion a year.  And, if applied to all hospital costs, savings could be in the order of $8 billion a year.

Neither John Menadue nor I claim a high level of accuracy, but even if these estimates are out by two or three billion dollars, they show that pursuit of efficiencies is sound public policy. What the government has put before us is short on important details, but the objective is sound, and it is churlish for anyone to dismiss it on the basis of cost, for it is surely about finding significant economies.”

PrevPreviousPart 1: How to save billions in health costs – John Menadue
NextA frontline report from the health reform battlefield: Rudd Vs burokratzNext