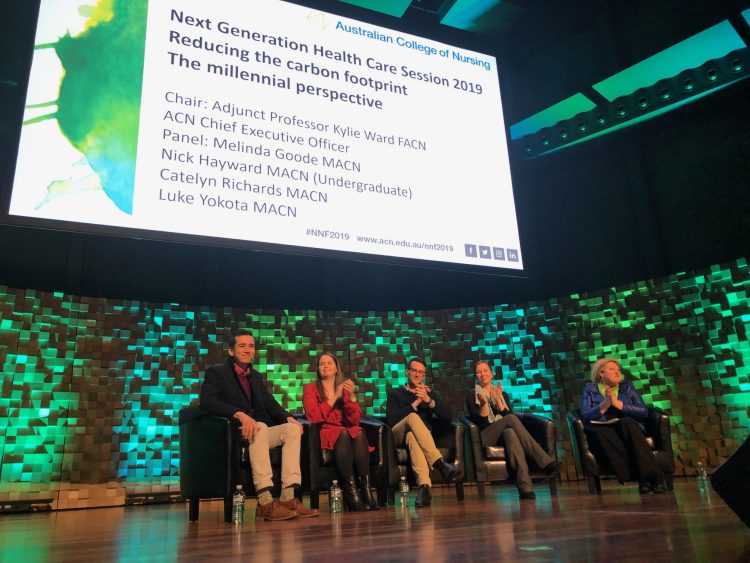 ‘Past the time for politeness’: nurses urged to take action on climate and health

A national nursing conference has put the carbon footprint of the health care system high on the profession’s agenda, and spurred calls for urgent action on the “extraordinary waste” that can be generated in hospitals “in just one shift”.

A plenary panel discussion at last week’s National Nursing Forum hosted by the Australian College of Nursing (ACN) prompted stories of frustration and concern about the carbon footprint of the health care sector which contributes around seven percent of Australia’s greenhouse emissions – about the same as South Australia.

Nurses, students, academics and researchers on stage and in the audience voiced concerns about the terrible waste of food and single-use medical items in hospitals; excessive plastic and glass packaging for medications and devices; and the environmental impact of anaesthetic gases.

One delegate said that the hardest part of her job was that, in relation to recycling and waste, “my work is the complete opposite to my personal practice”.

Speaking later with Croakey, panellist Melinda Goode, a former marine scientist who will complete her Masters of Nursing (Graduate Entry) this year, urged nurses to “ask the tough questions” in their workplaces and in broader policy settings.

“Why do we do the things the way we do them? Why can’t we do them differently? Why isn’t climate change one of our priorities?” she encouraged her colleagues to ask.

“We’re there to treat those impacted (by climate change) but we’re contributing (to it). That doesn’t sit well,” Goode said.

The session also tapped into the work of other delegates, including leading nursing academic Professor Linda Shields, who in retirement is heading a study on a new way of treating hospital waste so it can be used for agriculture or water treatment.

Shields said single-use medical items have helped to cut the rate of infections in hospitals but “we are getting to the point where hospitals are finding it much cheaper to use (them) regardless of the environmental cost, so that’s a really big problem”.

Panellist Nick Hayward, who is in his final year of nursing studies and working as an acute care Assistant in Nursing, said he “couldn’t agree more” with a comment from a delegate that “we are past the time for politeness” on the need for action on climate and health.

If any of us here are not addressing this issue, if we’re not engaging on this issue… looking for solutions and asking questions about single-use products or waste, then you are culpable, you are part of the problem.”

The ACN joined a coalition of health, welfare and environmental groups ahead of the May federal election to call on MPs to recognise climate change as a core public health issue.

However, despite the World Health Organisation (WHO) declaring climate change as “the greatest health challenge of the 21st century”, it did not rate a mention in the Federal Government’s new Long Term National Health Plan.

The Federal Government also has not responded to  calls to develop a Climate Health Strategy that would drive change towards lower carbon operations in the health sector and improve the sector’s capacity to respond to climate threats to health.

The #NNF2019 session heard how hard being “climate friendly” can be in health care.

One delegate talked about how complicated recycling processes can be too much effort for people working under pressure.

Another told of the frustration of a colleague who was a dedicated recycler until they had been told the hospital did not have a recycling contract and everything had gone to landfill anyway.

“Altogether in just one shift there’s extraordinary waste,” he said.

But the session also heard about positive work, including the PVC Recycling in Hospitals program that collects used polyvinyl chloride (PVC) products like IV bags, face masks and oxygen tubing and recycles them into new products including play equipment.

It was started ten years ago as a pilot program at Western Health in Victoria and is now operating in around 130 hospitals and healthcare facilities in Australia and New Zealand, although it needs to sign up more to be financially viable, according to the ABC last month.

The ACN is also taking action as an organisation, collecting the plastic bottle tops that can’t be recycled for Lids for Kids which turns them into prosthetics for children.

The forum highlighted dissonance between overwhelming evidence about the implications for health of climate change and everyday policy, practice and planning.

That included some gentle chiding about the bottled water on stage during a discussion about the over-use of plastic, but was also illustrated by a later presentation on lessons for nursing leadership from February’s “one in 500 year” flooding event in Townsville which did not mention climate change.

Like others, the International Council of Nurses have warned that such extreme weather events are increasing in frequency and intensity as a result of climate change.

Asked in the panel discussion at #NNF2019 what she felt would make a difference, panellist Catelyn Richards, a registered nurse, said it was important to draw the link in mainstream nursing education between reducing the carbon footprint and health.

Like many others in the session, Richards said she sees nurses as uniquely placed for action and advocacy, particularly amid a mounting climate emergency campaign.

I think a lot of people are afraid of the word ‘emergency’ but I can think of a large group of people who aren’t afraid of that word, and that’s nurses.” 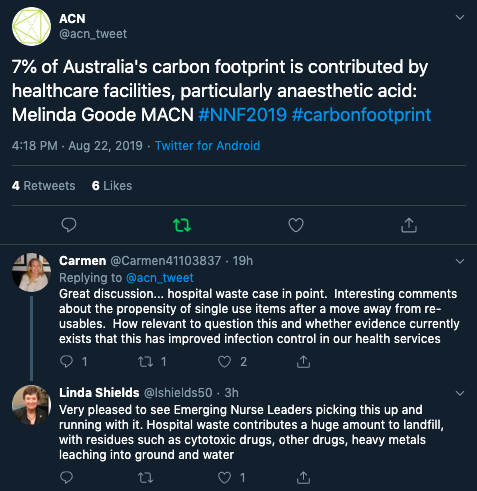 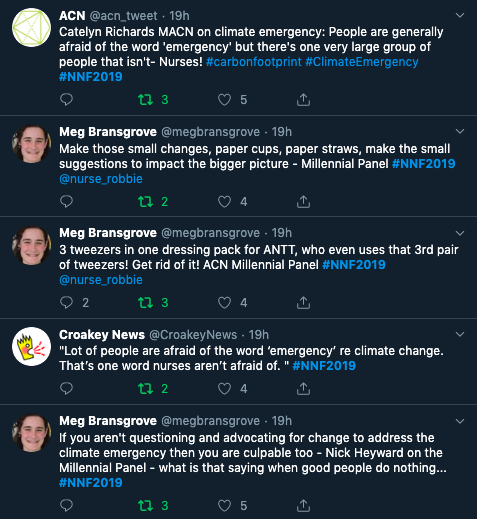 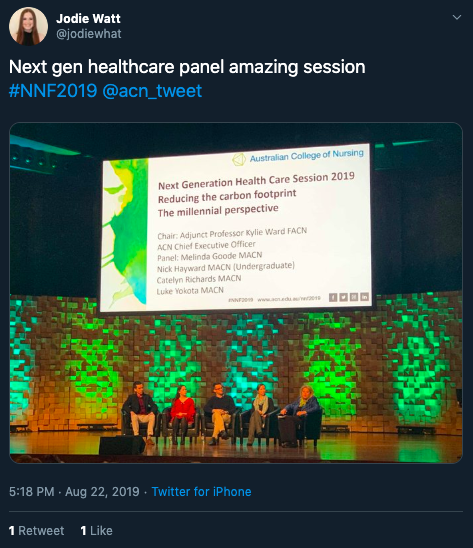 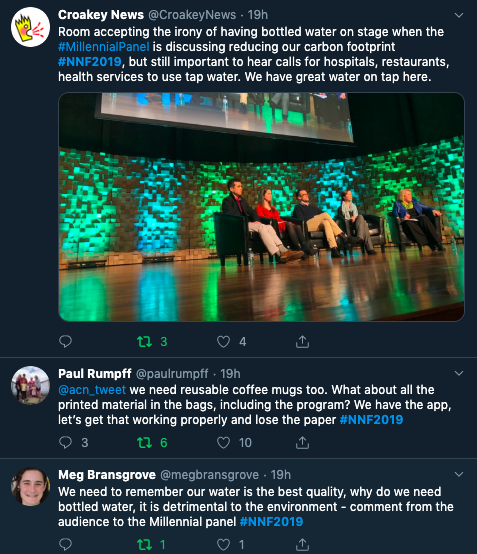 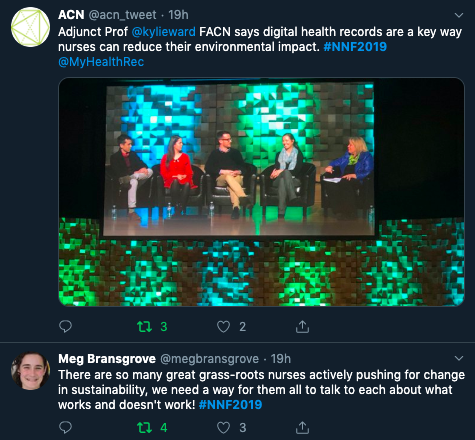 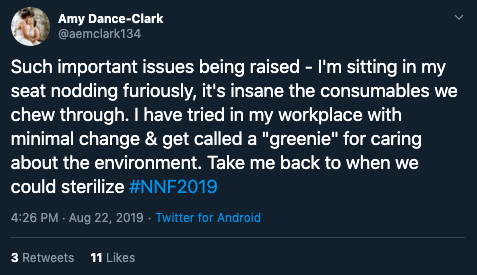 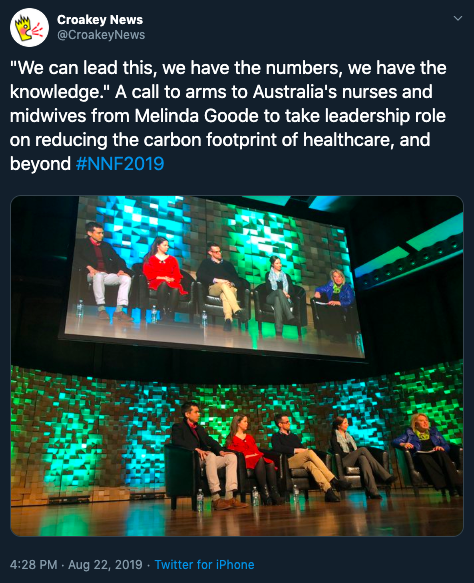 We also sat down with registered nurse Sally Sutherland Fraser, a nurse educator, who has just returned from working in the Pacific where she observed firsthand the impacts of climate change on health systems and health. You can catch our conversation here:

Read more on how hospitals can reduce their environmental footprint.

Climate change has been highlighted at a number of recent medical meetings covered by the Croakey Conference News Service, including the annual congress of Australian and New Zealand psychiatrists and the annual scientific meeting of Australasian emergency doctors.

Earlier this year, delegates to Doctors for the Environment Australia’s annual conference declared a climate emergency, while — at the National Rural Health Conference — Professor Peter Sainsbury called for climate mitigation and adaptation to be codified into national standards and accreditation for health services.